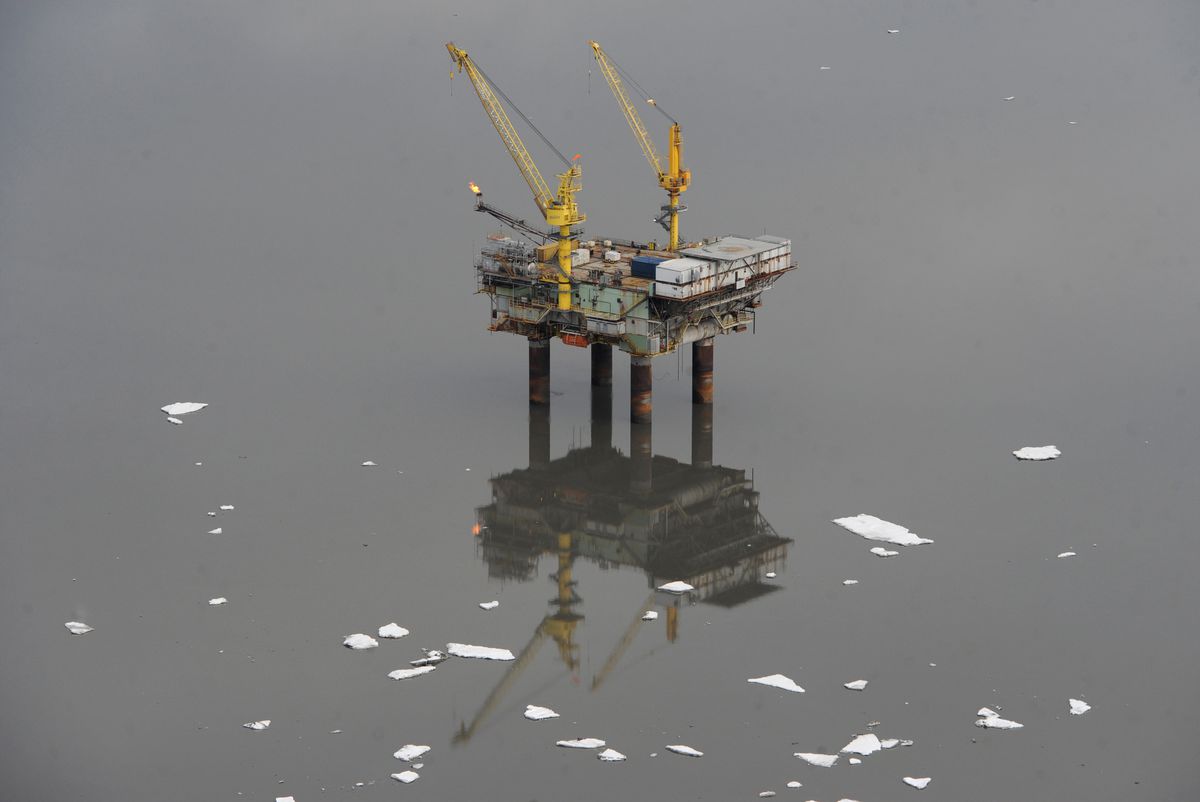 A sheen of oil was discovered at about 11:20 a.m. on April 1 by workers on Hilcorp’s Anna Platform located about 45 miles southwest of Anchorage near the village of Tyonek, on the west side of Cook Inlet. Pan ice and calm water were visible around the platform on Sunday, April 2, 2017. (Bill Roth / Alaska Dispatch News)

A sheen of oil was discovered at about 11:20 a.m. on April 1 by workers on Hilcorp’s Anna Platform located about 45 miles southwest of Anchorage near the village of Tyonek, on the west side of Cook Inlet. Pan ice and calm water were visible around the platform on Sunday, April 2, 2017. (Bill Roth / Alaska Dispatch News)

Hilcorp's oil release from an underwater pipeline in Cook Inlet this month, combined with its natural gas pipeline leak that has been flowing nonstop since December and its third pipeline problem at a different offshore platform, illustrates the dangers of offshore drilling in icy waters and the failure of Alaska and federal regulators to assess competency before issuing leases and permits to oil and gas operators.

The latest incident began last Saturday when workers on the Anna platform felt a violent impact and later discovered a leak of crude oil from an oil pipeline that runs between the Anna and Bruce platforms on the west side of Cook Inlet. The pipeline, which dates from the 1960s, contained nearly 19,500 gallons of pressurized oil.

Hilcorp, which operates both platforms and the pipeline, claims the leak involved only three gallons of oil, a suspiciously low estimate that is being investigated by the Alaska Department of Environmental Conservation. DEC also is reviewing potential penalties, according to news reports. Typically, operators report a low initial spill size and then revise it later once the media focus is gone.

This oil leak followed a natural gas leak that began in December from another undersea pipeline on the eastern side of Cook Inlet. The gas pipeline breach, which Hilcorp did not report until February, was slowed in late March, but repairs cannot be completed until ice conditions allow divers to access the pipeline safely.

Until Gov. Bill Walker intervened — which is not the way these things are supposed to work — neither state nor federal regulators forced Hilcorp to shut down offshore oil production on the eastern side of Cook Inlet. The production was dependent on gas delivered by the breached pipeline so, once production was stopped, the gas pressure could be dramatically reduced, slowing the leak.

The gas that leaked while oil production continued resulted in unknown impacts to Cook Inlet wildlife.

These two pipeline leaks show a lack of attention to pipeline integrity. As bad as these Cook Inlet situations are, spill scenarios in the Arctic Ocean could pose even worse threats. With a more remote location, long periods of floating ice, stormier weather and less shore-based infrastructure to enable a major oil-spill response, a well blowout or leaking pipeline could be extremely difficult to reach and repair.

If pack ice formed before an Arctic well blowout could be stopped, oil and gas could flow into the water column and spread throughout the marine ecosystem for months, endangering fish and whales and, come spring, the sensitive coastlines of areas such as the Arctic National Wildlife Refuge.

Hilcorp's Cook Inlet problems raise questions about why Alaska and federal agencies do not follow the example of European nations that determine a company's competency before granting leases or permits for offshore drilling.

As a member of a National Academy of Sciences committee looking at offshore and pipeline safety regulations, I've learned that Norway and other European countries ensure corporate technical and financial competency before granting leases.

According to the website for the United Kingdom's overseer of offshore operations, "As production licences confer exclusive rights, all the appropriate technical and financial capacity … is an important criterion for the acceptability of a company to be a licensee."

Hilcorp — a relatively new operator in Alaska — has faced multiple, significant fines and enforcement actions by the Alaska Oil and Gas Conservation Commission in recent years, and it appears likely the company will be hit with more penalties for its Cook Inlet failures.

The company plans to build and operate the proposed Liberty project that would produce oil from a nearshore, manmade island in the Beaufort Sea, with public meetings on Liberty's draft Environmental Impact Statement scheduled to begin this spring. Given Hilcorp's problematic operational record in Alaska, should we risk our waters by giving permits to a sloppy operator?

Alaskans deserve better performance from oil and gas companies, certainly before we allow those companies to expand operations.

Lois Epstein is an Alaska-licensed engineer and the Arctic program director for The Wilderness Society.