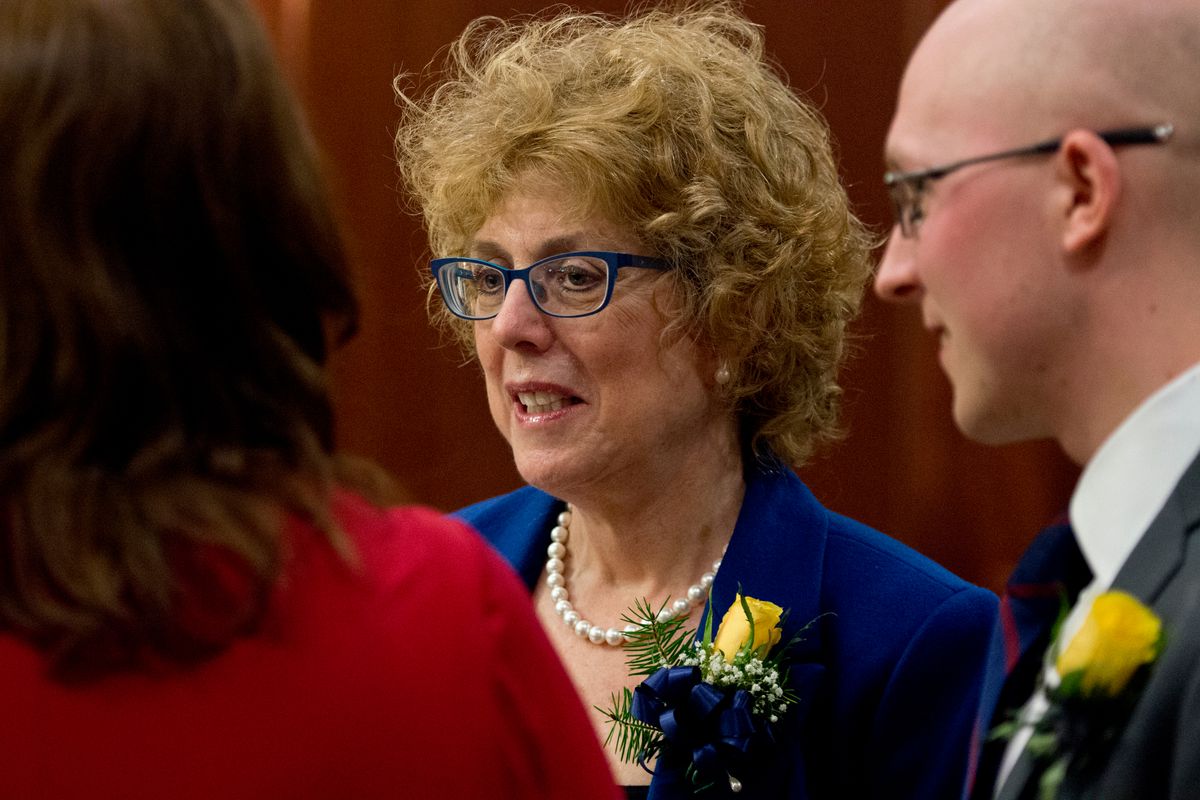 If you must give Rep. Gabrielle LeDoux credit for anything it must be for her sheer, unbridled chutzpah, a magnificent, brassy chutzpah that almost makes you want to cheer for her. It is the kind of audacity that would have a carjacker complaining to his victim about gas mileage.

The Anchorage Republican, who first ran for the House as a Democrat, unsuccessfully, in 2000, ran for re-election last year to her District 15 seat under the Republican banner. There was nothing in her campaign rhetoric or ads suggesting she was a closet Democrat or especially susceptible to leftist cooties or political tit-for-tat. Her constituents bought into her Republican patter, returning her to office with almost 68 percent of the votes cast.

As the session started, LeDoux and Republican Reps. Paul Seaton, of Homer, and Louise Stutes, of Kodiak, jumped ship to join a Democrat-led coalition in taking over the then-GOP-led House. They were rewarded handsomely with key leadership positions. That understandably miffed the state GOP, which is promising to seek, and back, candidates to run against them.

[Alaska Republican Party formally pulls support from three of its own]

What to do, what to do? LeDoux came up with House Bill 200, the "Blah-Blah-Blah, Get Me Re-elected Act." It would change everything about Alaska's primary election rules and likely would boost her chances of being re-elected despite abandoning her party and joining the tax-and-spend coalition. The profound changes she suggests would dilute her field of opposition by putting everybody — Democrats, Republicans, Libertarians, everybody — running for an office on the same ballot in what often jeeringly is referred to as a "jungle primary."

Jungle primaries, or nonpartisan blanket primaries, are a gift from Nebraska, Washington, California and Louisiana. Their avowed purpose is to draw more voters to the polls and increase the number of moderate candidates. They have not worked as envisioned.

Harold Meyerson, editor at large of the American Prospect and an op-ed columnist for The Washington Post, says in an L.A. Times piece the jungle primary is an "asinine idea that can lead to perverse and anti-majoritarian consequence." It is such a lousy idea that New York's Democratic senator, Charles Schumer, known for lousy ideas, in a 2014 New York Times op-ed piece, called for its adoption nationwide to end "polarization in Congress" and partisanship.

Under Alaska's current system, if LeDoux were to run as a Republican in the next GOP primary she would face only Republicans, and, frankly, if the election were today, many believe she would be toast. Her legislation could work to change that.

Primary elections' origins are traced to the progressive movement that peaked in the early 20th century as corporations, railroads and other powerful financial interests jockeyed for political power, triggering widespread and understandable fears of corruption. The lofty idea behind primaries was to move the process of selecting political parties' candidates from behind closed doors and out of smoke-filled rooms.

Across the nation, primary election rules are all over the map. The National Conference of State Legislatures says Delaware, Florida, Kentucky, Maryland, Nevada, New Mexico, New York, Oregon and Pennsylvania have closed primaries today, where only registered party members can vote. That helps keep opposition parties from influencing another party's candidate selection. Thirteen states, Alaska among them, have semi-closed primaries where unaffiliated voters can participate, along with party members.

Nowadays, Alaska's GOP primary is closed to everyone but registered Republicans, nonpartisan and undeclared voters. It allows Republicans to impose the barest modicum of party discipline in selecting candidates. Democrats, Libertarians and the Alaskan Independence Party allow anybody to vote in their primaries (there is a cheap shot in there somewhere).

[Musk Ox revolt: How Republicans lost control of the Alaska House for the first time in years]

There are blanket primaries, where all hopefuls of all parties are on a single ballot. There are nonpartisan blanket primaries — jungle primaries — where all candidates for an office, no matter their political party, appear on one ballot and slug it out. The top two vote-getters — sometimes from the same party — go head-to-head in the general election. It is a chaotic free-for-all, but there is opportunity in chaos. This is the primary LeDoux wants.

If she were to have her way, and nobody believes she will any time soon because Republicans remain Republicans in the Senate, Alaska's primary system would degenerate into something akin to a high school cafeteria food fight. Political parties would tip toward irrelevance and voters would lose interest. Smaller parties would face increased difficulty in getting on the general election ballot.

When you look at the measure, one thing is certain: Politics is tough, dirty business, a calling where you can switch teams for advantage, dodge, wiggle, deflect and then try to change the rules to save yourself. It takes a special kind of person. LeDoux has tons of what it takes.