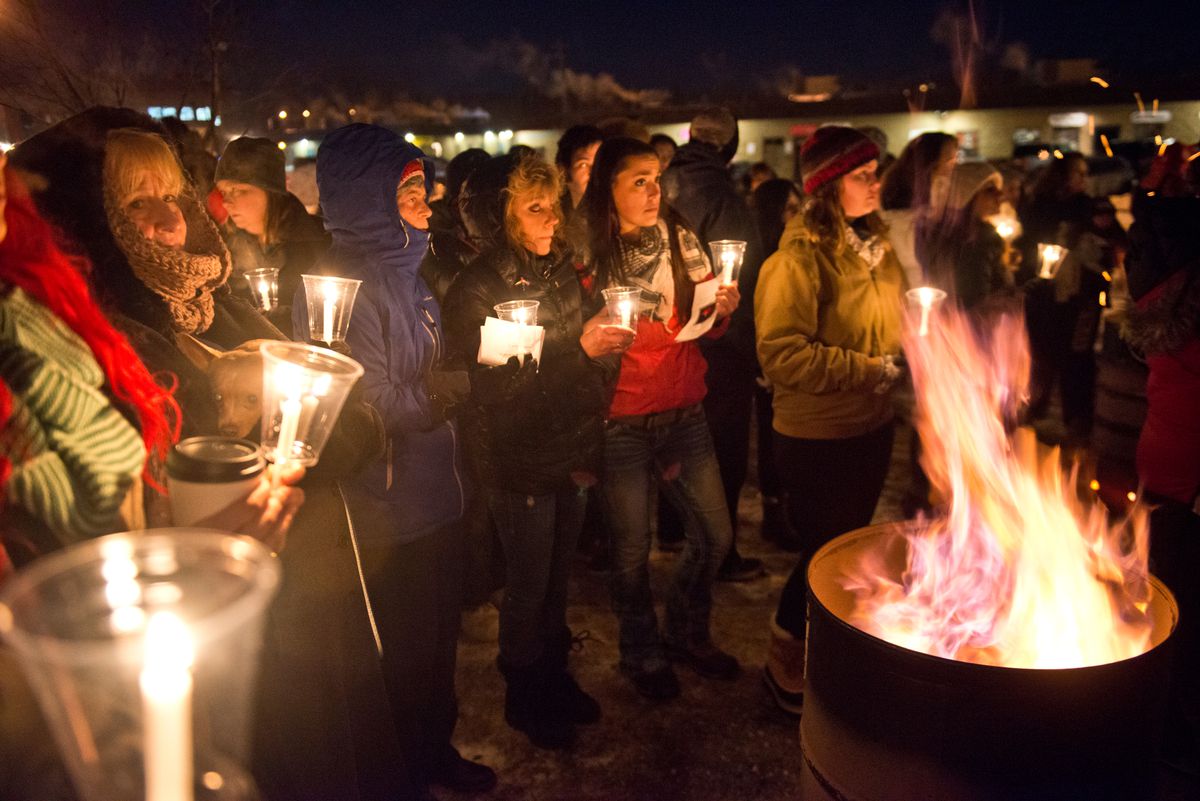 About 100 people gathered at Nunley Park in Wasilla on Tuesday, January 10, 2017, to honor people lost to heroin and opioid addiction and the families they left behind. John Green helped organize the event to fall on the one-year anniversary of the death of his daughter, Kellsie Green. (Marc Lester / Alaska Dispatch News)

About 100 people gathered at Nunley Park in Wasilla on Tuesday, January 10, 2017, to honor people lost to heroin and opioid addiction and the families they left behind. John Green helped organize the event to fall on the one-year anniversary of the death of his daughter, Kellsie Green. (Marc Lester / Alaska Dispatch News)

Medicaid expansion under the Affordable Care Act has been working in Alaska. Since implemented in 2015, more than 30,000 Alaskans previously shut out from routine and necessary care are now eligible to receive it.

Not only does expansion make treatment possible for lower income Alaskans suffering with addiction, it makes it possible earlier in their illness, when treatment is typically less expensive, more effective and has the most potential to prevent the kinds of harm that can accompany addiction, such as homelessness, incarceration, or even death.

This access is important to Alaskans now more than ever. Since 2012, rates of opioid-related deaths in the state have been twice the national rate. Since 2011, between 100 and 125 Alaskans annually have died from an opioid overdose, making it the state's leading cause of death behind cancer, heart disease and traffic fatalities.

During this time, our state also has seen rising rates of children being removed from their homes because of their parents' struggles with addiction, along with record high incarceration rates for drug-related offenses.

Considering these numbers, early access to Medicaid-provided behavioral health services should be viewed as an investment, not an expense. The National Institute on Drug Abuse conservatively estimates for every dollar spent on addiction treatment, another 12 are saved in societal and health care costs.

Just last month, the McDowell Group released a report that estimated alcohol abuse cost Alaska $1.84 billion in 2015. This has significance and should be seen as an opportunity as the state tries to balance our $3 billion budget deficit.

Some see Medicaid expansion as a handout, an entitlement for people who aren't willing to take care of themselves. That is backward.

Addiction tends to rob people of their ability to work and contribute to their community. Early substance-use intervention helps keep people employed, in their homes and with their families.

Because Medicaid pays for about a third of behavioral health treatment costs statewide, it is among our greatest tools to help fight the state's opioid epidemic, a crisis so threatening to Alaskans, Gov. Bill Walker has declared it a state of emergency.

The ACA is far from perfect. Incentives that help improve care and reduce cost are not quite right and high premiums, co-pays, and deductibles have resulted in many not being able to afford the care they need.

I appreciate Alaska Sen. Lisa Murkowski, acknowledges both what is not working and what is. Murkowski has indicated her unhappiness with ACA in its current form, stated her concerns about destabilizing the portions of ACA that are working – such as Medicaid expansion – and is willing to put the work in to make it right for Alaska.

Similarly, Sen. Dan Sullivan has reached out to constituents and spent time with them to be sure that their concerns are heard.

It might seem some in Congress have abandoned their attempts to dismantle ACA, including a rollback of Medicaid expansion, but Alaska Rep. Don Young has warned the fight is not over. Young also opposed the recent ACA replacement bill, in part because of the harm it would have caused Alaskans.

He is now calling for a bipartisan repeal done over time that does not reduce access to care for Alaska's neediest.

[Opioid tax is no cure for what ails us]

We applaud Young's emphasis on access to care, and underscore what Alaskans need is access to meaningful care; care delivered when and how it can have the most impact.

Where treating substance-use disorders is concerned, NIDA says this means intervening earlier, treating the person over a sustained period of time and providing effective recovery support. Medicaid expansion has made timely and consistent behavioral health care more possible for Alaskans than ever before.

The recent ACA replacement would have resulted in drastic cuts in federal Medicaid spending, putting the state on track to lose a significant portion of the money Alaskans rely upon to combat opioid and other addictions. That's because as an expansion state, every state dollar spent on Medicaid is matched by the federal government.

We are struggling to meet the demand for mental health and substance abuse services as it is. It's hard to imagine that we would be able to sustain the level of treatment services available today with the loss of the enhanced federal match given Alaska's fiscal crisis.

No matter what ultimately happens to ACA, we need to remember that treating and preventing addiction saves more money than it costs, and the combination of federal and state Medicaid funds is saving Alaskan lives.

Tom Chard is executive director of the Alaska Behavioral Health Association, a group of 60 profit and nonprofit, tribal and nontribal centers treating adults and children across Alaska for addiction; www.alaskabha.org.