How one Anchorage teacher is working to help every student succeed 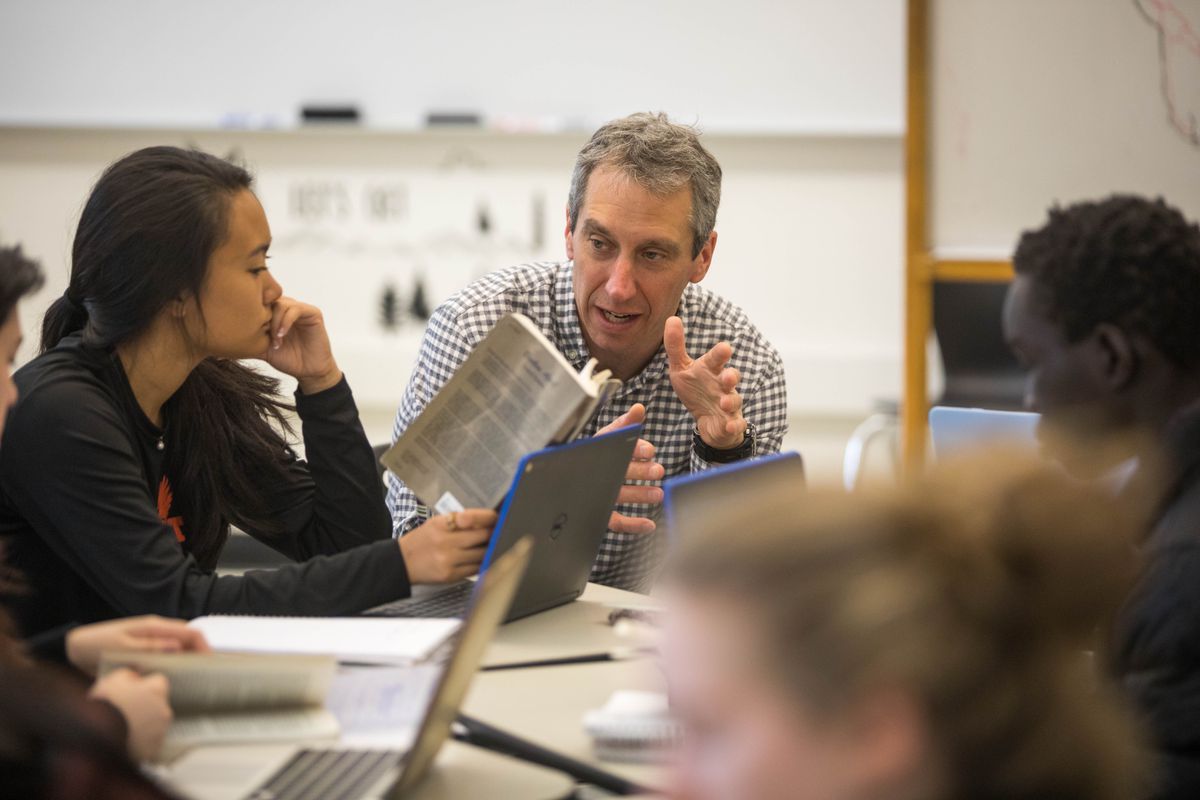 Critics call Alaska schools a failure and point to statistics, but parents seem happy and stay with the system. Teachers like John Ruhlin are a reason why.

Ruhlin's International Baccalaureate program at West High offers college preparation like that given at elite schools outside Alaska. Students who do well in the IB program can enter many colleges as sophomores.

But unlike expensive private high schools or public schools segregated by race and income, Ruhlin's program is open to all. Students at the IB graduation on Friday looked as diverse as the school, ethnically and economically — and West is among the most diverse high schools in the nation.

This is the strength of our school district that is easily overlooked by its critics. We serve everyone.

Students who don't speak English or who live on the streets walk the same halls at West as Ruhlin's accomplished students, including the one who plans to attend Cambridge University and another who missed the ceremony because he was at an engineering orientation at USC.

"You just have to be willing to roll up your sleeves and do the work," Ruhlin said.

Education equity — the idea that every student deserves an equal chance — motivated Ruhlin from the beginning of his career.

He grew up in Ohio, but went to Puerto Rico to work in a youth center, setting up a library and tutoring children. Later, he worked in Washington, D.C., for Reading Is Fundamental, a program providing books to poor children.

Travel for that program first exposed him to Alaska and the "wow" moment when he realized this was where he wanted to be. When his job ran out, he and his wife, Robyn Hicks, also a teacher, came here as VISTA volunteers.

Before getting his teaching credentials and joining the school district, Ruhlin taught job skills to Anchorage girls who had dropped out of school because of pregnancy.

A teacher with that resume wouldn't be expected to end up in an IB program. The gifted, honors and advanced-placement educational tracks mostly serve privileged students who grew up with books and high expectations at home.

[Why Alaska is the most equal of the states]

Education begins at birth. By the time children reach kindergarten, those with well-educated parents have usually been to preschool and may be reading. Children from stressed and underprivileged families sometimes begin school without proficiency speaking even their first language.

In much of the U.S., schools are segregated. Upper-income families send their children to public and private schools serving wealthy, all-white areas, with high standards, excellent facilities and low teacher-student ratios. Schools in low-income areas have fewer resources, worse facilities and larger classes.

This system enlarges and confirms inequalities. In most other developed nations, children from lower income families have a greater chance of moving into a higher social and economic class than in the United States.

In Alaska, we do better. Every student has a shot at college prep instruction in a free public school system with lots of choices.

But they still need the luck to avoid getting tracked into low expectations. At West, that luck looks like John Ruhlin.

Each spring, Ruhlin goes through 10th-graders' transcripts, looking for students who might benefit from learning new ideas and ways of thinking — the rewarding world of the mind.

He recruits recent immigrants and students who receive free lunch because their families can't afford food. He doesn't pursue those who have educational gaps or signs that they haven't tried hard in the past, but he also doesn't focus only on the great brains.

"I'm primarily looking for kids who are motivated and who have a shot at it," he said.

IB is an elite program worldwide, with standards that are the same across many countries and exams that are graded by international experts. But unlike some other challenging programs, like the College Board's Advanced Placement, it focuses on inquiry and critical thinking rather than test cramming.

[Imagine a school without walls or class periods. Now imagine it's a Republican idea.]

One of the students at the IB graduation ceremony Friday didn't speak English until fourth grade, Ruhlin said. A past student couldn't graduate from West because of a lack of credits from living in Mexico, but got an IB diploma and was admitted to Oregon State University with sophomore standing.

More than 200 students take at least some IB classes at West, but only 13 made it all the way through the rigorous requirements, including studying the theory of knowledge, writing an extended essay, and doing creative and community service work, to receive a sash at the IB diploma ceremony.

Each student gave a short speech. As I listened, I realized that their comments were, in many cases, more insightful and clearly expressed than those of the faculty members who introduced them.

"IB has helped me shift my perspective of what education should be," said Daniel Luna-Sanchez. "It really makes you think about what we know and how we know it."

Isabel Azpilueta said, "Being in high school is kind of hard, but being able to be in a program to get to think of the world in a different way is really worth it."

"The way this complex material is presented is really interesting. We're given a lot of freedom to be creative," said Salem Collins. "I think it's made me a more open-minded person."

"My perspective on education changed. I started taking things seriously," said Santiago Cedano. "The thing that's come out of the IB program is, all you've got to have to meet your challenges is the will to do it."

Ruhlin takes seriously the IB mission to make the world a better, more peaceful place. It's encouraging that making school more interesting is part of that.

"In every case, there's something about enjoyment, about students being inspired," he said.

Some of these students will do great things. Without Ruhlin's efforts to recruit them into a program that challenged and inspired them, their future, and ours, would be poorer.