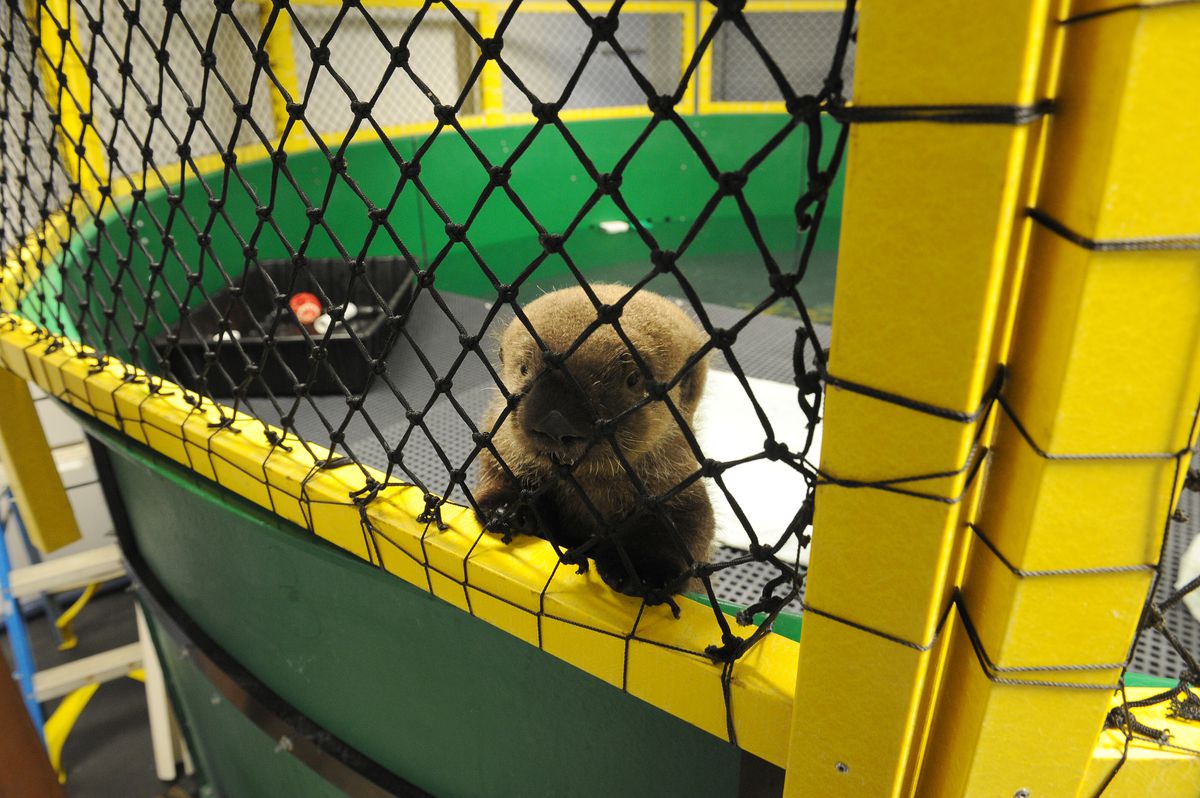 A young male sea otter is cared for at the Alaska SeaLife Center in Seward on May 4, 2017. (Bob Hallinen / Alaska Dispatch News)

A young male sea otter is cared for at the Alaska SeaLife Center in Seward on May 4, 2017. (Bob Hallinen / Alaska Dispatch News)

SEWARD — After a two-year die-off of Alaska sea otters, the world's aquariums have no more room for orphaned pups. Surplus otter babies have been euthanized or left to die.

The Alaska SeaLife Center has a 2-month-old sea otter that will go to Lisbon, Portugal, if an aquarium there can meet animal welfare requirements, said Brett Long, the Seward center's husbandry director.

The Portuguese aquarium is paying the cost of approximately $20,000 a month to give the pup 24-hour care in Seward. Even as adults, otters are difficult and costly to keep, eating up to 20 pounds of restaurant-quality seafood a day.

[Sea otters are dying in unusual numbers off Alaska's coasts, and no one knows why]

One more pup could go to Portugal, but after that it may be years before another slot opens up worldwide, Long said. And otters that come in younger than six months cannot survive in the wild after being raised in captivity.

Before the recent biological upheaval in the Gulf of Alaska — with massive bird die-offs, toxic algae, dissolved sea stars and abnormally warm water — the center got perhaps one otter pup a year. Over the last year and a half, 15 orphaned pups have been found.

A streptococcal infection, perhaps boosted by warm waters, could have caused the spike of deaths that created the orphans. No one knows for sure. Otters are plentiful in Kachemak Bay, where most of the carcasses have been found.

Half of the orphaned otter pups went to aquariums, Long said. Pups that can't be placed are left on the beach or euthanized at the center or by a local veterinarian, said Joel Garlich-Miller, a biologist with the U.S. Fish and Wildlife Service.

(I first learned of the excess pups from a report by KBBI's Shahla Farzan on Alaska Public Media.)

When boaters pick up a stranded pup without first calling the SeaLife Center's stranding hotline, the animals often must be put down, Garlich-Miller said. Always call first.

In one case, Long said, a person who found an otter pup refused to leave it behind and tried to care for it (a violation of the Marine Mammal Protection Act, although the law was not enforced). The pup starved in about a week, he said.

Nature would have taken care of it better.

Baby sea otters are the world's cutest animals. Having watched a pup at the SeaLife Center guzzle from a baby bottle, I'm pretty sure of that fact. Otters are fuzzy and playful and astonishingly easy to think of as human.

Even otters' organs look human. Traditional Chugach Natives believed the resemblance occurs because otters were created from a man engulfed by the tide. They would treat otters found dead on land as if they were dead human beings.

Otters float on their backs on the waves while eating shellfish, like human couch potatoes. Pups adorably ride on their mothers' chests. In rough weather they float alongside and link paws to avoid getting lost.

But as easy as it is to think of otters as little people, up close they're voracious predators and intimidating wild animals. Adult males often weigh more than 70 pounds, with sharp teeth, strong jaws and bodies of concentrated muscle.

The contradiction between otters' image and otters' reality parallels humans' belief in our omnipotence over nature alongside our actual incompetence in fixing what we break.

I learned this lesson during the Exxon Valdez oil spill, when, as a reporter, I watched angry, poisoned otters being captured and housed in a rehabilitation center built in a Valdez gym. Volunteers devoted themselves to the otters and Exxon spent more than $90,000 apiece to heal them.

But the care was really torture. Tracking studies showed half died soon after their release. The captive otters may also have carried disease to the healthy wild population, killing more. (Today, the SeaLife Center is far more careful with those issues.)

The government muzzled scientists who delivered bad news about the oil spill otter rescue. The U.S. Fish and Wildlife Service canceled research by biologist Charles Monnett and blackballed him from future work, as I documented in my book "The Fate of Nature."

With too few aquarium slots for the otters, the alternative to release would have been admitting we could not save oiled otters and euthanizing them humanely.

But that imagery would have hurt the oil industry. Since admitting we couldn't fix nature wasn't an option, the otters paid the price.

Otters in Prince William Sound didn't recover from the spill and lingering contamination until 2014, after 25 years, according to a report by the U.S. Geological Survey.

I don't object to all animal rescues. The SeaLife Center is doing good work to prepare a professional rescue in case of another oil spill, which would be valuable if it affects a threatened species.

A decade ago, my family and I rescued a young harbor seal stranded near our cabin on Kachemak Bay, after checking with the SeaLife Center and following instructions to monitor the pup 24 hours to make sure it was really orphaned.

Seals usually thrive after release, but the work does the species no real good. Numbers are plentiful and the mortality of young is a normal part of their story. But our seal did us a lot of good, and did good for those who saw it nursed at the center and released.

Aquariums create a sense of connection to nature. That is valuable, even if it is sometimes based on illusion.

Long said six otter pups the SeaLife Center sent to Denmark and France two years ago have since been viewed by 1.2 million people. Those people were exposed to educational material about conservation, including climate change.

We don't understand the mysterious biology of dreadful changes happening in the Gulf of Alaska. Most people don't care. But we do care about cute otters that look like us, and perhaps they can be our guides to become better residents of the planet.