Alaska must stand for science and sense 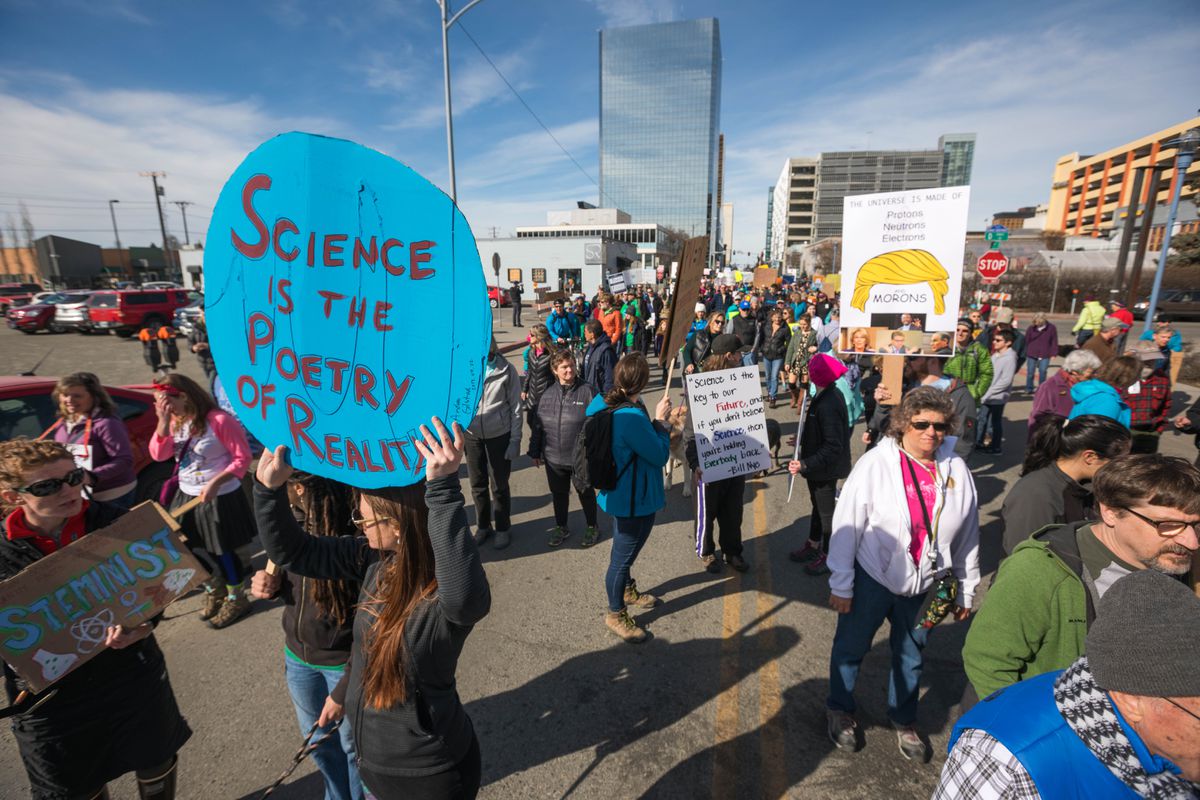 Andrea Gilstad holds a sign that says “science is the poetry of reality” during the March for Science on Earth Day, April 22. (Loren Holmes / Alaska Dispatch News)

Andrea Gilstad holds a sign that says “science is the poetry of reality” during the March for Science on Earth Day, April 22. (Loren Holmes / Alaska Dispatch News)

A recent story reported this week that five scientists were relieved of their positions on a science advisory panel for the Environmental Protection Agency. The only reason given was that they were, well, scientists. And so, the unrelenting elimination of science from our national administration continues. I couldn't help but to reflect on the March for Science that took place in Anchorage and all across the nation a couple of weeks ago and what it means for our state.

It was a warm sunny spring morning about 10 a.m. as I walked to the Delaney Park Strip. It seemed to be the perfect day for a community march. It was 40 degrees higher than the 10-degree snowy morning in January when I joined a couple of thousand Alaskans who came together for the Women's March. Yet in a way each day was the perfect environment — weather and all — for physically experiencing and publicly expressing shared community values and the spiritual uplift of making a public statement of where we stand.

My first reaction to a March for Science was "Are you kidding me?" That's kind of like march for math or biology. Why would you have to march and protest for that? Even more surprising, I had been asked to speak even after I confessed to failing freshman chemistry.

But as I approached the assembly area on the Park Strip, I saw about a thousand people, all ages and backgrounds, many with hand-painted signs, and all enthusiastic and in good spirits. The focus was demonstrating a shared understanding of the need to save our values and our lives at a time when a new administration and Congress had declared war on science and the environment.

• Holly Martinson, an Anchorage-born doctor of cancer biology told of the recent $6 billion cut to the National Institutes of Health that eliminated 90 percent of the research grants for advancing effective cancer therapies.

• Elizabeth Snyder, an Anchorage professor at UAA for Alaska food security with a doctorate in environmental public health and soil and water science, explained the need for scientists to come out of the closet and describe the consequences of ignoring science in our public policy.

• Kate Troll, an author with a graduate degree in forestry and environmental studies and a well-known fisheries expert, said that "science, like truth, must be valued above politics, not brought down by politics. When this happens society benefits."

• Danielle Stickman, an Alaska Athabascan with a degree in environmental science, movingly called for action by Alaskans by saying, "Response needs to be together. Just like the Earth didn't come to such a state of disease by one individual, the healing will not happen by one individual."

• Rick Steiner, a retired professor of marine biology at UAF and co-founder of the Prince William Sound Science Center, clearly stated, "Why is science under assault? Because those who have profited by damaging the environment don't want to hear the scientific truth and don't want others to either." He boldly called for "cardiac shock paddles to a comatose democracy!" He said we should demand Congress restore the $54 billion cut from science and cut that amount from the larger budget increases to the military.

The response to the speakers was loud and enthusiastic. It caused me to reflect on what should be Alaska's response to the dismantling of the research science, the regulatory aspects, and the resource management of the EPA, the Department of Interior, the National Oceanic and Atmospheric Administration and the National Institutes of Health.

There is no question there will be an enormous gap in the support and services that are provided to all aspects of Alaska life. What will responsibly fill that gap? I couldn't help but ponder the irony of the incessant and opportunistic political rant — that always seems to win votes — of doing away with "federal overreach." We are somewhat like the dog that always chases the car and suddenly catches it. What do we do now?

It's really crystal clear. I believe there is a new mandate for Alaska political leadership. Take responsibility. Alaska can — and must accept the responsibility for clean water, clean air, protection of our fish and wildlife, adapting and mitigating the extreme climate changes in the Arctic, and providing for a more sustainable economy. We cannot allow politicians with thinly veiled excuses let the chaos and anarchy of a failing federal system determine the answers to these issues. Our constitution requires stewardship, sustainability and development for the maximum public benefit. It's time to live up to those standards.

• Alaska should have the nation's model Clean Water Act protecting our salmon, our rivers, our coastlines and our people.

• Alaska should have an exemplary Clean Air Act that prevents industrial pollution and places the cost of pollution prevention on the source and not the public's health.

• The state of Alaska should be the national leader for protecting habitat and managing its fish and wildlife based upon ethical, sustainable, science-based policies that promote the economy, food security, culture and spirituality of these resources.

• Our communities, tribes and state must work together to reduce our carbon footprint and create sustainable economic progress.

• Our university should be the center for Arctic science, engineering, food security and health, North Pacific fisheries, and Arctic wildlife biology and management. Yet the senseless budget cutters have put that valuable investment on the chopping block.

• We should gather our best and brightest as a commission to advise — and demand — our elected leaders adopt policies for the extreme consequences of the dramatic Arctic climate changes that threaten this and future generations of Alaskans.

There is a powerful movement taking place as we face troubling times. This movement is about people connecting to affirm and then protect our basic values. In this democracy people still have the power that overreaches the power of special interest. Let's exercise it — now.