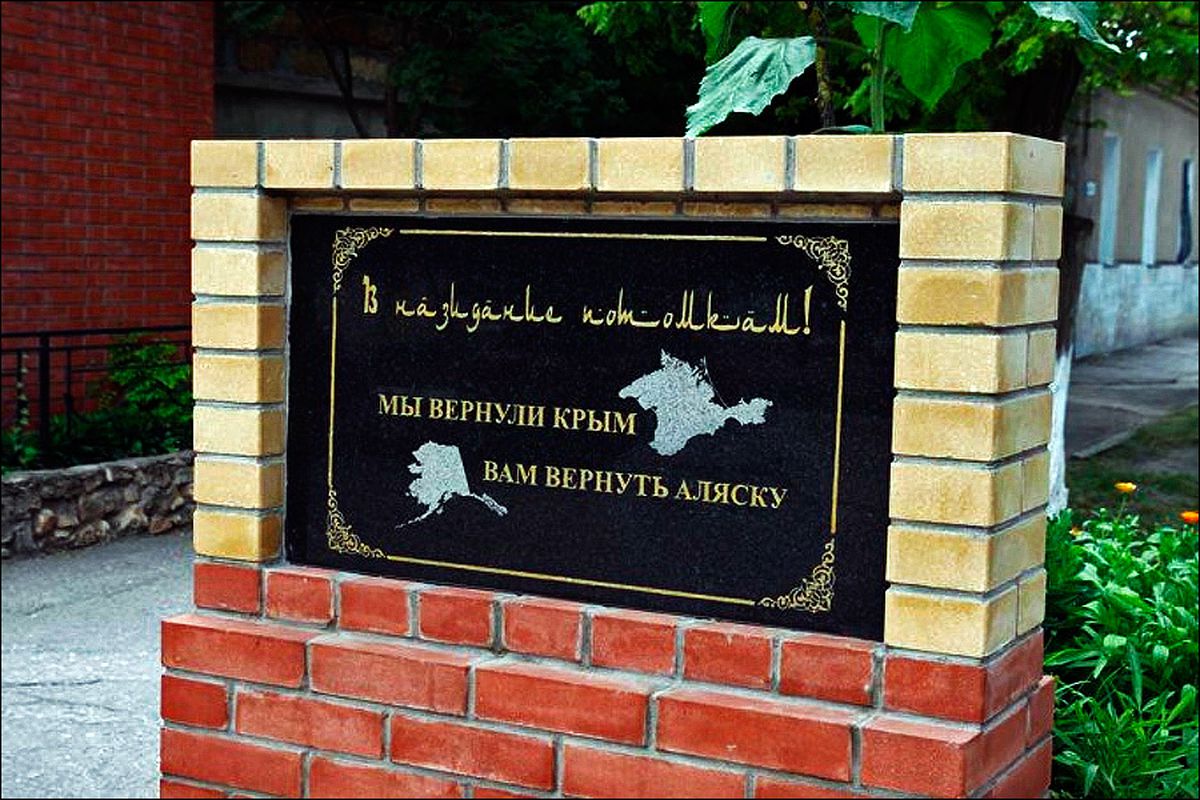 This stone and brick memorial was erected in the Crimean resort town of Evpatoria in 2014. The sign reads, “To Future Generations: We Returned Crimea, You Are to Return Alaska.” (Photo courtesy Prof. Andrei Znamensky, University of Memphis)

This stone and brick memorial was erected in the Crimean resort town of Evpatoria in 2014. The sign reads, “To Future Generations: We Returned Crimea, You Are to Return Alaska.” (Photo courtesy Prof. Andrei Znamensky, University of Memphis)

Russia did not sell Alaska to the United States in 1867. The Russia government only leased the region to the U.S. for an indefinite span of time. Now there are many in Russia who think the span has run its course, and they want Alaska back.

Czar Alexander II, who orchestrated the sale of Russian America, was a mean-spirited and corrupt liberal whose weak mind was captured by a Jewish-capitalist cabal bent on stripping Russia of its historic lands in Europe and in America. The bomb that killed him in 1881 struck a righteous blow for the Russian motherland.

[Myths about Alaska purchase have a long reach]

The Russian fur trappers who first encountered the Natives of Alaska in the Aleutians and later in the Alexander Archipelago treated them with compassion and benevolence, nurturing their values while at the same time teaching them the beneficence of Russian culture and civilization, unlike the Americans later who used every method to destroy Native culture and make Alaska Natives victims of capitalist exploitation.

Such resistance as the Russians encountered from the Natives was instigated by the Americans who supplied them with guns and alcohol for the sole purpose of demoralizing and incapacitating them. The Natives were too incompetent to fend for themselves and only the instruction and leadership they received from the Russians allowed them to survive and ultimately prosper as they did under Russian tutelage.

The history of Alaska as written by Americans is a calculated distortion of the historical reality, written by capitalist lackeys. The Russian people today call upon their government to take back Russia's rightful, historic homelands, of which Russian America was an integral part.

In virtually any train or bus station in Russia today, in sidewalk kiosks, in bookstores, in libraries, one finds this representation of Alaska and of the sale of Russian America, in purported histories, in novels, and in feature articles, a story of Russia betrayed.

It is a favorite theme of extreme Russian nationalists. It plays well in Russia today where the ruling oligarchy's wealth and power has led to confusion and instability and crushed the promise of freedom and widespread economic opportunity so hoped for after the collapse of the Soviet Union in 1991.

As portrayed by 2015 Nobel laureate Svetlana Alexievich, who has written extensively about post-Soviet Russia, countless Russians today blame Gorbachev and Yeltsin for the chaos in Russia, and long for the stability and reliability of Stalinist Russia, where despite deprivation and fear, life was predictable.

[Russian performer uncovers raw feelings about the Alaska purchase of 1867]

Though probably sighted by the Cossack Stepan Andreyev in 1764, a party from the U.S. Revenue Cutter Corwin were the first explorers to land on the island, in 1881, which they claimed for the U.S. The naturalist John Muir was aboard.

In 1911 two Russian icebreakers landed on the island, and in 1916 Czar Nicholas II proclaimed it Russian territory.

Wrangel Island has been icebound most of its known history. In 1914, members of a Canadian scientific expedition were marooned there for nine months. In 1921, Vijhalmur Stefansson sent five people to claim the island for Canada; only one, the Inuit woman Ada Blackjack, survived.

The party that rescued her in 1922 left an American citizen and 12 Inuit Natives on the island. The saga of their rescue in 1924 is a diplomatic tragicomedy. Russia has occupied Wrangel Island since 1924. Today it is an environmental preserve.

Extreme American nationalists argue Wrangel Island is American territory, based on the Corwin landing and the 1922-24 sojourn by the American Inuit. The claim led to an interesting trial before the Alaska Supreme Court, and to charges that President Barack Obama betrayed America when he, as other presidents, refused to act on the claim.

Wrangel Island is no more American than Alaska is Russian. Such claims may serve false ideologies well, but they serve true history not at all.

Steve Haycox is professor emeritus of history at the University of Alaska Anchorage. Material for this column was drawn from "History with an Attitude: Alaska in Modern Russian Patriotic Rhetoric," by Andrei Znamensky. www.jstor.org/stable/41052300