70 years in the family: The cabin on the lake 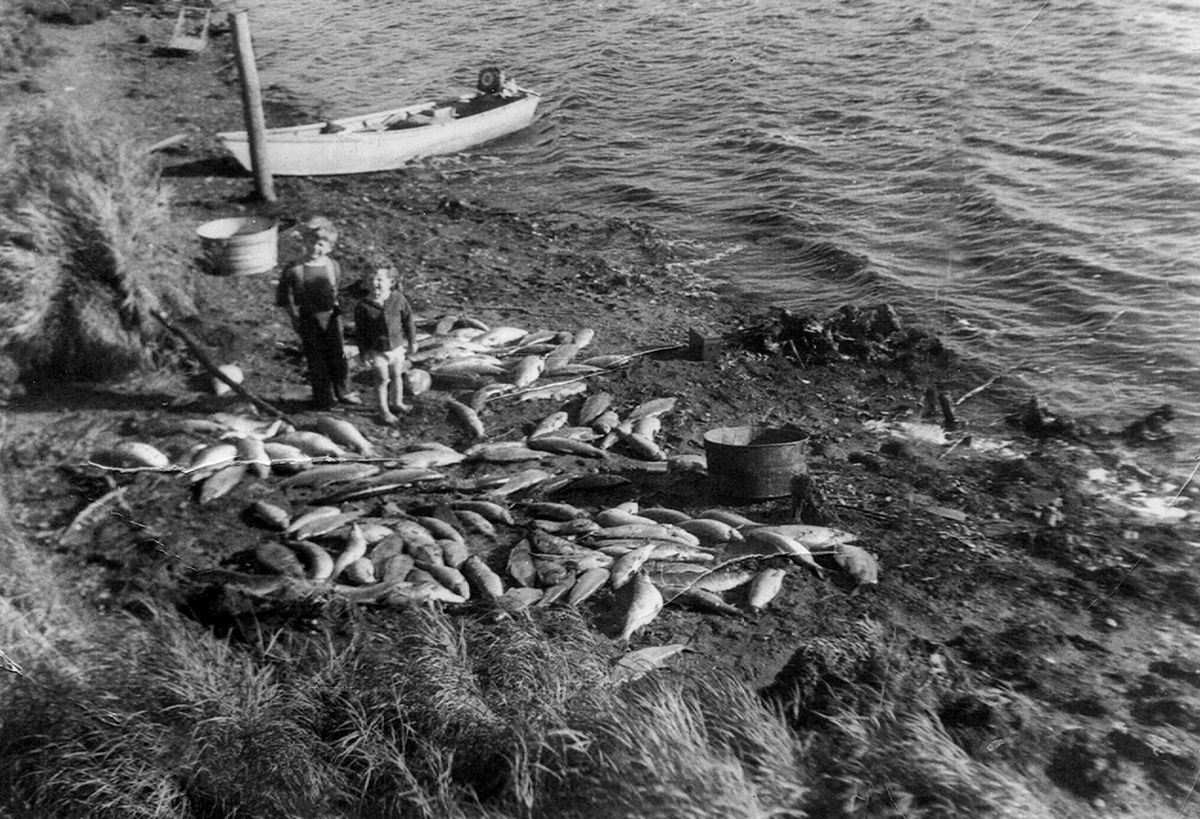 Michael Carey and his sister, Kathleen, on the beach at Lake Minchumina about 1950. The white fish will soon become dog food. (Photo courtesy Michael Carey)

Michael Carey and his sister, Kathleen, on the beach at Lake Minchumina about 1950. The white fish will soon become dog food. (Photo courtesy Michael Carey)

How many times have I flown from Fairbanks to Lake Minchumina, 150 miles southeast of the Golden Heart City? I'll never know.

My first flight occurred 70 years ago. Many flights followed, some commercial, some with my Dad in his Super Cub. Fabian noted the dates in his log book, usually adding "w/Michael to MHM."

My latest flight to Minchumina took place two weeks ago. It may be my last.

Belted in next to Wright Air pilot Mick Van Hatten on a clear May afternoon, I looked down from several thousand feet at a landscape that, after Nenana, had changed little since my Dad began his trapping career in 1937 as a 20-year-old kid. Oh sure, the rivers had cut new channels, fires had destroyed thousands of acres of timber and brush, but this area remains true wilderness, roadless with minimal human impact. I had no trouble activating the map in my head although I had not flown this route in almost 20 years. I watched for rivers, the Tanana, Nenana, Toklat, Bearpaw, Kantishna, Muddy. The rivers not only tell you where you are, they tell you how many minutes you are from touchdown at the Minchumina air field.

[The garage in Graehl was a trove of treasure]

My Dad invoked the rivers in everyday conversation that either I was part of or overheard. His comments, occasionally delivered to me above the roar of his Super Cub engine, allowed me to recognize the rivers from the air and internalize their lore.

Lore? In the years before airplane travel became common, trapper Clarence Boatman, Fabian's friend and mentor, poled a boat upriver from the confluence of the Tanana and Kantishna to Lake Minchumina. This took weeks, not days. Boatman made the voyage to reach the productive marten-trapping ground in the shadow of Mount Denali. I knew Boatman as a failing old man who had come to Fairbanks to live out his last days, but in his prime the man with a pole must have had the body of a NFL linebacker and the stamina of a marathoner. Boatman was born in 1866. It continues to astonish me that he could remember when news of the Custer massacre reached his small Midwestern town in the summer of 1876. The impressionable boy vowed to join the cavalry, and when he became of age, he did.

Comfort in the names

Saying the rivers' names to myself, Tanana, Nenana, Toklat, Bearpaw, Kantishna, Muddy, comforted me in the opening stages of a trip I knew would be difficult. My sister, Kathleen, died last year, and now I am the only surviving member of the family of four who lived at Minchumina, where Fabian trapped, in the late 1940s and into 1950.

The smooth flight took a bit more than an hour, and as Mick prepared for landing, I recognized the familiar contours of the sprawling lake, one of the largest in the Interior, with open water in places but many miles still covered by ice. The airstrip, constructed along the edge of the lake by government contractors on the cusp of WWII, is almost a mile long. The Roosevelt administration understood the importance of air power and built fields all over Alaska.

My bags put away at a friend's cabin, I walked to the old Carey place 20 minutes away. In my childhood, my family made the trip by boat, powered by an outboard, in summer and by dog team in winter. Either way, the lake provided the "trail."

The three-room cabin sits on a knoll overlooking the lake. The view would be pleasing if so many birch trees and cottonwood had not grown up in my absence. The view today can be described as leafy. Photographs of the cabin from 1950 and before are treeless. The old-timers feared fire and cleared the foliage within 90 feet of their home.

When I was a boy, Denali and the Alaska Range were clearly visible to the east from our yard.

[A look back, all the way to the trap line]

The names of Minchumina old-timers rolled through my head as I approached the cabin, as had names of the rivers during the flight. Jim Sillib, Herman Olson, Kenny Granroth in particular. The cabin has three rooms. The back room Sillib built circa WWI as his cabin. The middle room Olson and Granroth attached circa WWII. The third room, connected at a 90 degree angle to the second, my Dad built. By now Fabian is an old-timer too. I suppose I am as well although I have none of these men's skill with the most important wilderness tool in their day, the ax.

One of my favorite stories about my Dad involves an ax. One afternoon in the fall of 1937, Fabian's experienced trapping partner, Carl Hult, watched my Dad cut firewood and peel logs. As dinnertime approached, Carl asked gruffly "Where did you learn to use an ax?"

Fabian answered the senior woodsman, "In Minnesota. Am I doing something wrong?"

That provoked Carl to bark, "That's what's wrong. There is nothing wrong. I never saw a kid who could handle an ax like you."

Jim Sillib, and perhaps a partner, tried fox farming on the nearly five-acre lot. The pens collapsed decades ago, but in places, wire pushes through leaves and woodland debris. The wire illustrates the truth of the Irish proverb: "Tis a small thing doesn't last longer than a man."

Sillib was part of the gold rush generation. He was from Ontario and came to Alaska through Vancouver, B.C. Years ago, I found several letters Jim's sister wrote from Ontario, sometime in the 1940s. They are the voice of gold-rush sadness — blood relatives separated so long they wouldn't recognize one another on the street. In one letter, the sister describes what she looks like and gives her weight in stones, not pounds, a British form of measurement. As an old man, Sillib found it hard to recognize anyone. He went blind.

Olson was a veteran trapper who took Granroth as a young partner when Kenny came to Minchumina as a laborer building the airfield. Both were Finns and talked Finnish in the woods, Kenny said. They were marten trapping miles from Minchumina when the Japanese bombed Pearl Harbor in December 1941. They had no radio. And did not learn the United States had entered WWII until March 1942. They must have been among the last residents of North America to get the word.

Olson died in 1943, leaving Kenny on his own. Sometime in the 1930s, Olson built a small cabin down the hill from the main cabin. Or he may have moved the cabin there from another lot on the lake. I have heard both stories. In any case, Fabian used the cabin as a shop and for storage.

Strike a match and remember

I had trouble getting into the three-room cabin up the hill. The door wouldn't open. The rooms were settling, separating by inches and the floor had lifted. Minchumina neighbors with more skill than I — and the right tools — figured out how to open the door, and I soon found myself sitting at the kitchen table, the door ajar, listening to the breeze rustle the leaves. The bugs were not bad, but I lit Buhach, the packaged Chrysanthemum flower compound that drives off bugs. As I put a match to the mustard-colored powder spread on a pie plate, I was conscious that this was like lighting incense for a ceremony. A ceremony of what? Remembrance? Farewell?

Remembrance certainly. My first childhood memories are of Minchumina — a powerful, windy rainstorm bending the trees, lashing the cabin. And what my parents remembered and recorded has become part of my memory. In a letter my mother never mailed, which I found at Minchumina, Mary Carey told her sister in the Bronx, "Michael enjoys his freedom." But, she continued,  "The first night at bed time he said 'Let's go home. This is no house.' At times he looks around and says 'What is this? This is no house.' " My mother added "He of the mansion refuses to accept a log cabin as home."

Farewell almost certainly. The people who made the cabin vital to me are gone. I won't end my life as a museum curator, and sadly, the place has become a museum badly in need of restoration, although in summer it would be dry enough, sound enough, to spend a few nights as long as you could put up with the bugs that came in through the gaps between the rooms.

At Minchumina, my parents received The New Yorker magazine by mail. I am not sure if they had a subscription or a stateside relative mailed copies. I found one from the late '40s while checking on the cabin Herman Olson built or moved to the property. The cover was gone. I am unsure of the date.

The magazine is familiar given its advertisement of luxury goods, profiles, reviews, criticism and cartoons. I was surprised by a piece that ran much of six pages. "On and Off the Avenue," reviews fur fashion. The coats, capes, accessories and hats offered by the high-end designers like Herme and Alfred Rainer. How Fabian must have marveled at the prices the rich were willing to pay for quality fur. "At last," he may have told himself, "the big year is here, and I'm going to make big money in the woods." But trappers then and now know: The big year is soon over, and the big money eaten up by routine expenses and the surprise medical bill.

Less than three years after The New Yorker arrived, Fabian and Mary Carey were off to Fairbanks to start an urban life and send their children to school. The Minchumina cabin, which they were unwilling to sell, became part of the story of their lives. My sister's too. And all these years later, remains part of mine.