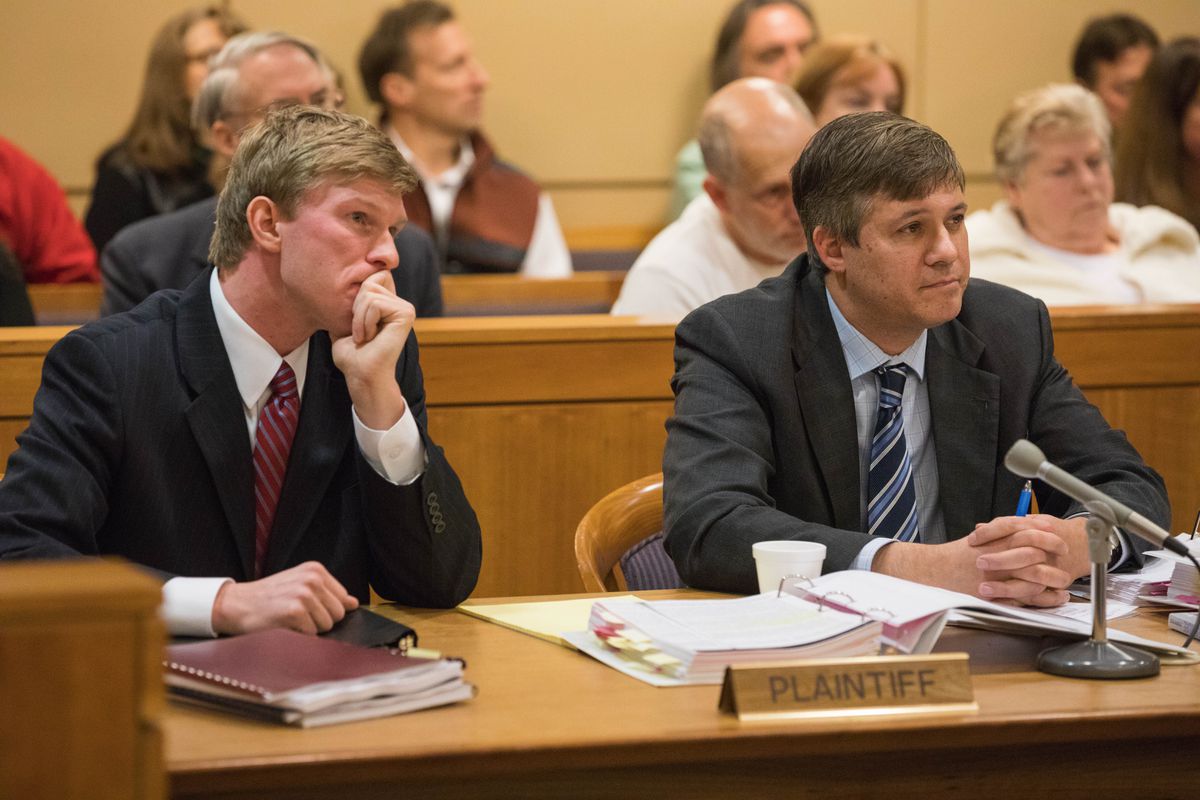 Plaintiff Sen. Bill Wielechowski, right, and attorney Andrew Erickson listen as Judge William Morse rules against them in a lawsuit challenging Gov. Bill Walker’s veto of half the Alaska Legislature’s deposit into the Alaska Permanent Fund’s dividend account, at the Nesbett Courthouse on Thursday, Nov. 17, 2016. Wielechowski has appealed the decision to the Alaska Supreme Court. (Loren Holmes / Alaska Dispatch News)

Plaintiff Sen. Bill Wielechowski, right, and attorney Andrew Erickson listen as Judge William Morse rules against them in a lawsuit challenging Gov. Bill Walker’s veto of half the Alaska Legislature’s deposit into the Alaska Permanent Fund’s dividend account, at the Nesbett Courthouse on Thursday, Nov. 17, 2016. Wielechowski has appealed the decision to the Alaska Supreme Court. (Loren Holmes / Alaska Dispatch News)

Gov. Jay Hammond, Permanent Fund founder, knew this time would come – the time when politicians would move to spend the Permanent Fund dividend (PFD) without public consent. Hammond believed in the PFD as Alaskans' right to share equally in the resource wealth saved in the Alaska Permanent Fund and as a way to protect the fund. Ever since the start of the PFD in 1983, the dividend has been the politicians' target for spending. Today, politicians are working to grab a large percentage of the people's PFD. That is exactly what Hammond and other Alaskans warned against and opposed during past failed attempts.

Voters approved the Alaska Permanent Fund by constitutional amendment in 1976 based on the foresighted proposal of leaders to save a portion of the oil revenues instead of blowing every dollar on government programs and needless projects. Together we saved a portion of the vast wealth generated by a nonrenewable oil bonanza owned in common by the people for our future and for future generations.

The leaders who created the fund wisely knew that protecting the Permanent Fund and stopping the political caste from looting the fund was going to be difficult. That's why they advanced the idea of creating the PFD. Establishment of the PFD was designed so that every Alaskan shares equally in the proceeds of the Permanent Fund. Hammond believed the PFD would insulate the Permanent Fund from plunder by future politicians.

Deceptive statements by some government and business leaders are confusing many Alaskans. They claim we need to hand over a large portion of our PFD to fill the gap from declining oil revenue or else Alaska will face financial catastrophe.

I'm not buying this PFD grab and neither are many other savvy Alaskans. My Democrat friends tell me we have a revenue problem. My Republican friends insist our state has a spending problem. But these beliefs miss the main point. Alaska has a serious leadership problem after years of unsustainable budgets. This is a cash flow management problem, not a full-blown fiscal crisis. What we have is a self-inflicted political crisis that select members of the political establishment are using to reduce your share of the PFD.

This "owner state" we call home has ample sources of other income as well as areas where we can make additional targeted cuts. We have the means to pass a balanced and sustainable budget without slashing every Alaskan's PFD. What's missing now from our elected officials is the will to adopt reasonable measures that achieve this. Fights about taxes, cuts and oil credits produced political gridlock that has led to a raid on PFD money as a convenient way to balance the budget.

Gov. Jay Hammond wouldn't have put up with this grab of your funds. Nor would my father, the late Gov. Wally Hickel. And neither should we.

So how, exactly, did your PFD get chopped over $1,000 last year, with another big reduction scheduled for this year?

Current law directs the trustees of the Permanent Fund Corp. to transfer fund revenue into the Earnings Reserve Account for PFD distribution. These funds are never placed in the general fund for government spending according to this law. The entire PFD process is automatically governed by statute; no further appropriation or action is required by the Legislature or the governor to make the full payment to every Alaskan.

The basic problem is that the Alaska Legislature, the governor and the Permanent Fund Corp. all failed to follow the law for the PFD distribution process. The Legislature needlessly added language related to transfer of PFD funds into an appropriation bill. The Permanent Fund Corp. didn't promptly transfer the necessary funds for disbursement of the PFD as required by law. Then the current governor incorrectly vetoed the existing PFD transfer that has worked legally for the past 37 years.

Not surprisingly, the governor's actions were challenged in court. At the core of the PFD dispute is the law that requires payment of an equal dividend to every eligible Alaskan.

I believe in holding our public officials accountable. I believe every Alaskan eligible for a PFD should receive the full measure of their dividend according to the law. Any change in the PFD law should take place in an open and transparent way through the Legislature, not some sleight-of-hand process by an illegal veto.

At stake is more than the amount of the PFD. Are we a state that adheres to the rule of law?  Or are we going to succumb to convenient measures enacted by shortsighted politicians without regard to our actual financial circumstances or the needs and rights of every Alaskan?

For my part, I'm contacting my political representatives to tell them to follow the PFD distribution law. And I am encouraging all Alaskans to do the same. I expect a full PFD as the proper share of the wealth generated by our Permanent Fund for every Alaskan, including my grandchildren. So should you.

Dr. Jack Hickel is a family medicine physician at Southcentral Foundation in Anchorage and a leader of Permanent Fund Defenders.