A Haines couple owes $52,000 after trying to block people driving on their land 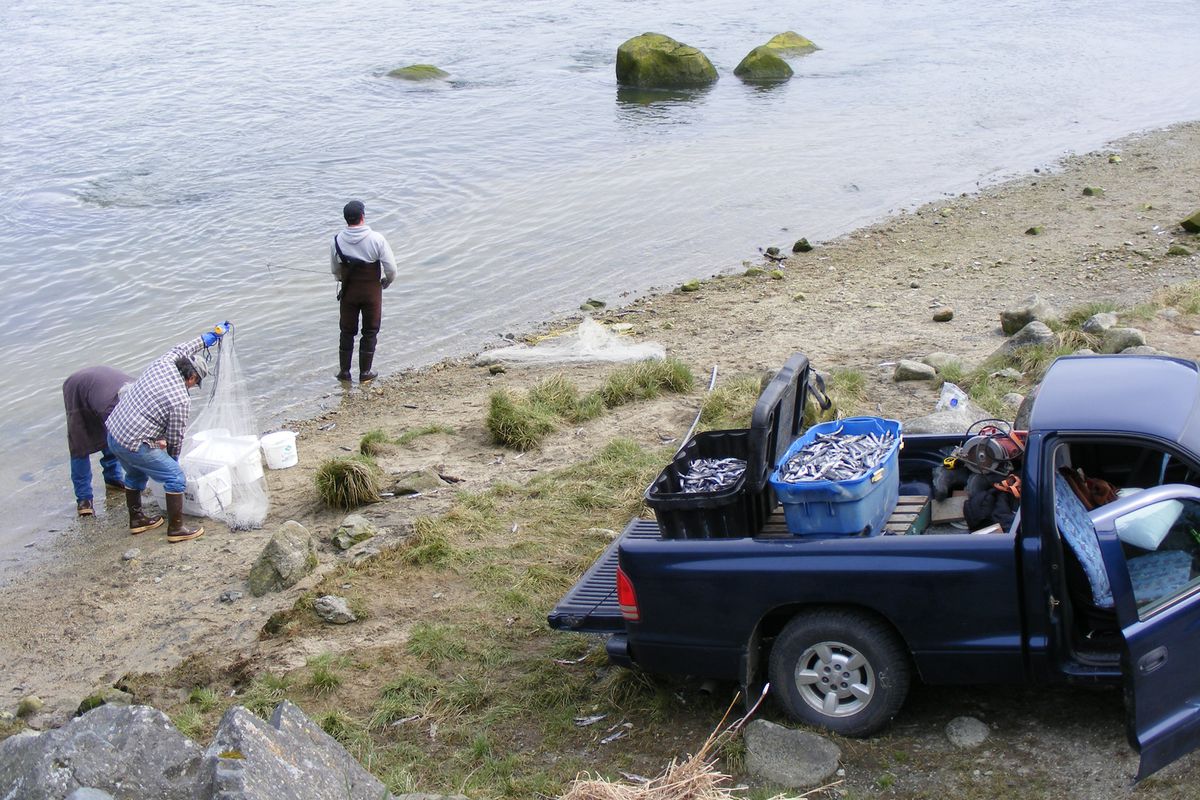 Tlingit fishermen use pickups to haul hooligan from the Chilkoot River near Haines on an access route that was the subject of a legal battle with Rueben and Rosalie Loewens, who claimed ownership of the land. The photograph became an exhibit in the case, submitted by attorneys for Native groups fighting to keep the route open. (Kristen Miller)

Tlingit fishermen use pickups to haul hooligan from the Chilkoot River near Haines on an access route that was the subject of a legal battle with Rueben and Rosalie Loewens, who claimed ownership of the land. The photograph became an exhibit in the case, submitted by attorneys for Native groups fighting to keep the route open. (Kristen Miller)

Rosalie and Reuben Loewen tried to limit people driving across their land to fish in the Chilkoot River near Haines. Now they must pay $52,000 in legal fees to the Juneau-based Native corporation that intervened in the case.

The Loewens are waiting for word from their bank about a home equity loan to pay the fees. They already spent $60,000 over several years on a case they thought would be a routine real estate action to clarify property lines.

The legal system seems to have worked as it often does, creating an expensive multiyear battle of an issue that reasonably could have been resolved over a few cups of coffee. The outcome about access to the river is not very different from what both sides say they originally wanted.

But because of the unique way Alaska law handles attorney fees, the family now owes money it doesn't have to a company it never sued — Sealaska Corp.

Sealaska's attorney asked a judge to award $241,000 in attorney fees and expenses, saying the Loewens had tried to violate Natives' constitutional rights to subsistence. But a judge cut the amount, saying the case was merely a real estate dispute and that Sealaska spent much more than it needed to.

"Our marching orders were to win no matter what it took, and that's what we did," said Sealaska's Juneau attorney, Kristen Miller. "I think the message that the attorney fee award sends is that owning property doesn't give you the right to trample on the rights of others."

But the Loewens' attorney, Dan Bruce of Juneau, said Sealaska's demand for fees was punitive and would intimidate others.

"You have a corporation with substantial resources litigating with a couple who own a tract of land and a home in Haines," he said. "It's David and Goliath, except in this case Goliath won the battle, and then seeks to assess some pretty substantial fees and costs."

After talking to the family, a Native leader in Haines, other locals and lawyers on both sides, I think the judge made the right decision in allowing drivers to run pickups to the river to haul out their hooligan in the springtime fishery.

Subsistence fishing for the little smelt has gone on forever. Tlingit families began driving the 150-foot path when a state bridge contractor cleared it in 1979. The law says if people cross your land without permission for 10 years, that can create an easement.

But the attorney fees are unjust—legal, but unjust. Alaska should change the unique rule that allows winners to extract fees from losers.

Land at the mouth of the Chilkoot River originally entered private hands in 1960 as a Native allotment, as the federal government would transfer title to a traditional user. That owner sold the land and, in 1981, Reuben Loewen's parents and another couple bought lots from the larger parcel.

Reuben, who grew up in Kotzebue and worked as an engineer installing rural power systems, began building his family's house in 2011. He and Rosalie didn't like trucks driving across land they perceived as theirs and potentially damaging the riverbank and causing contamination.

Reuben said he put up a sign that said: "Private Property. People welcome. No vehicles except for elderly and disabled."

"If people would say we don't want to walk our fish out, we want to drive across your yard, you would say that's ridiculous," Rosalie Loewen said. "Buy the land if you want to control it."

But Lee Heinmiller, executive secretary of the Alaska Native Brotherhood in Haines, said the Loewens tried to stop a tradition.

"You're basically harvesting truckloads of fish, and the elders would sit down there with the pickups," he said. "From the time those elders were kids, that's pretty much what they did."

The Loewens originally went to court to define the high-tide line where their property ran and to quiet the title, which would have given them control. Later, they put a boulder in the route the fishermen were using.

Haines Native organizations intervened in the title action to oppose the family blocking their access. When the locals ran short of money, Sealaska got involved.

As legal fees grew, the Loewens tried to get out of the case, dropping their claim to the parcel with the access route. But Sealaska had claimed access to another parcel (an issue the family ultimately won).

Miller said the Loewens would not agree to restore unrestricted access. The Loewens said the Natives were unreasonable.

"It was a lot of talking past each other," Reuben Loewens said. "There were lectures about smallpox. There were bigger issues for some of these people."

"People have been fishing that spot literally for thousands of years," he said. "They were going to get to make all the decisions on that property."

But the judge's decision opens access for everyone, not just Natives.

For a century, Alaska Natives fought for their land rights as underdogs, but now the Native corporations are Alaska's biggest companies. They're not the underdogs anymore.

Sealaska's pursuit of legal fees against this family looks like a warning to others not to resist its will.

In other states, litigants are generally responsible for their own legal fees. In Alaska, the winner can use them to increase harm on the loser.

The idea behind the system is to discourage frivolous litigation and push litigants to settle cases. But research by the Alaska Judicial Council has shown it doesn't deter many frivolous claims.

What it does do is skew the balance of power to large corporations against the middle class.

For rich and corporate litigants, court costs come with the territory. The poor don't have to worry—they have nothing to lose.

But if you own a house and work a job, like the Loewen family, Alaska's system tells you to let big companies do whatever they want. The risk of using the courts is too great.