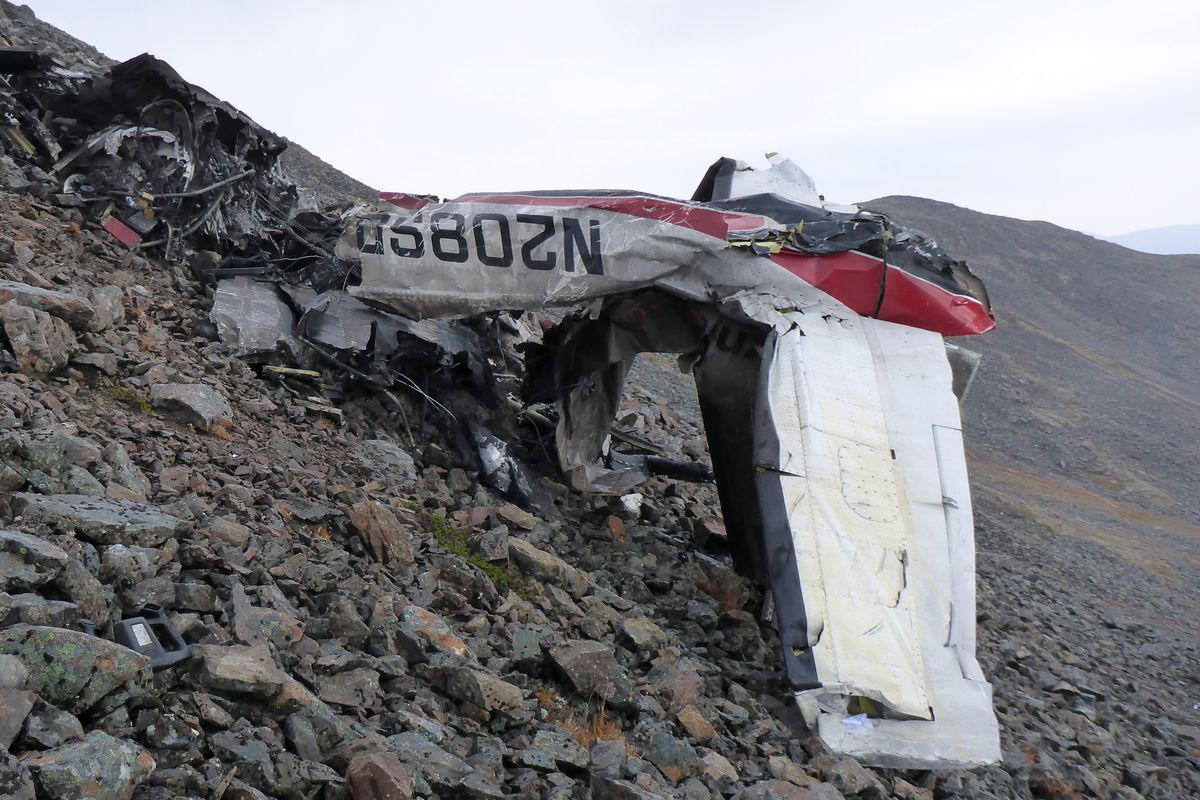 The wreckage of the October 2016 crash near Togiak. (Alaska State Troopers photo)

The wreckage of the October 2016 crash near Togiak. (Alaska State Troopers photo)

On Aug. 27, 2016, a student pilot departed Fairbanks in a Piper Super Cub and 30 minutes later crashed into mountainous terrain 9 miles southwest of Salcha. The pilot, who was the sole occupant, was seriously injured.

Six weeks later, on Oct. 12, 2016, a Cessna Caravan operated by Hageland Aviation (a member of the Ravn Air Group) departed Quinhagak on scheduled flight 3153 and crashed into mountainous terrain about 12 miles northwest of Togiak. All three people onboard were killed.

The two crashes had one obvious thing in common: Both involve one of the most common causes of accidents in Alaska, "controlled flight into terrain."

In its announcement, the National Transportation Safety Board noted the larger issues of CFIT as well as flight into instrument meteorological conditions, which affect the Alaska aviation community.

It also noted 36 accidents involving CFIT in the state between between 2008 and 2016, 17 of which involved Federal Aviation Regulations "Part 91" general aviation pilots. Another 19 accidents involved the regulations' "Part 135" air taxi and small commuter operators.

These crashes occurred in dramatically different regions and involved a wide range of piloting experience, aircraft and injury severity.

It is also worth noting that 12 of the 19 accidents with air taxi and commuter operators involved Medallion Foundation carriers.

Medallion was formed in 2001 by the Alaska Air Carriers Association to improve safety awareness and reduce air carrier insurance rates. To date, the organization has received at least $18 million from state and federal agencies as well as outsized levels of public support.

In 2004, Sen. Ted Stevens was quoted in a Medallion ad stating, "If they're not in the Medallion program, then don't get on the aircraft."

This endorsement was echoed by former Gov. Sean Parnell in a 2013 speech before the Chamber of Commerce: "Medallion certification diminishes the number of lost lives and injuries due to aviation accidents, so if you are traveling on a Medallion-certified air carrier, you are traveling with people who have been trained above and beyond the minimum."

In March 2016 the Alaska Travel Industry Association got on the bandwagon in a letter to the NTSB regarding the documentary program "Alaska Aircrash Investigations."

The association, in stressing its focus on portraying positive images of the state's aviation industry, noted that it worked with both the AACA and Medallion to "employ best practices, including safety measures, in order to employ a quality experience for our visitors."

At that point, there had been 17 CFIT fatalities and 16 serious injuries since 2008 on Medallion carriers. The Togiak accident would add three more deaths to the tally.

There are nine separate Medallion carriers among the 36 on the NTSB's CFIT list, including Hageland Aviation. In fact, Hageland was involved in 12 total accidents between 2008 and 2016, from various causes, resulting in 14 fatalities and 21 injuries.

But in late 2015 the carrier still received the Medallion Foundation's fifth Cornerstone Star, making it eligible for Shield status, the highest degree of Medallion membership, which it later obtained.

And Medallion's influence with the Federal Aviation Administration was clear in March 2016, when Alaska Flight Standards Division Manager Clint Wease sent a letter to all air taxi and commuter carriers in the state encouraging them to seek assistance from Medallion in reducing CFIT accidents.

Wease did not mention that in the previous year Medallion carriers Promech Air, Wings of Alaska and Wright Air Service had all been involved in CFIT crashes. A few  months after the letter was sent, Hageland flight 3153 crashed in Togiak.

Thirteen people died and nine were seriously injured in those four accidents with companies that supposedly exemplified some of the best the state had to offer in aviation safety.

The many things that went wrong in Togiak last October and in the nearly three dozen other CFIT-involved accidents between 2008 and 2016 is proof that Alaska pilots continue to  struggle with issues affecting their situational awareness and decision-making.

For air taxi and commuter pilots in particular, it is clear the state has a training problem, and hard choices need to be made about what is working in that area, and what it is not.

It is reasonable for air taxi and commuter pilots to expect they will receive training that raises their standards of proficiency and professionalism, not lowers them to the dangerous depths populated by unsafe corporate cultures and well-funded, but ineffective, training.

The answers found by the NTSB in the Togiak tragedy will likely apply to far more than just Hageland Aviation; they just might explain what has been going wrong in a lot of other companies, cockpits and training programs as well.

Colleen Mondor is the author of "The Map of My Dead Pilots: The Dangerous Game of Flying in Alaska." The NTSB investigative hearing begins at 8 a.m. Thursday in the middeck ballroom at Hotel Captain Cook.