Fairbanks recalls the great flood that changed everything 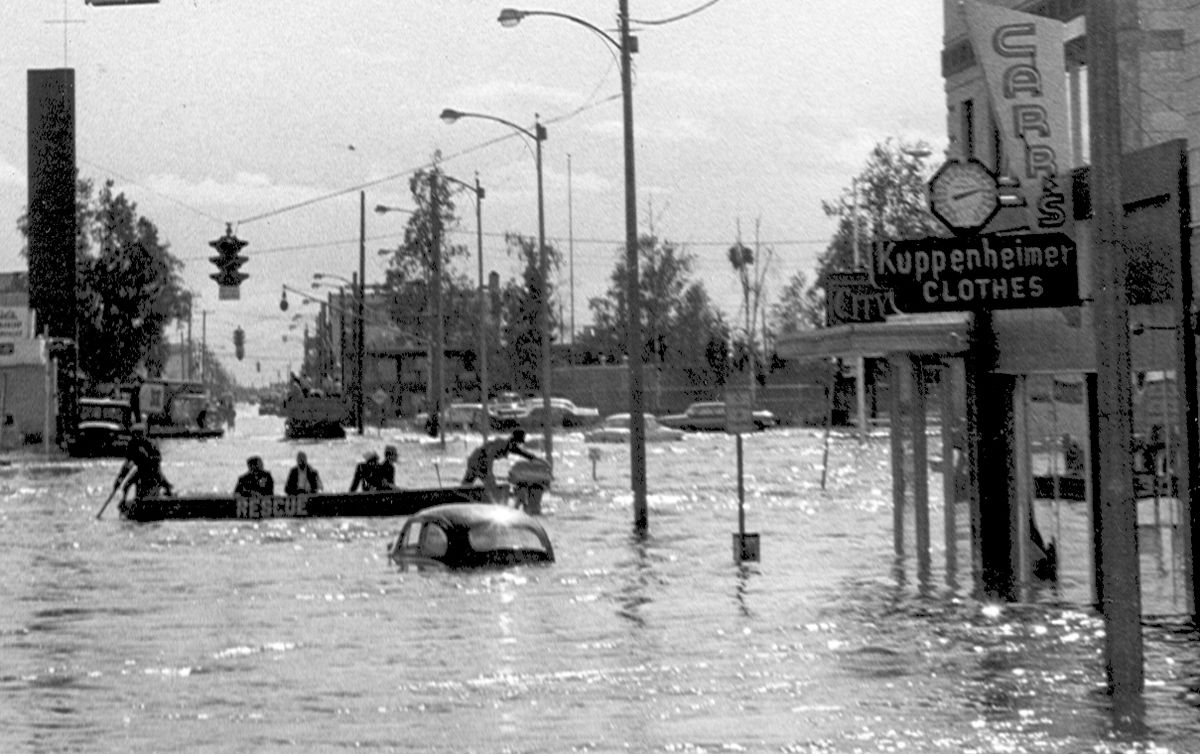 Cushman Street turned into a waterway during the 1967 flood, with people traveling by canoe and motorboat in waters 3 or 4 feet deep. (Fairbanks Daily News-Miner Collection)

Cushman Street turned into a waterway during the 1967 flood, with people traveling by canoe and motorboat in waters 3 or 4 feet deep. (Fairbanks Daily News-Miner Collection)

FAIRBANKS — The mayor, a former chief petty officer in the Navy, had a ready wisecrack about the lack of looting in the city center during the 1967 Fairbanks flood.

Mayor Henry Aristide Boucher, who preferred to be addressed as "Red," claimed he had gone downtown in a boat and recruited residents who remained behind in the Northward Building and the Polaris Building, the two tallest buildings in the city, to keep watch.

"Just go get your thirty-aught-six with a scope out and lean over the side of the building," said Boucher, 46 at the time.

"I guess any freeloaders would figure that was kind of an unhealthy place to be,"  said Boucher, giving an update to an Anchorage TV reporter a few days after the flood peaked.

The truth was that Fairbanks, with a city population of about 18,000 at that time, and maybe twice that in the surrounding area, had far bigger problems than petty criminals 50 years ago this week.

The flow in the Chena River, usually a placid tributary of the Tanana River, soared over its banks, carrying about 37 times more water than usual.

Nearly every house on the floodplain was damaged and when the water receded, there was an inch or more of brown mud on every horizontal surface. The USGS estimated damages at $85 million, more than $700 million in today's dollars.

At a time when water was still flowing on the streets of Fairbanks, Boucher, the future lieutenant governor, state legislator and Anchorage Assembly member, repeated what had become the universal flood refrain — we may have some problems, but others have it worse, so let's pull together.

Many years later, Boucher would say the flood disaster stood out as "the most significant five days in my life, in either combat or public service."

Most city residents had to move to higher ground to escape the muddy lake that covered Fairbanks. Sam White, the legendary bush pilot and game warden, put a sign on his Kellum Street front door: "Through this house runs the deepest river in the world."

The cold waters first filled every basement and kept climbing. Couches and chairs floated off and hundreds of nearly empty buried fuel tanks popped out of the ground from the water pressure.

About 4,000 people stayed with friends in the hills outside of town, about 3,500 moved at one point to Lathrop High School, dubbed the "Lathrop Hilton," and from 7,000 to 8,000 people sought refuge on the hillside campus of the University of Alaska.

To mark the 50th anniversary of the worst flood in its history, Fairbanks has installed nearly two dozen markers in the city to show how high the water climbed in 1967. A ceremony marking the occasion, with flood stories and plaques about the flood, was scheduled for Tuesday.

In one sense, a flood like that of 1967 was not a big surprise, except for the timing. Fairbanks is built on a floodplain and it has suffered at least 15 serious floods over the years, most of them at spring breakup.

In 1967, the remnants of a tropical storm named Hope reached Interior Alaska and a series of storms dumped roughly 10 inches of rain on the upper Chatanika basin, close to the annual average precipitation. Veteran Fairbanks meteorologist Rick Thoman has offered what he says is a "geeky analysis," that there is a 13 percent chance over the next 30 years of seeing 3.44 inches of rain in one day at the Fairbanks airport.

In 1967, the lack of immediate warning about the river level complicated evacuation efforts. There was no useful information from upstream river gauges to foretell what would happen in Fairbanks when the river flooded. From Aug. 8-15, the Chena River climbed more than 15 feet.

"We knew it was rising quickly but we had no way of telling how high it would crest without data from upstream," Jim Meckel of the USGS said in 1967.

A few things of lasting significance grew  out of the flood disaster, long after people had shoveled the last of the silt.

First, there was a successful campaign to build what is now Fairbanks Memorial Hospital, owned by the community. It was an impressive display of how people could put their differences aside in pursuit of a common goal.

Second, Congress approved spending hundreds of millions on a flood control project to protect the community from future disasters. Upstream monitors eliminated the need for guesswork about river levels miles from the city.

It is not a guarantee against all floods, but the Chena Lakes Flood Control project remains the most important public works project in the history of Interior Alaska. It has taken some of the fear out of living on a floodplain.

The project includes a 22-mile levy along the Tanana River and a dam 17 miles from Fairbanks that reduces the flow of the Chena when necessary.

On about 20 occasions since 1980, the steel gates have been lowered to hold back some of the Chena's flow, preventing anything close to a repetition of the events of August 1967.