Early development care for kids pays off for families and country 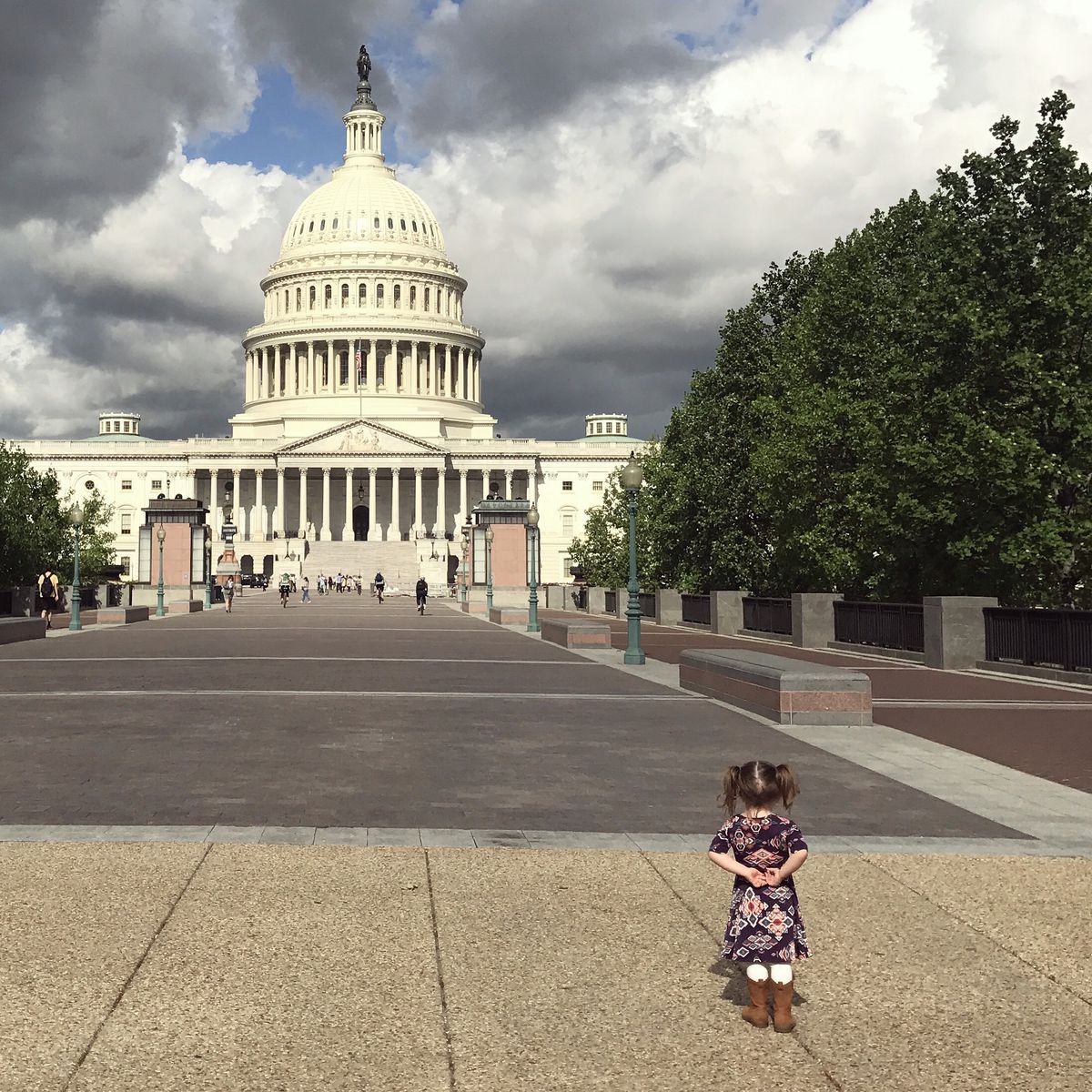 Lake Harvey, 2, stands before the U.S. Capitol in Washintgon, D.C., where she and her family participated in Strolling Thunder in May. (Photo courtesy Mackenzie Harvey)

Lake Harvey, 2, stands before the U.S. Capitol in Washintgon, D.C., where she and her family participated in Strolling Thunder in May. (Photo courtesy Mackenzie Harvey)

Being a mother in Alaska is amazing. My greatest joy is sharing my love for the great outdoors with my two young daughters, Lupine and Lake. I love watching them grow into curious and confident learners. I love listening to their stories and songs and jokes. I don't take it lightly that we are laying the groundwork for all of their future relationships. The truth is, so much of this family foundation comes down to communication – something that I never take for granted, as both of my children struggled with language delays as babies and toddlers.

Our family of four lives in Eagle River. I am a full-time mom and part-time graduate student. My husband, Jerrod, is a store manager with Home Depot. When our first daughter was born, she was perfect in every way. My husband and I looked forward to the joys and struggles of parenting, and felt prepared for the future. But around her first birthday, we started to notice that Lupine didn't speak as much as other kids her age. While concerned, we simply didn't know the extent of resources available to us. It wasn't until she was 2 ½ – and had fallen even further behind – that we asked for a referral to an Infant Learning Program (ILP).

By the time that we had connected with this resource, Lupine was nearly 3 years old and no longer eligible for services. We were fortunate to have been referred by our ILP to an Anchorage School District preschool program specifically for kids with expressive speech delays. Thanks to this preschool program and private (costly) speech therapy, Lupine just started kindergarten with no measurable delay. This is a prospect that felt out of reach two years ago.

When Lake was born, we fell in love once again, but this time we were better prepared. Around her first birthday we began to recognize the same challenges in her language development. Now equipped with knowledge of the resources available to us, we were much more proactive, and much earlier. This made it possible for us to take advantage of weekly speech therapy at no cost through our ILP – a huge savings that we were unable to benefit from with Lupine. Lake developed a warm, trusting relationship with her speech pathologist and her articulation improved tremendously over just a few short months. She is now being served by ASD, in the same Communication Classroom that Lupine just exited. We are confident that by the time she begins kindergarten, she will require no additional speech therapy and this is thanks entirely to early intervention.

We now know that the timing for programs like the Infant Learning Program  is critical. We represented Alaska at Strolling Thunder in Washington, D.C., this spring – a day when parents from every state traveled to the Capitol with their babies and toddlers. We were able to speak personally with our members of Congress about the difference that early intervention made for our family.

Thanks to the national nonprofit ZERO TO THREE, we learned that a baby's brain produces 1 million new neural connections every second, a never-to-be-repeated rate. These connections set the stage for all later learning, thinking, speaking and reasoning. All babies and toddlers need positive early learning experiences to foster their intellectual, social and emotional development and lay the foundation for their later school success. The bottom line is that when young children experience challenges, the earlier the intervention, the more powerful it is. We are living proof.

However, despite verbal support for early interventions, Congress is not prioritizing programs that make a difference for vulnerable families. For example, early intervention for infants and toddlers actually receives 18 percent less in real dollars than in 2005. Early Head Start reaches fewer than 6 percent of eligible children. Additionally, they are looking to cut other programs that serve those who need support the most, like Medicaid.

We are thankful that some members, including Alaska's Sen. Lisa Murkowski, recognize that this approach is short-sighted. By investing in the healthy development of young kids through these programs, Congress staves off bigger costs down the road, such as those that our school system would have absorbed if our girls' developmental delays hadn't been caught early. Disparities in children's cognitive and social abilities become evident well before they even enter pre-K, often by their second birthday. So why aren't we acting as early as possible, when we have the best chance to make an impact for children like Lupine and Lake?

Without ILP, our family would not be able to afford the expensive speech services that have given our children the tools they need to succeed, at the time when they were most effective. As we watch them both excel and overcome their delays, we know that they will be ready to meet the important challenges in their primary school years and beyond. If Congress is serious about moving the needle dramatically for families and their very young children, they need to expand their support for these proven early development programs. The next generation of innovators, parents and leaders are counting on it – here in Alaska and throughout our country.