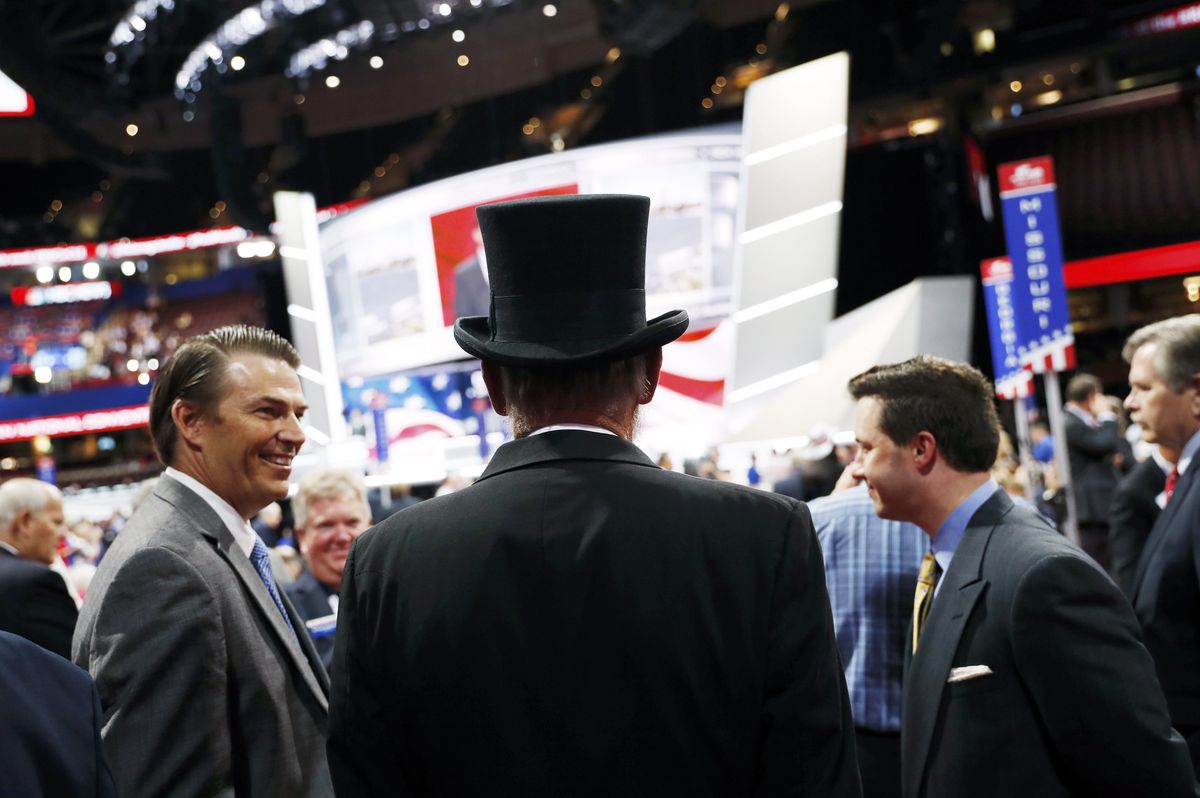 A man dressed as President Abraham Lincoln, complete with Lincoln’s stovepipe hat, looks out at the floor of the Republican National Convention in Cleveland, Ohio, July 18, 2016. (REUTERS / Mark Kauzlarich)

A man dressed as President Abraham Lincoln, complete with Lincoln’s stovepipe hat, looks out at the floor of the Republican National Convention in Cleveland, Ohio, July 18, 2016. (REUTERS / Mark Kauzlarich)

WASHINGTON — In his prescient science fiction novel "The Diamond Age," Neal Stephenson describes a post-national world in which people organize themselves into affinity groups called "phyles." Some choose to be Victorians, emulating the beliefs and aesthetic of 19th century Britain. Others identify with the values and dress of the Boers. The Celestial Kingdom is a Chinese culture phyle. In "The Diamond Age," globalization has erased the nation-state and left people — always hungry for belonging — to identify themselves entirely by culture.

A provocative new essay by Andrew Sullivan, "America Wasn't Built for Humans," describes the emergence of two American phyles. One is more racially diverse, urban, secular and globalist. The other is largely white, rural and exurban, religious and nationalist. Their conflict is the context of American politics. At stake is the idea that "American" describes a single people.

[Christine Flowers: Neither bigotry nor tribalism fit the American ideal]

In Sullivan's description, the "myths" that used to help unify the country — the ideal of assimilation, the idea of America's founders as exemplars of constitutional values — have been weakened.

"We dismantled many of our myths," he argues, "but have not yet formed new ones to replace them." The result is the dangerous triumph of cultural identification over unifying political ideals.

Who is at fault for the depth of this mental divide? It is the nature of political polarization that both American tribes blame each other. Sullivan blames them both, but not quite equally.

According to Sullivan, members of the blue tribe have created problems in the realm of ideology. Some have promiscuously accused the red phyle of hate speech and white supremacy, rendering the terms less powerful when required to describe the real thing. Marxist ideologies on race and gender have "become the premises of higher education, the orthodoxy of a new and mandatory religion," says Sullivan. (The essay may generate some controversy for Sullivan's forthright criticism of the recent direction being taken by Ta-Nehisi Coates on racial issues.)

But it is the red tribe, in Sullivan's view, that has most effectively injected tribalism into politics. It was Barry Goldwater (by opposing the Civil Rights Act) who re-racialized the competition between the two parties. It was former California Gov. Pete Wilson who cultivated a fear of migrants for political purposes. It was Newt Gingrich who disdained comity and embraced politics as combat. And it is Donald Trump who has given angry whites their own form of identity politics.

As an electoral matter, Sullivan finds the two American tribes "eerily balanced" and committed to obliterating the other side. We are seeing what happens when an unrepentant tribalist controls the presidency. Depending on the political fate of the House of Representatives, we may see what happens when the opposing tribe tries to remove him.

The problem identified by Sullivan is that tribalism is our default value — the "our" here covering all Homo sapiens. The ability to quickly and intuitively distinguish "us" from "them" — likely someone from another tribe intent on taking resources or lives — was a tremendous evolutionary advantage on the plains of Africa. It is slightly less helpful in the halls of Congress. But the history of demagoguery shows how useful it can be in the gaining and holding of power.

Sullivan believes that America's founders would have been surprised by our cultural tribalism and skeptical that any republic could survive it. I'm inclined to think that Alexander Hamilton — who viewed men as essentially "ambitious, vindictive and rapacious" — would be unfazed. But few (or none) of the founders would have viewed political parties based on cultural identification as a positive thing.

Most interestingly, Sullivan proposes a response to tribalism that is not structural but essentially spiritual. He urges a renewed appreciation of individuality, citing himself — a gay Catholic, conservative independent, religious secularist — as a misfit challenge to tribal conformity. As an evangelical sympathetic to gay rights, a Republican critic of Trump and a compassionate conservative, I can relate. We need a political system that makes room for human complexity.

"No tribal conflict," he says, "has ever been unwound without magnanimity."

We need the spirit of Abraham Lincoln and Nelson Mandela in our politics, which is essentially to call for a miracle. It is the secret strength of democracy that miracles occasionally happen.

Michael Gerson is a columnist for The Washington Post. Email,   michaelgerson@washpost.com.

Michael Gerson is a nationally syndicated opinion columnist for the Washington Post. Gerson serves as senior adviser at One, a bipartisan organization dedicated to the fight against extreme poverty and preventable diseases. Until 2006, Gerson was a top aide to President George W. Bush as assistant to the president for policy and strategic planning.