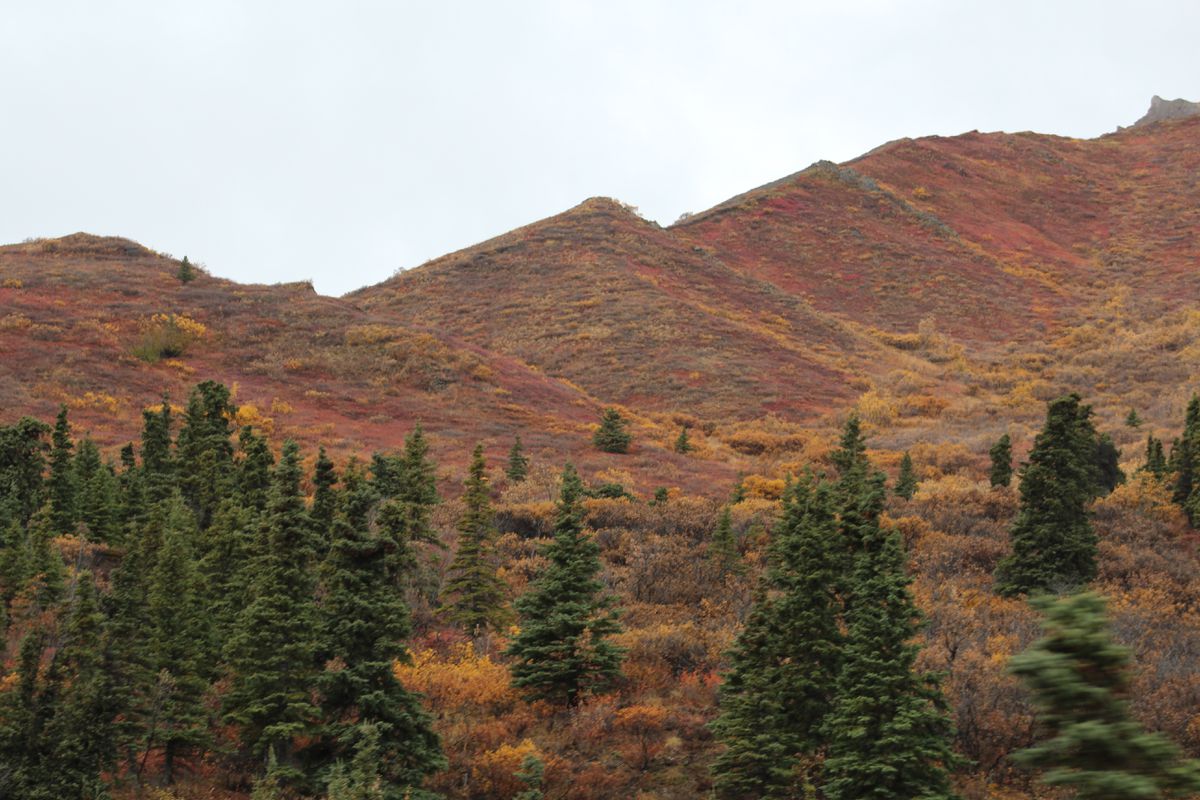 DENALI NATIONAL PARK — One of the largest bull moose I have ever seen faced off against a smaller animal about 30 yards away, the two eyeing each other as the light faded early Monday evening.

We stopped to watch the standoff for about 20 minutes near the end of a daylong trip along the park road.

They looked each other over like two wary boxers, stepping carefully, first this way then that, without looking away or pretending this was a friendly encounter.

We guessed there were cows nearby and it appeared the two might fight, but then the smaller animal retreated a few hundred yards and the giant bull sat among the bushes. A half-mile away, his giant rack popped up amid the vegetation like a signpost.

We witnessed this drama on the south side of the 92-mile Denali Park Road, where most of the green has given way to yellow, brown and shades of red. A friend of mine won a pass in the annual Denali Park Road Lottery, and while Monday was not his first choice, it was a good choice, despite the clouds and the rain.

On summer days, thousands of people travel the road, most in buses, while the annual fall lottery exercise has a more relaxed feel. Thousands of people apply every year for one of the 400 daily permits issued for the extended weekend during which private traffic is allowed.

The experience is quiet and spectacular. Some people think success is measured by whether the clouds part long enough to see the mountain, but that is only a small part of the journey.

On a whiteboard inside the Eielson Visitors Center, travelers posted sticky notes answering the question: "What does Denali mean to you?"

"Federal overreach," wrote one unhappy camper. Another said, "Sick. Cold. I want my cat. I want to go home."

The best answer came from the person who said Denali is a place where you can "see amazing things and spend time with friends and family." Getting to make this trip one more time with three of my best friends made the venture a success.

I loved the climb and descent of Polychrome Pass, which may be the best section of road in Alaska, if you don't get too close to the edge and you aren't there when the road is icy.

Cold rain fell at times, and isolated occurrences of the word "snow" had already popped into the region's forecast. We could see snow at higher elevations.

In terms of wildlife spotted from or near the road, it was one of my best trips. We saw seven grizzly bears, four moose, 35 sheep, lots of ptarmigan, grouse, ducks, and a couple of swans, the latter feeding eagerly in Wonder Lake, near the end of the road.

One of the bears, which we studied with binoculars, was digging ferociously into the hillside and knocking big rocks down a steep slope as part of the excavation, eager for another quick meal in the days before hibernation.

I have photos of our various long-distance animal encounters, but looking at them later they reminded me of pictures of the night sky in which one point of light looks exactly like another.

Lacking a telephoto lens for my camera, I came back with photos of dots on the hillside. There are white dots of sheep and brown dots of bears and moose.

These will mean nothing to some people, but those who appreciate dots will understand.