Anchorage may not be as diverse as you think. Or as equal racially. 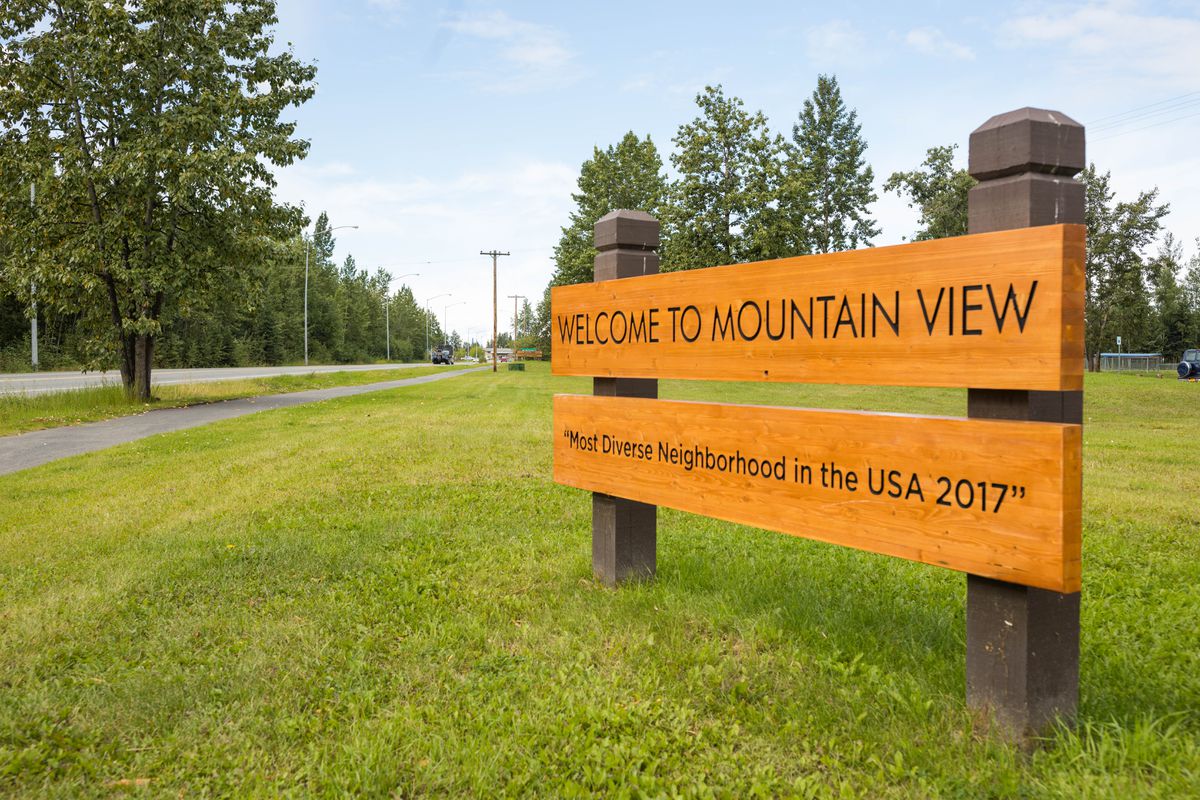 The city recently replaced old signs that had proclaimed Mountain View “USA Neighborhood of the Year 1989” with new ones recognizing its diversity.  (Loren Holmes / ADN)

The city recently replaced old signs that had proclaimed Mountain View “USA Neighborhood of the Year 1989” with new ones recognizing its diversity.  (Loren Holmes / ADN)

Anchorage is not one of the most diverse cities in the world. Not even in the U.S. I'm sorry, it's just not.

Our leaders praise our diversity, which has increased, and we do have some very diverse schools and neighborhoods. That's good. I'm proud to be from a town that is at least officially proud of its minorities.

But as a city, we're about average in our racial and ethnic diversity. And in the work that matters more than numbers — the work of integrating newcomers into Alaska's wealth and privilege — we have a long way to go.

"Diversity is one thing. But equality? In terms of income, in terms of educational attainment, in terms of even health … we don't see that," said E.J.R. David, a psychology professor at the University of Alaska Anchorage who studies racism. "I think a lot of those issues are in danger of being hidden and ignored when we keep singing 'Kumbayah' and saying how diverse we are."

UAA sociology professor Chad Farrell got the diversity meme started several years ago when he released an analysis of public school and census data that showed East was the nation's most diverse high school and Mountain View its most diverse neighborhood.

But many people didn't get to the next paragraph, explaining the way those numbers were calculated. They measure something interesting and important, but not exactly what many people seem to think.

"I've noticed this myself over the years — that things tend to get exaggerated — and I've had to correct that to people," Farrell said. "We're not the most diverse community in the United States, and that's really obvious."

Many communities in America have no majority population at all, including rural small towns and New York City. But Anchorage is 60 percent white (excluding Hispanics).

The really unusual thing Farrell found was how the patchwork of neighborhoods feeding into Anchorage public schools mixes children of different backgrounds. Unlike other parts of the U.S., affluent white families have not fled to monochrome suburbs or pulled back to private schools.

East High and Mountain View also won the diversity prize with Alaska Natives, a special slice on Farrell's pie charts. Alaska has a larger percentage of indigenous residents than any other state.

The other diversity marker, the more than 100 languages spoken by families with children in Anchorage schools, is a bit misleading. The vast majority of the languages have just a few speakers — and that's common in big school districts like ours.

But that's a numbers game. How does Anchorage diversity look at work, in government, on the ski trails, at hospitals or restaurants?

Farrell also studied inequality. He ruefully noted that that research got a lot less attention.

I began consciously noticing after a visit to New York, a truly diverse city, where everyone looked different everywhere I went. I didn't see diversity only in the streets. Upscale restaurants, shops and offices also had faces of all shades.

In Anchorage, school kids mix, but economic class mostly keeps the races apart. Minorities staff the big box stores and ethnic restaurants, with little chance for advancement, but are underrepresented among teachers and other professionals, government officials, office workers and elected officials.

Numbers from the Census Bureau's American Community Survey show how income divides the races here. In Anchorage, the income difference among the races is larger than it is in the rest of the country.

"Even if we accept the myth that all of Anchorage is very diverse, we still have to look at that imbalance between power and access to resources between different groups of people that make up our city," said David, the UAA racism researcher. "If you look at that, you see a very clear imbalance."

[How some Anchorage neighbors redeemed the city's racist past]

David immigrated from the Philippines to Barrow (now Utqiagvik) at 14. His father drove a cab and worked in the post office there. After Barrow High School, he went to UAA and then graduate school at the University of Illinois. Ten years ago, he returned to be a professor here.

So David is a counter-example of Alaska's lack of upward mobility for minorities — he made it.

There's data on that, too. Hunsinger said Alaska's racial income disparity may reflect age differences. White Alaskans are older — we have a lot of baby boomers — while minority populations have grown recently with young people and families who are at a less-affluent stage of their lives.

Alaska's population has among the fastest rates of churn in the U.S., with many people constantly coming and going. Transient people tend to be young and, in the U.S. today, tend to be non-white. That's why our diversity has risen so rapidly.

But David said something much more disturbing than demographics is causing the divide.

National research shows that second-generation immigrants are not doing as well as their original immigrant parents in education and income. That contradicts what our American mythology tells us should happen.

David suspects that the second generation may respond to racism differently. It's more damaging to be rejected by your own culture, as a second-generation American, than to encounter prejudice as a newcomer.

And racism is alive in Alaska.

In a survey, David and his colleagues found 55 percent of Asians and Pacific Islanders in Alaska reported racial and ethnic discrimination — results no better than found nationally.

We have made a good start in Anchorage by making diversity a point of pride. Now we should start the real work of making sure everyone has an equal chance at success in this multicultural society.

"I think Anchorage has a great opportunity here to do something special within this diversity that we are very proud about," David said. "Instead of just celebrating it, which is great, we can be a leader here. We can do something with it."