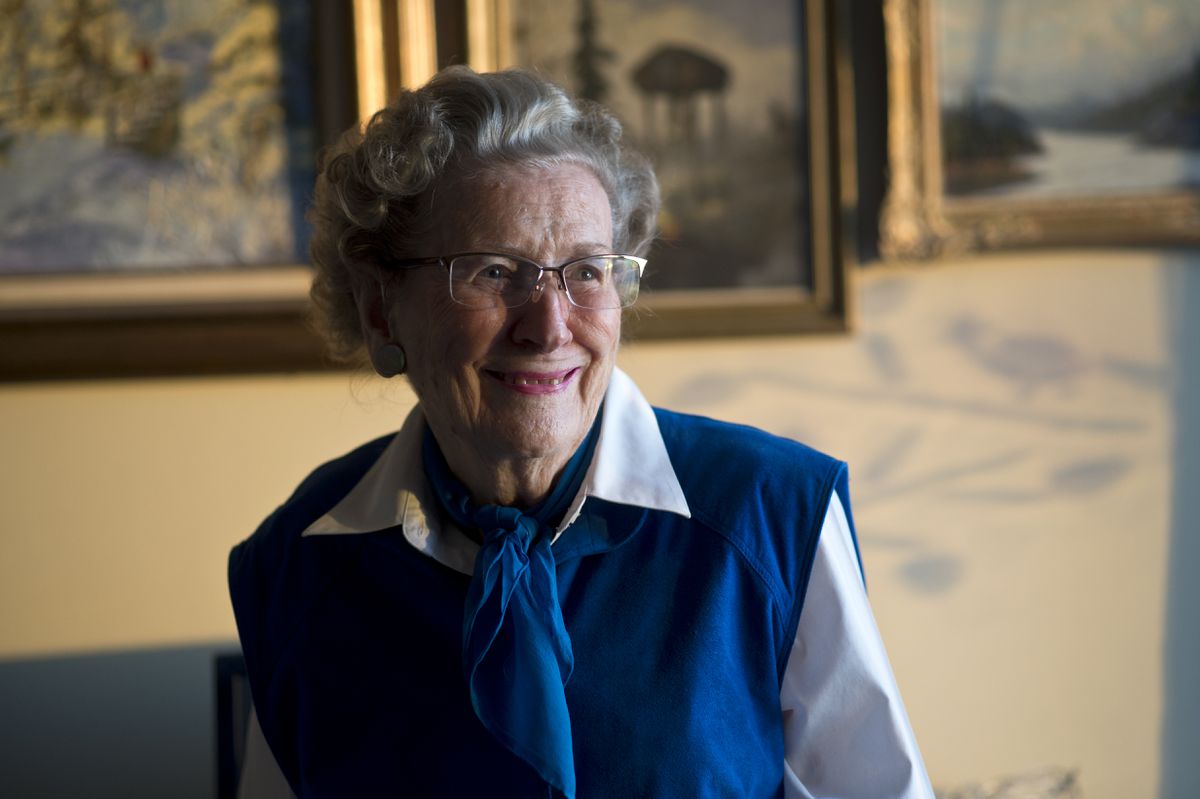 Lucy Whitehead's father swapped her — or at least the hospital bill for her birth — in exchange for President Warren G. Harding's halibut dinners on the 1923 trip when he drove the golden spike finishing the Alaska Railroad.

She showed me the menus from the President's railcar. Evidence of the finances may also lie somewhere in the yellowed papers she keeps in her little room at the Anchorage Pioneer Home.

But talking with Whitehead was too much fun to get hung up on details.

Her life spans our young city's history. Her older sisters were born when the city had barely started.

[Mystery solved: The surprising life of the man who founded Anchorage]

It was December, 4, 1917, just two years after federal railroad builders unloaded their materials on Ship Creek, near a tent city that sprang up. The twins were so small, just two and a half pounds for Helen and one and pound and a half for Mary, that they were expected to die.

Townspeople filed in to view the city's first twins, the tiny doomed babies. But Dr. J.B. Beeson didn't give up on them. He called out railroad carpenters to build an incubator, warmed with lightbulbs, and the girls survived.

They became a tourist attraction. The family eventually opened the Twins Café, named in their honor. Visitors paid to pose with them in their adorable dresses. Lucy still has postcards showing her sisters.

In fact, she still has one of the sisters. Helen Osborne also lives in the Pioneer Home, having celebrated her 100th birthday last month. (Sadly, she isn't doing well, and Whitehead declined to introduce us).

I had a couple of lovely visits looking at Whitehead's clippings, scrapbooks, photos, letters, journals and art. She was tirelessly cheerful. Anchorage gave her a wonderful life, including almost 74 years of marriage to her husband, Gib, who died in 2015.

Her memory is extraordinary. Cyn Premo recalled when Whitehead was presented with a photo of a large group in an old black and white print. A visitor hoped to identify figures from the city's past.

"Lucy went through and basically gave a short biography of every person in the picture," Premo said. "It was just amazing. I was thinking, 'I wish we could preserve this person's brain forever.'"

Premo, a former nurse, helped the Whiteheads in 2014 in their South Addition home. They became good friends. Premo saved the precious papers from being trashed during the move to the Pioneer Home.

But Lucy doesn't let anyone handle her files normally, not even Premo.

The papers tell the story of Whitehead's remarkable parents.

Her mother, Mary Davis Dempsey McDannel, born in Wales, came to Alaska as a single woman 1913 for a two-week visit, but loved it and stayed, working as a housekeeper in Juneau before heading for Ship Creek in 1915 to get in on the founding of a brand new city.

In the tent city she worked as a waitress for the Alaskan Engineering Commission, the agency building the railroad. She married a trapper, Joe Dempsey.

Dempsey sounds like the worst husband ever. He demanded Mary accompany him on the trapline, traveling by dog sled, when she was quite pregnant. She stayed home and gave birth to the twins, Helen and Mary.

The next year, 1918, the year of the world flu pandemic, with the two babies at home, she got pregnant with another pair of twins. Again, Dempsey demanded she go out on the trap line.

Mary refused. He left her home alone in a cabin on the edge of town, 7th Avenue, chopping her own wood and hauling water two blocks from the Catholic church, on 5th.

This time, her twin babies died and Mary divorced Dempsey.

She was raising the girls alone when she met Whitehead's father, whom she married in 1921.

James "Casey" McDannel had made money in three gold rushes. He built the grand Hotel Casey in Goldfield, Nevada, before traveling north to gold stampedes in Dawson City, Yukon, and Nome, where he had a restaurant in 1902. In Anchorage he operated a hotel, apartments and the cafe.

In 1920, McDannel won a contract to run the dining cars on the new Alaska Railroad. He took great pride in the quality of the food and service.

Perhaps too much, because when he was hired to serve the President, he got carried away. He printed colored menus, each with a painting by Sydney Laurence.

"Dad didn't need four or five different menus, but he wanted them," Whitehead said. "I remember Mom talking about the fingerbowls for all the fish he was going to be serving the President. I think it just got too fancy."

On July 15, 1923, Harding drove the golden spike in Nenana (after missing it twice). But on the return trip, he grew ill. His doctor blamed bad Alaska seafood (apparently shellfish on the voyage south, not McDannel's cooking). On August 2, Harding died in a hotel in San Francisco, probably of an unrelated heart attack.

Lucy was born later that year. The delivery was her mother's second Cesarean section and took five hours in the federally run Anchorage hospital. The bill came to $500, a huge sum.

McDannel refused to pay. He hadn't been paid for the president's trip.

Finally, seven years later, Congress paid $500 for Harding's meals. It was less than McDannel had spent, but enough to cover Lucy's birth.

"Even Steven," she said.

But the family's luck didn't improve. McDannel died in 1930. The Depression worsened the stagnant economy in Anchorage. Mary lost the businesses and properties, holding onto only the apartment building on 4th Avenue where Lucy grew up.

In 1939, the government tore it down to build the Federal Courthouse. Lucy met Gib the next year, at a Rainbow Girls dance.

But that's another story. Lucy Whitehead has so many.

The Pioneer Home is full of treasures.