Would I want my kid to turn out like Charles Wohlforth? Maybe not. 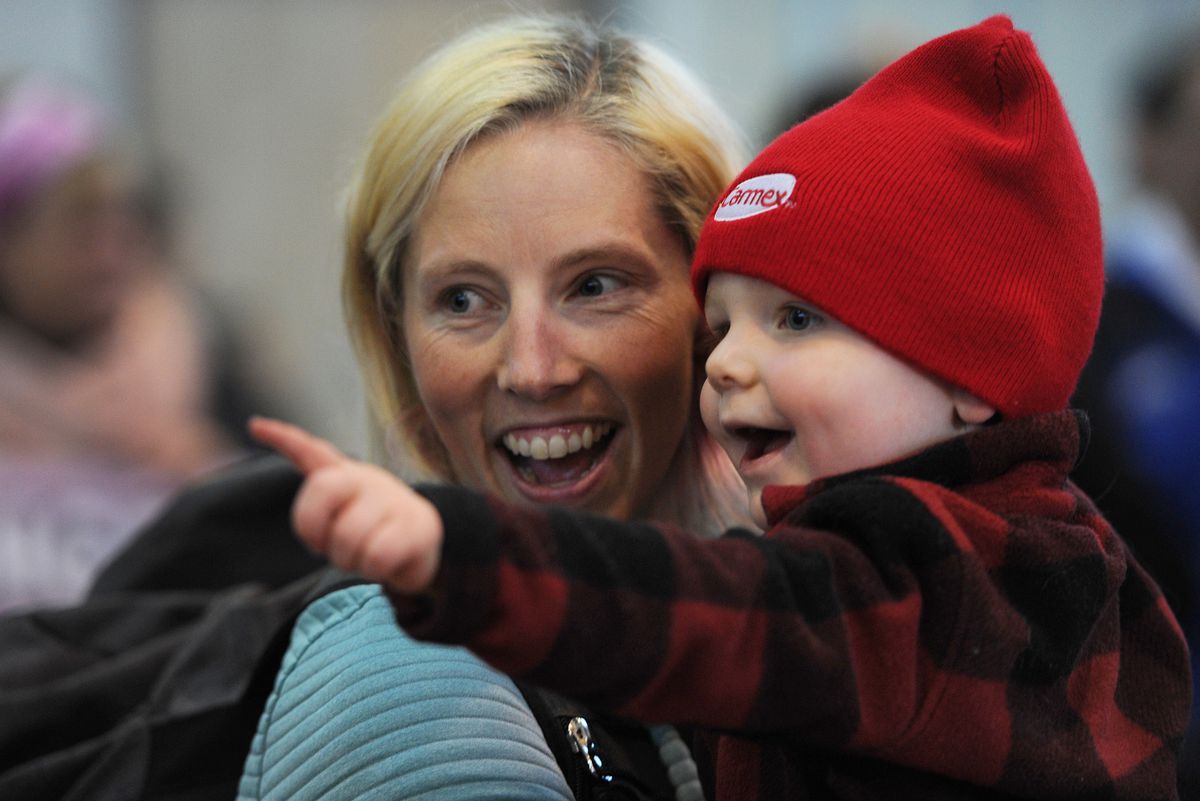 Five-time Olympian Kikkan Randall holds her two-year-old son Breck on Sunday, April 1, 2018, after being reunited at the airport while returning to Anchorage for the first time since winning a gold medal in the women’s team sprint cross-country skiing event at the Winter Olympics. (Bill Roth / ADN)

Five-time Olympian Kikkan Randall holds her two-year-old son Breck on Sunday, April 1, 2018, after being reunited at the airport while returning to Anchorage for the first time since winning a gold medal in the women’s team sprint cross-country skiing event at the Winter Olympics. (Bill Roth / ADN)

Of all places, the Anchorage Daily News is not where I thought I would read the headline: "Would I want my kid to be like Kikkan Randall? Maybe not."

I understand that Charles Wohlforth's point was not to disparage Randall. Most of his column celebrated her many, many achievements.

But, when a hometown hero finally strikes gold after a career of incredible work and sacrifice — when she takes a sport that most Americans view as a winter oddity that NBC airs in the middle of the night and makes it a source of national pride — is it really the role of her hometown paper to print a column that begins, "I've gone back and forth about whether I would want one of my daughters to be like Olympic gold medalist Kikkan Randall"?

No one would pose these questions if Kikkan Randall were a man. I don't remember anyone second-guessing Tommy Moe after he won Olympic gold in 1994. (In my hometown, Wasilla, we just named a side street next to the Mug Shot Saloon in his honor.)

No one asked if Moe spent enough time at family gatherings. No columnists pondered, did he "train too hard" to have a normal college experience? No one lamented that "the price to be paid is so high" when Moe seized his medals on the slopes of Lillehammer.

I can only speak from my own experience, when I first saw Kikkan Randall ski, before the Subway commercials, the Fast and Female summits, the pile of World Cup wins, before Olympic gold and interviews on the "Today" show. It was the turn of the millennium, and I was a Wasilla High School freshman at my first ski meet, still learning how to stay upright on my older brother's hand-me-down skate skis.

Endurance sports weren't big in the Valley in those days — seeing a gangly 15-year old running along the side of the Parks Highway was an occasion to yell, "Run, Forrest, Run!" from the open window of a pick-up truck. I almost hadn't joined the team the first time I saw the spandex uniform I would have to stretch over my muscle-less frame. At Wasilla High, we were the Mighty Ducks of Nordic squads. We didn't have the depth of Service or West. We didn't win state championships, except for the cumulative Team GPA award, three years running.

The snowfall had been light that year, so teams from around the state raced on a particularly bumpy course outside the Sheep Mountain Lodge. I did more than my share of face-planting as I stumbled towards the cup of hot cocoa waiting for me at the finish line.

During the women's varsity race, I caught a flash of someone in an East High uniform as she streaked down the mountain in a tuck, leaned into a hairpin turn at the very edge of balance, caught a ski tip, and tumbled head over boots into the snow, powder erupting like a meteor strike. She sprung up and sprinted away, turning her poles over faster than the pistons in a snowmachine engine. "Who was THAT?" I asked. "Oh, that's Kikkan Randall," one of the older guys shrugged. "She's going to the Olympics next year."

There is something special about seeing that level of talent in person, self-evident even then, that leaves a high school kid in awe. I knew that I would never — ever — be as fast as Randall. But seeing her fall and get back up like that still inspired me, like thousands of others who have seen her race in the years since. Seeing Randall ski that day made me want to try harder, to stick with the weird sport of cross-country skiing, to believe that yes, even kids who grow up at the far northern edge of the world can have a shot at Olympic glory.

I'm not a father yet, but I know one thing. If I have a daughter, or if I have a son, do I want them to grow up to be like Kikkan Randall? Absolutely.

Charles Boyle is a four-time Tour of Anchorage finisher who has never won a ski race at any level of competition. He is completing his MFA at UAA, where he is writing his thesis about male authors who write from female perspectives.