These refugees had nothing, but they gave her back her life 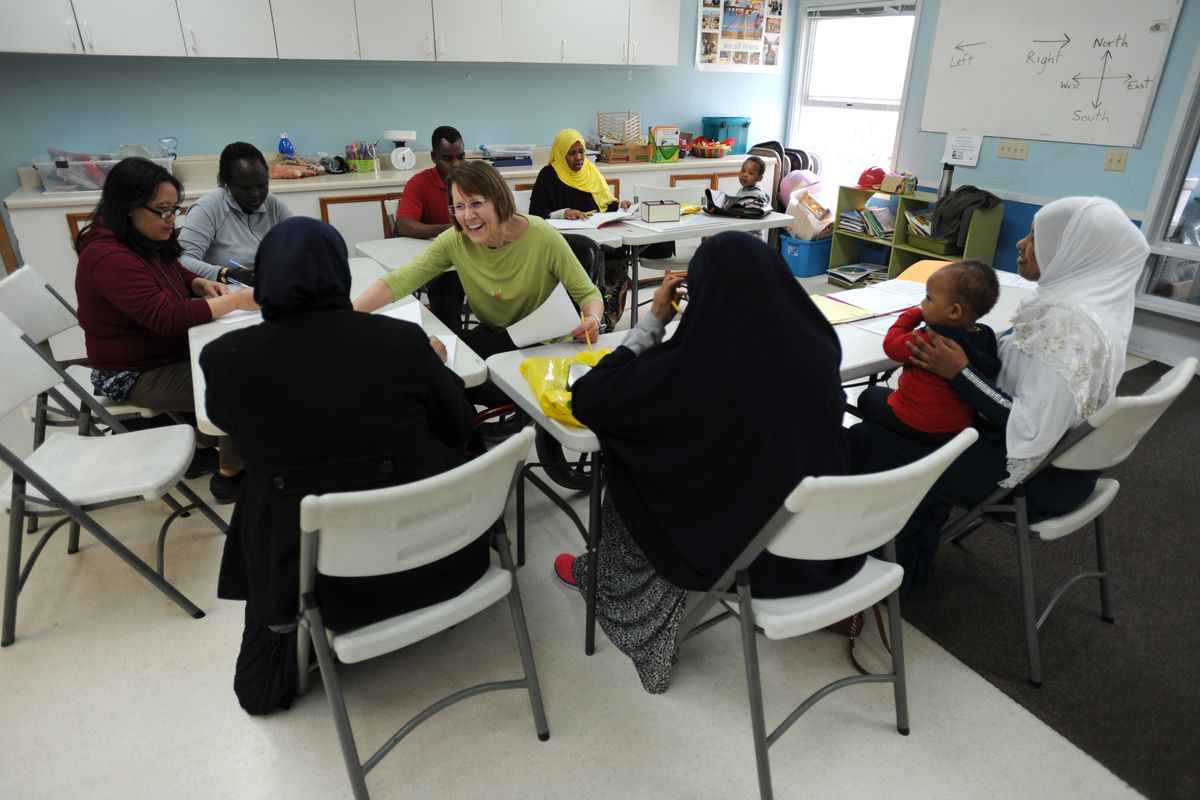 Refugees who could barely speak English brought Cindy Johnson back from physical collapse. They thought she was helping them, but they gave her her life back.

Johnson's multiple sclerosis rapidly advanced after a tragedy in 2015. Before her son's accident, she could walk. After, she needed a motorized wheelchair.

Even her thinking declined. Neurological tests showed she was losing her cognitive abilities.

Then, a year ago, she began volunteering to teach refugees. With their support, she is wheeling herself around, driving, using her hands. And she has an infectious smile.

"I'm so fortunate. I get invited to things at their homes. They share things. They bring me food all the time," she said. "I get so many kisses."

I met Johnson at the Catholic Social Services Welcome Center, a little frame building in East Anchorage. She spun her wheelchair within a horseshoe of plastic folding tables, connecting in turn with each student. East African women wore shawls, their children toddling around the edges.

She teaches language and citizenship classes twice a day, four days a week, and creates curriculum. Her students have become her friends.

"They are always helping me with my wheelchair. They are getting me things. And they always come out to my car to help me," Johnson said.

[How refugees in Alaska feed families facing famine in Africa]

When a refugee couldn't make it to class because of a lack of child care, Johnson went to her apartment in Mountain View to teach. The families have no money, but they invite her in for meals.

A Hmong family once asked her to attend the birth of their child so she could explain to hospital staff that they needed to keep the placenta and bury it under their home.

"If you don't, the spirit will wander," she said. "Getting the placenta wasn't a problem, but they live in an apartment and it was January."

Johnson's MS, first diagnosed 20 years ago, is progressive. The diagnosis ended her career teaching gifted middle-schoolers in Anchorage. She could no longer write on their papers. She had to give up running and skiing, too.

But she started a second career teaching English to adults (that's when she helped the Hmong family).

Johnson said teaching immigrants is mostly oral. Before they can learn to read and write English, they need to understand its sounds and how it works.

They watch her lips and listen to her careful repetition of phrases. The climb is immense. It starts at "yes and no" and leads, for the citizenship test, to "Emancipation Proclamation" and "Separation of Powers."

Johnson was teaching in Oregon when her son, Mike Johnson, a successful building contractor, lured her home to Eagle River with the offer that they would take care of each other in a 10,000-square-foot house he was building on a mountaintop tract of land.

Cindy did the cooking and cared for Mike's daughter. He worked on the house, which was designed with her limitations in mind. But at that point, she was still on her feet, sometimes with a cane.

She remembers a wonderful three years together. Until a Tuesday evening in March 2015.

While she was cooking dinner on the far side of the house, Mike was working on a water well with several other guys, fracking it to increase the flow. The job involved dropping the dry ice into the well and then clamping on the well head cover.

He told her he had enough dry ice for one more drop. She said to go ahead because the meal was ready.

She blames herself for that, but she didn't know the potential danger of working with frozen carbon dioxide. The well head was in an 8-foot hole. The evaporating carbon dioxide displaced the oxygen. Mike, down in the hole to clamp the cover, passed out. A man went down to rescue him and also passed out.

By the time Cindy knew anything was wrong, fire trucks had already arrived. Firefighters went down with breathing apparatus and pulled out the men, but both ultimately died.

"There were fire engines and ambulances, and the news everywhere, and there were court cases," she said. "My mind shut down for a while, I realize now."

Before the accident, Johnson didn't need anyone to help her. She planned to travel in Asia teaching English. But the stress of what happened caused a physical collapse.

Then, a year ago, she volunteered to teach at the Welcome Center.

"You know, you just get sick of yourself," she said.

After citizenship class, the students asked if she would come back again the next day. Some of them struggled with weak English, so she began teaching language classes, too.

And she learned about them. A mother whose three sons were abducted to be child soldiers, and who got only two of them back. A man whose wife disappeared in war, never to be seen again. A family split among three countries by President Donald Trump's travel ban.

But despite their hardships, poverty and grief — and her own grief — the classes are full of laughter.

She said the refugees always say yes, even when they have no idea what Johnson is telling them. She has learned to look them in the eye, joke, and test.

As she watched them learn, she started to heal, emotionally and physically. She got out of the motorized wheelchair.

The refugees brought her food, welcomed her into their homes, told her their stories — all to show gratitude.

For Johnson, it is about gratitude, too.

"Teaching has always been so rewarding to me," she said. "Rewarding and challenging both. But so much more so now. I'm so grateful that I've had this opportunity."