How students could lead a winning gun control vote in Alaska 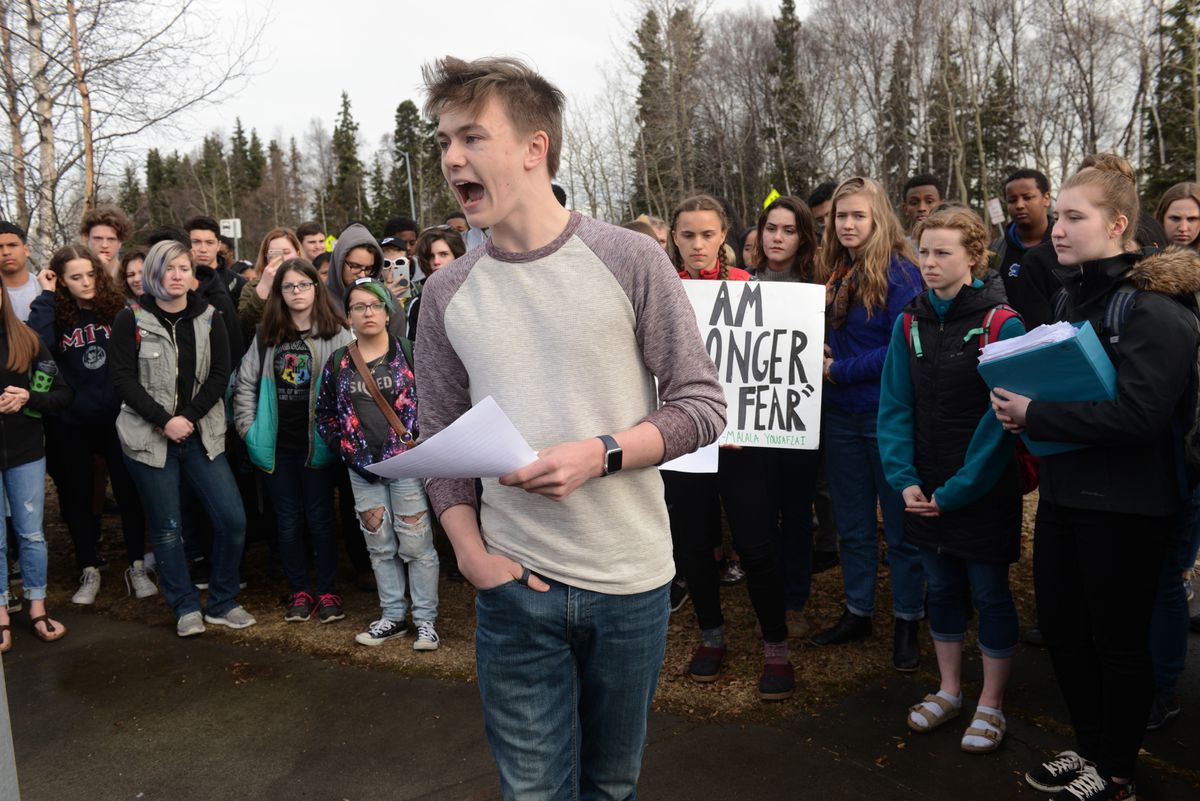 Burke Croft speaks to West High students in front of the school during a school walkout on the anniversary of the Columbine School Shooting to advocate for gun control in Anchorage on April 20. (Bob Hallinen / ADN)

Burke Croft speaks to West High students in front of the school during a school walkout on the anniversary of the Columbine School Shooting to advocate for gun control in Anchorage on April 20. (Bob Hallinen / ADN)

In Alaska, guns have more rights than people do. A bill to tip the balance more toward people died in a legislative committee this spring.

But a new power has entered the gun debate: students. Some of the teens who helped mount protests and school walkouts over the last few months now are pondering a ballot initiative to keep guns out of the hands of people with psychological or emotional disturbances that make them a threat.

A recent poll by Ivan Moore Research showed 84 percent of Alaskans support using a process like domestic violence restraining orders to temporarily seize guns from family members in crisis. But Republican legislators killed a much more modest bill at the behest of the National Rifle Association.

The bill, a redrafted version of HB 75, would have given police a little more authority, with judicial oversight, to seize guns from Alaskans posing a threat to themselves or others. It was modeled on a law in effect in Indiana since 2005, said Rep. Matt Claman, chair of the House Judiciary Committee.

[I sat down with my old political foe to talk about guns. Here's what we agreed on.]

I met with student organizers to learn if they have the drive to pull it off. I think they probably can.

They would put Second Amendment restrictions to a vote. A big deal in Alaska.

But all of our rights are partially restricted.

Police can take freedom from anyone they deem a threat to themselves or others for mental health reasons. No court order is then needed to hold that person for 72 hours in a mental hospital.

A victim of domestic violence can get an order from a judge, without the accused being present, temporarily denying that person access to his or her own home.

But Claman couldn't get a bill out of committee without setting a much higher standard for police to seize guns from dangerous people. Under the proposed amendments, police would have needed a court hearing with both sides present to take a gun. That's absurd.

"You go and apply and then you give notice to the person who is pointing a gun at his partner and you tell him to go to court in 10 days and explain why we shouldn't take your gun away," Claman said.

When an NRA lobbyist from Sacramento pushed the discussion to that point, Claman dropped the bill.

But the idea may not be dead. The students are picking it up.

"People really believe in this, and you should not underestimate this movement," said Burke Croft. "If we can do it ourselves and don't have to deal with all the BS in the legislature, we should do it."

Croft, a West High junior, helped organized the March for Our Lives protest in March and the school walkout last month, part of the national movement propelled by the Parkland massacre in February. He said at least a dozen Anchorage teens are equally involved.

Croft is a member of a political family. As a legislator, his father, Eric Croft, a Democrat, passed a bill taking Alaska to the extreme end of permissiveness in gun laws, making it legal to carry concealed weapons without a permit. He has won awards from the NRA and is a lifetime member. Eric currently serves on the Anchorage Assembly.

And he knows how to do a petition initiative. He led two that passed, making laws by public vote for campaign finance reform and for direct election of U.S. Senate vacancies (which came after Gov. Frank Murkowski appointed his daughter). Croft also led one that failed, on natural gas taxation.

It takes 50,000 signatures to get on the ballot. The next available general election isn't until 2020. That's a long time to wait and a lot of work for teenagers who, until they turn 18, can't even even collect signatures on their own.

Claman said adults are willing to help. But he added that it probably wouldn't happen without the kids.

Keegan Blain, a Dimond High junior and protest organizer, has believed strongly in gun control since losing a friend to self-inflicted gun violence. But until Parkland, she didn't know she could do anything about it.

"I've always known there was a direct connection between the presence of a gun, and an unmonitored gun, and what can happen," she said. "I didn't know how to advocate. I think mostly this movement just gave me a voice."

Taking guns out of the hands of Alaskans in emotional crisis would save many more lives than turning schools into fortresses.

From 2009 to 2015, 1,000 Alaskans were killed by gunshots, according to a report last year by the Alaska Division of Public Health. Of those 1,000 fatal shots, 750 were self-inflicted. A third of the 750 who died by suicide had a previously known mental health problem.

Not all suicides involve guns, but health studies show an easily available gun makes death much more likely, said Eric Boyer, of the University of Alaska's Center for Human Development.

"Most people can get through those life experiences, they just need a supportive community and family," Boyer said. "How do we keep firearms safe in a state where firearms are important, but keeping them safe from people when they aren't doing well in life?"

Maybe you've been affected by this plague of violence. I have. I've also been in the position of making sure a neighbor in an emotional crisis did not have access to his guns.

This is real life. Alaskans are living it. We're overwhelmingly ready for a law to help secure guns in these situations.

Perhaps teenage idealism could be the spark to make it happen.