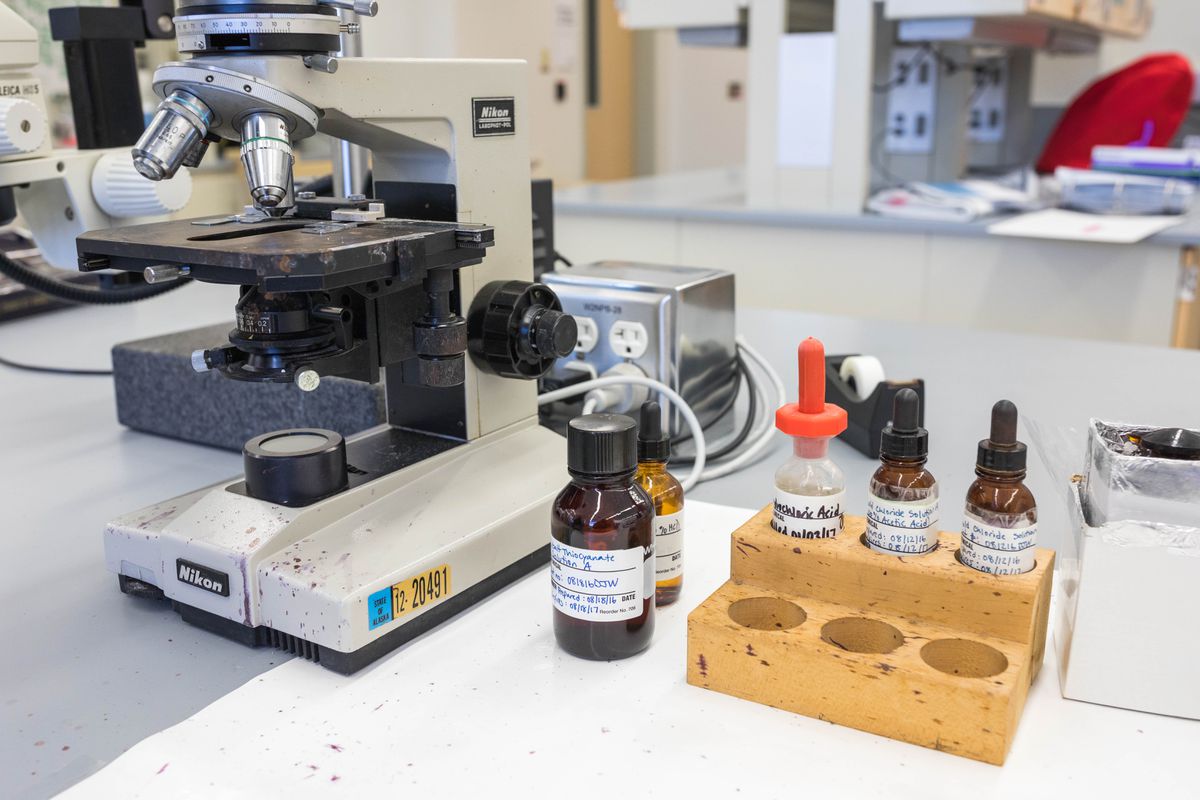 Chemicals in the chemistry lab at the State of Alaska’s Scientific Crime Detection Laboratory on Jan. 18, 2017. (Loren Holmes / ADN)

Chemicals in the chemistry lab at the State of Alaska’s Scientific Crime Detection Laboratory on Jan. 18, 2017. (Loren Holmes / ADN)

Armed with federal grant money, Alaska belatedly is beginning to address its shameful backlog of so-called "rape kits" — a shocking 3,484 of them — collected by authorities in various jurisdictions over the years and untested for a variety of reasons.

Alaska is not the only state struggling with a backlog. The Accountability Project estimates there could be "hundreds of thousands" of the kits containing DNA or other vital evidence of sexual assaults gathering dust in police stations across the nation. Alaska audited its backlog after the Legislature, in 2017's Senate Bill 55, demanded it do so.

You could be excused for wondering how many rapists, serial rapists and other violent criminals roam free today, hunting new victims because those kits languished. Some of Alaska's date back to 2000.

You could be excused for being more than a little angry. Every one of the kits has a story. Some of them are inexplicable. Take Mary's, for instance. (Not her real name.)

Barely in her 20s, energetic, athletic, she knew the man who eventually attacked her, but had not recently seen him. They had been friendly, and when he opened a bar early in 2013, she interviewed for a job, she said. She walked to the establishment, they talked and he offered her a beer. Then, they hit another nearby bar and eventually ended up at an upscale watering hole downtown.

"I ordered a beer, pushed it to the rear of the bar, covered it with a napkin and went to the restroom," she said. "When I came back, I finished it."

A security tape would show the guy she was with moved over, hovered over her beer while blocking the camera and slid back onto his bar stool before she got back, she said.

From there, they hit one last bar, where she saw a friend and, "I hugged her and looked up at the mirror," Mary said. "That's the last thing I remember." By this point, she said, she had downed two beers and a shot of tequila.

She awoke near noon the next day, hours late for work. She was fully clothed on her bed, lying on top of the blankets, her underwear in her pocket. Her cellphone and keys were missing.

Dazed, barely able to think, she went to her job, and, "As soon as I walked in, I knew something was wrong."

Mary was taken to Providence Alaska Medical Center, where she talked to police and a Standing Together Against Rape representative. She underwent lengthy, extensive testing. Later, a detective asked more questions. A lab test would find she had the hallucinogen PCP, or angel dust, in her system.

She waited for justice. She did not tell her father because she feared he would do what fathers are wont to do when their daughters are attacked.

Two years later, the detective on her case told her it was going nowhere; that prosecutors had declined to charge her attacker. "Not enough evidence," she said, "and I knew him already."

The guy in question is well known in Anchorage and to police. Facebook posts earlier this year about him, posts with allegations of similar attacks, can be found on its "Wanted: Mat-Su and Anchorage" page. They are numerous and savage — more than 300 of them, with some suggesting he is a longtime serial rapist.

Mary now is a confident, successful businesswoman who talks openly with friends and family about her experience. Because of that, other women have sought her out with their own horrific stories involving her attacker.

One, raped five years before Mary, told her she was drugged and remained conscious throughout her ordeal, paralyzed. She remembers every second, Mary said. Another, just six months ago, dined with him and he took her to his place, dropped all pretense and simply attacked her. Her screams alerted his roommate, who pulled him off her.

Her original detective pleaded with prosecutors to nail her attacker, Mary said. "They looked at the case and decided it wasn't worth going forward with. My new detective says from what he can tell, they never tested my kit. It's insulting to say that my kit wasn't worth testing."

Each of those 3,484 untested rape kits — including Mary's — represents a mind-boggling failure in the justice system, an affront to each and every one of the victims and their families. We likely will never know how many women were attacked by men who should already have been in prison.

While the state begins to address its rape kit backlog, Mary's attacker is free. To my everlasting frustration, I cannot name him because he has not been charged.

I hope that will change.