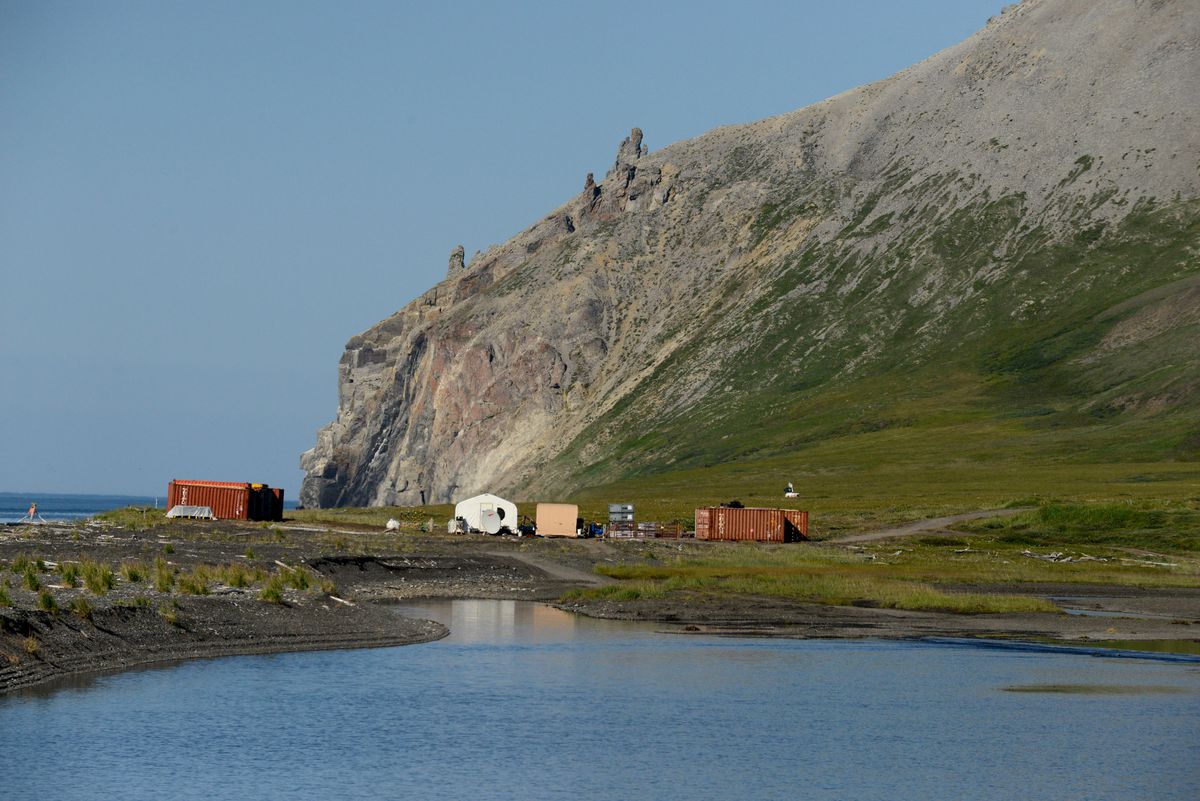 This August 6, 2014 file photo shows US Department of Energy cleanup activities at the Project Chariot Site. In the late ’50s, the US Atomic Energy Commission looked at creating an artificial harbor at Cape Thompson on the shore of the Chukchi Sea on Alaska’s North Slope by exploding nuclear bombs to blast out the harbor. (Bob Hallinen / ADN file photo)

This August 6, 2014 file photo shows US Department of Energy cleanup activities at the Project Chariot Site. In the late ’50s, the US Atomic Energy Commission looked at creating an artificial harbor at Cape Thompson on the shore of the Chukchi Sea on Alaska’s North Slope by exploding nuclear bombs to blast out the harbor. (Bob Hallinen / ADN file photo)

I recently finished Dan O'Neill's "The Firecracker Boys." It's a book based in sometimes wonky details, and not one I could read in short spurts, before bed, after drinking or in anyway distracted, so it took a while. And it's been a hell of a winter to learn more about how, circa 1960, the U.S. government thought it would be fun to blow up some Arctic Alaska coastline with a nuclear bomb because they could, a perception shaped largely by the fact that there weren't white people living there.

During the months it took me to make my way through the book, our nation's current administration, under the leadership of a president proudly unaware of the history he is part of, moved steadily forward on its plans to lease a section of the Arctic National Wildlife Refuge's coastal plain to oil companies, as well as unprecedented swaths of Arctic seas. I keep flipping through O'Neill's pages, finding parallels: the trivialization of health and safety by both reporters and decision-makers, the farce of public meetings, the statements from those in power suggesting that only Outsiders oppose their plans, and the framing of opposition as impediment to a narrowly defined notion of progress.

In another life, I will make a mix-and-match card game where players guess if a quote came from Project Chariot backers or current Department of Interior officials, and the challenge is in the fact that the dismissal of science, indigenous knowledge and survival, ecological integrity, and public process is a well-established American tradition. It will be a depressing game. No one will want to play it.

One could compare the statements from Project Chariot critic and scientist Don Foote, who wrote in 1959 that, "most Point Hopers were angered by speeches and lectures in Fairbanks, Juneau, Nome and Kotzebue, hundreds of miles from Ogotoruk Creek, while not one (Atomic Energy Commission) representative visited Point Hope, just 31.5 miles from ground zero…" to the ignored requests for public meetings in coastal communities on the Bureau of Ocean Energy Management's proposal to open nearly all Alaska coastline to offshore energy development; this past February, Alaska Public Media quoted Adrienne Titus of Unalakleet and Fairbanks saying, "Of course, there's only one meeting, and it'd be in the metropolis of Anchorage." She added "that many people from Native communities couldn't make it to the meeting."

In response to Titus' and others' concerns, Jim Kendall of the Alaska branch of BOEM said, "We needed to keep on schedule, we don't have unlimited resources." When the AEC did eventually visit Point Hope in 1960, and were caught off guard by residents' demands for substantive information, translated into Inupiaq, about the actual risks the proposed explosion would pose to their land and community, an AEC representative said, on tape, "We have a meeting in Kotzebue. We have to get back before dark."

One might ask how a government of a self-identified benevolent democracy has remained so unable to predict the public's needs at these meetings, and failed so consistently to schedule accordingly. Or one might recognize, as O'Neill suggests in the afterword of "The Firecracker Boys," that this is by design: "Rationalizations that bypass the public in matters of public policy threaten democracy in the most basic way…"

This framing assumes that democracy is a shared value, and all that differs is adherence to process in the face of a perceived threat (nuclear annihilation or at least technological usurpation, and/or whatever the opposite of "energy dominance" is, a concept that eludes me right now and likely always will, as the economies and ecologies that allow for either are more complex than could really allow for such a dichotomy — but I digress). O'Neill generously allows that this circumvention "may be a desire to save the country from a threat that, if it is claimed, the citizenry does not fully appreciate," a tactic certainly employed by our current president, though the purity of his or others' desires warrant a bit more examination. As theorist Susan Kollin points out in Nature's State, both extractive and preservationist narratives of Alaska's role in our nation's identity embrace a degree of American exceptionalism, which "forecloses the idea that the nation also engages in colonizing projects." This was true of Project Chariot then and true of Arctic drilling now, and of so much more before and in between.

And as in any colonizing nation, indigenous voices are likely to be trivialized and accused of being manipulated by their own internal critics, who are often driven by a colonizing project of their own: New York Times journalist Lawrence Davies' accusations of "keeping the Eskimos stirred up and 'giving direction' to the opposition to Project Chariot," as if opposition to seeing one's hunting grounds and water sources exploded for no good reason could not possibly have arisen locally. Today, as if he knew I was looking for a solid parallel, a commenter in the Fairbanks Daily News-Miner repeated the well-established claim that "The environmentalists think they can used (sic) the Gwich'in complaints to further their cause of keeping ANWR locked up," ignoring generations of Gwich'in stewardship of their sacred lands and decades of active leadership in the campaign against oil development in the Coastal Plain.

Les Viereck, another biologist whose principles and subsequent resignation from the University of Alaska Fairbanks jeopardized his career at the time, wrote, "A scientist's allegiance is first to truth and personal integrity and only secondarily to an organized group such as a university, a company, or a government."

Our roles as writers, then, might not differ much from what these men describe: diligent and critical observers, truth-tellers, free agents. O'Neill certainly succeeded with "The Firecracker Boys." I wonder what record we'll leave of today's messes for future comparisons — and what bursts and craters.

Erica Watson is an essayist living on the boundary of Denali National Park. Her work has appeared most recently in terrain.org, High Desert Journal, and Tin House's Flash Fidelity series. She earned her MFA in creative nonfiction at UAA in 2014.