Why I reduced the Permanent Fund dividend 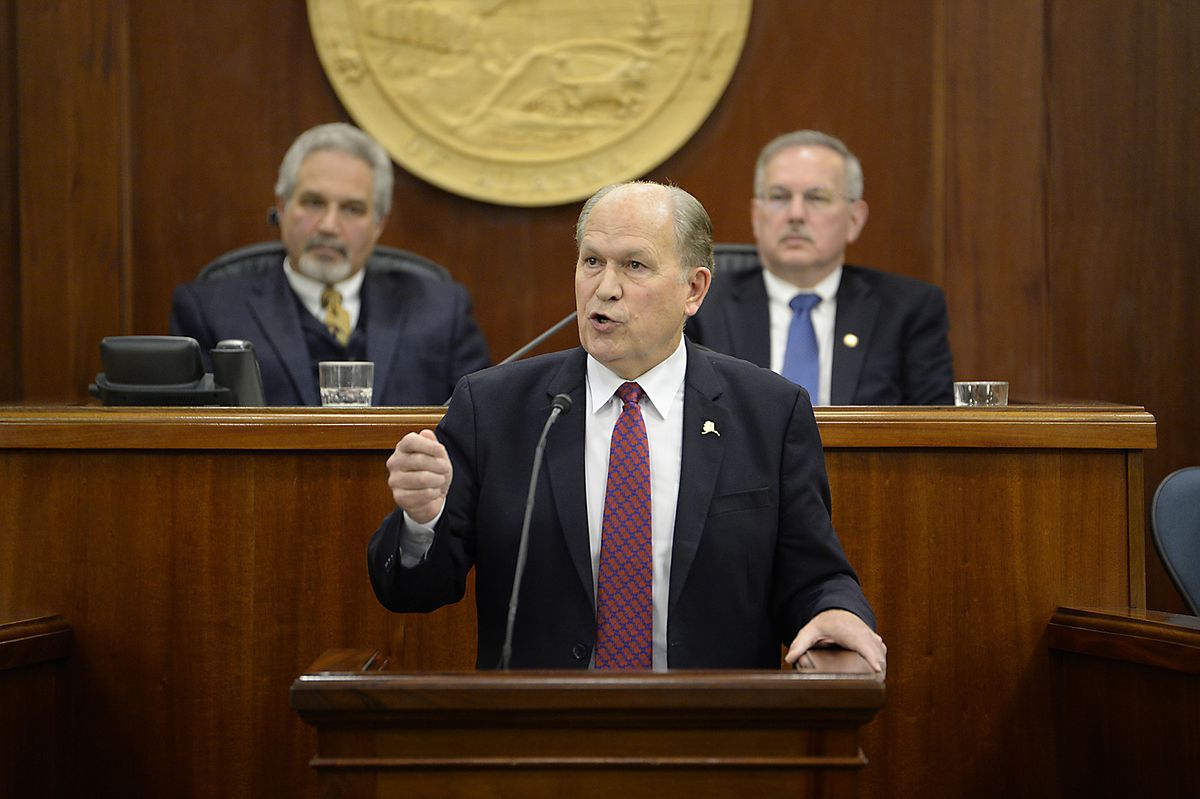 Alaska Gov. Bill Walker addresses a joint session of the state Legislature for his annual State of the State speech on Thursday, Jan. 18, 2018 at the state Capitol in Juneau.In the background are Senate President Pete Kelly, left, a Republican from Fairbanks, and House Speaker Bryce Edgmon, right, a Democrat from Dillingham. (Klas Stolpe)

Alaska Gov. Bill Walker addresses a joint session of the state Legislature for his annual State of the State speech on Thursday, Jan. 18, 2018 at the state Capitol in Juneau.In the background are Senate President Pete Kelly, left, a Republican from Fairbanks, and House Speaker Bryce Edgmon, right, a Democrat from Dillingham. (Klas Stolpe)

Why did I reduce the Permanent Fund dividend in 2016?

The decision to reduce the PFD in 2016 in response to Alaska's fiscal crisis will be one of the defining issues of this election. Our opponents on both the left and the right have criticized this decision.

Some Alaskans believe that it was a terrible decision that we never should have considered, that this decision was unnecessary, that if we had cut more out of state government, we could have avoided making any changes to the way we manage the Alaska Permanent Fund.

One of the main reasons I ran four years ago was because Alaska was running a $1.6 billion deficit and nobody was talking about it. This gap between our spending and what we were bringing in could have been addressed by budget cuts alone, without a PFD reduction or any new revenue.

However, days after we were elected, the price of oil collapsed, reducing state revenues by more than 80 percent. Alaska went from having the largest savings account in the country to the largest budget deficit of any state in the country — $3.7 billion — overnight.

In our first year, before we looked at any changes to the fund, we went to work to reduce the state budget. We did not want to propose changes before we had cut everything we felt we could. That meant closing more than 40 state facilities. It meant a loss of 77 positions at the Department of Public Safety alone (and that was the department with one of the smallest reductions). It meant reducing the state spending by 44 percent, or $1.7 billion, from 2013.

Ultimately, we reduced the budget to 2007 levels, with state employment at its lowest level in 15 years.

But we are literally at the point where large additional cuts could cost us more money then they would save.

That's why, while you see both of our opponents advocating for "additional cuts," you won't see them specify where those cuts should go.

Alaskans knew that we could not cut our way out of the fiscal crisis we were in. The alternative was either make some changes, or just completely spend down our savings.

And that's what the Legislature chose to do. Rather than risk the political cost of change, the Legislature spent down $14 billion in savings. That's $14 billion that we will never have back to invest in our schools, infrastructure, and public safety.

We were behaving like a guy who loses his job and decides to spend down all his family's savings before looking for a new job. We were about to lose the house.

I reduced the PFD in 2016 because the Legislature had made it clear that they were not willing to be the first to take any action that would result in less money going out to Alaskans. I had legislators tell me privately: "We're going to make you do what we should be doing."

I reduced the PFD in 2016 in order to leave that money in the fund, so that it could continue to earn interest and grow the fund, strengthening Alaska's greatest asset. Every dollar that I vetoed from the PFD stayed in the fund.

I reduced the PFD in 2016 so that the Legislature would find the courage to pass a fiscal plan compromise. That compromise has provided the stability that businesses need to invest in Alaska. It has reduced our budget deficit by 80 percent.

Ultimately, I believe that the decision to restructure the Permanent Fund will allow both the Permanent Fund and the dividend to grow long-term. That's what we saw this year, with the PFD increasing to $1,600, well above the historic average.

The decision to reduce the PFD was the hardest decision I've ever made. It affected many Alaskans, no question about it. Lt. Gov. Byron Mallott and I believed that the alternative would hurt much worse, by endangering the future of the Permanent Fund and the dividend long-term.

Bill Walker is the eleventh governor of Alaska. He is running for re-election as an independent.

Editor's note: This column, as it was originally published online, contained a link to campaign literature that has since been removed. It was taken offline while the ADN's editorial board drafted a blanket policy to deal with campaign op-ed columns. It was not taken offline because of any fault with the piece or linked material, and the link has been removed only because the editorial board opted to not allow links to campaign material in any campaign's op-ed submissions.