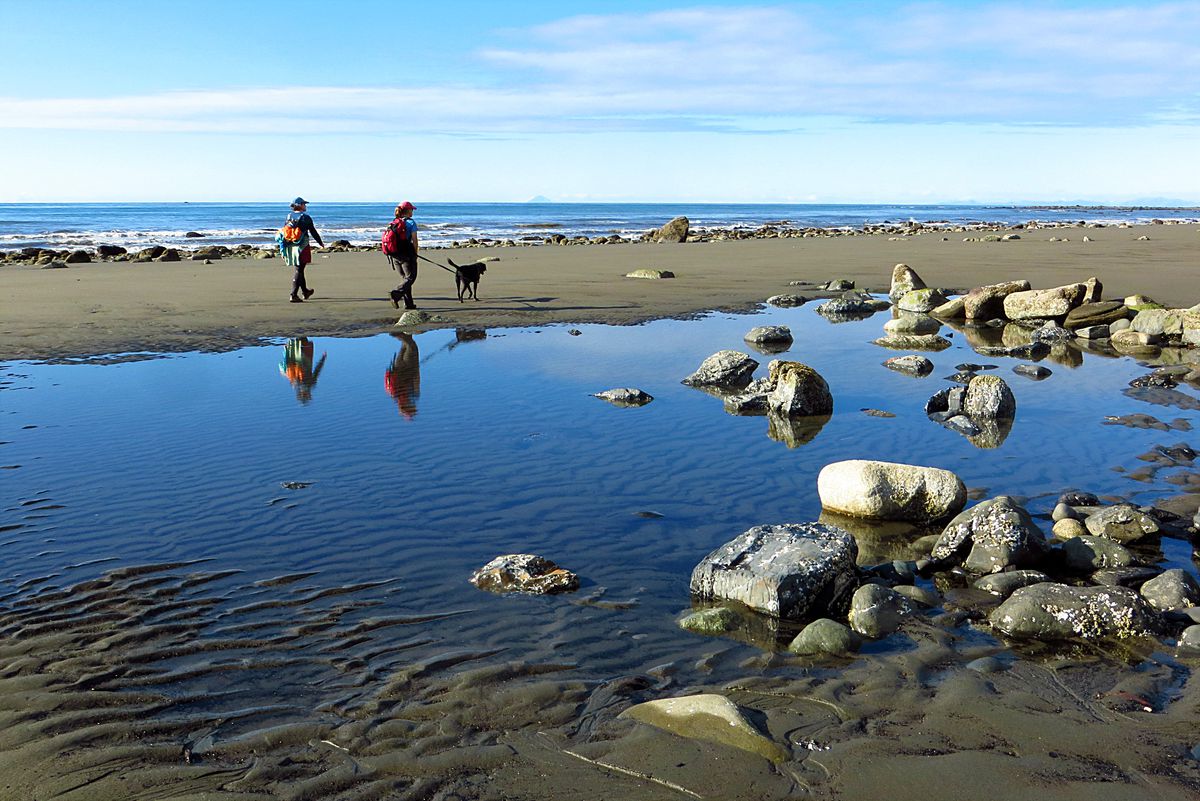 Visitors walk along the beach near Homer. (Clark Fair photo)

Visitors walk along the beach near Homer. (Clark Fair photo)

Friends and relatives have been much more enthusiastic about visiting us since Yvonne Leutwyler and I moved to Homer two years ago than they ever were during the three years we lived in Dillingham. In fact, we spent more time attempting to persuade than entertain while we were in Bristol Bay; now it's just the opposite.

The low visitor turnout in Dillingham was discouraging but understandable.
The logistics involved in getting there can be rigorous. President Obama needed Air Force One and a small army of Secret Service agents when he stopped by in September 2015.

Visitors cannot drive to Dillingham — unless they're using the lake road from Aleknagik or driving a snowmobile over the tundra from Manokotak. Homer, on the other hand, despite being at "the end of the road," is part of arterial Alaska. It has been connected by the road system since 1949 to almost all of Southcentral Alaska, and beyond.

Now monstrous motor homes migrate south and flock like seagulls on the Homer Spit. Ferries and cruise ships dock in Homer and disgorge their human cargo onto tour buses that trundle to selected Chamber highlights around town.

In Dillingham, almost everyone and everything arrives by air or by sea.
When we first moved into our Beluga Bluffs apartment in 2013, we thought the exotic pull of Bristol Bay would attract visitors. We effervesced about this "vacation destination" in letters, cards and phone calls. We encouraged. We cajoled. We retained enough empty floor space in our spare bedroom to accommodate an inflatable mattress.

And in November 2013, someone took the bait. A Seward friend named Stephanie got our hopes up by deciding to visit for Thanksgiving.

November in Dillingham is sedate. Salmon are no longer running, gulls no longer squawking. Cannery workers and fishing guides have returned to the Lower 48. A churning bed of ice has usually filled Nushagak Bay, preventing more barge arrivals. And most fishermen and moose hunters have hunkered down for the windy winter to come.

Fortunately, Stephanie is easy to entertain and not easily deterred. We hiked up to China Cap and summited Snake Lake Mountain. We went for a couple of frosty runs. We shared a turkey dinner with Dillingham friends. We drove out to Lake Aleknagik. We played (and won) the trivia competition at the Willow Tree Bar.
Unfortunately, our first visitor from beyond Bristol Bay was also our last.
Oh, sure, our buddy Tony, from Soldotna, stopped by once, but he was in town to visit his sister. And I saw a former student named Clancy in the Dillingham Post Office one summer day, but he was heading out to go commercial fishing.
And that was i t— in three years.

I offered to pay the way for either my son or daughter to visit. They were either too busy — understandable — or lacked the requisite enthusiasm for the adventure.

I tried to convince my 80-year-old mother to visit. "Where would I stay?" she asked me over the telephone. I told her that Yvonne and I would give up our bed so she could be comfortable. "Oh, I don't want you to do that," she said. "I could stay at a hotel. Do they have hotels in Dillingham?" I assured her that there were bed-and-breakfast places available and the Bristol Inn almost always had extra rooms.

"Would I have to fly there?" Yes, I said. PenAir had at least two flights a day, as did Alaska Airlines during the summer months. "It'd be fun, Mom. You're always saying you don't see me often enough." I thought I had her. At least she was thinking about it.
Then: "What would I do while I'm there?"
"Uh, well, you'd be able to visit with me and Yvonne."

Although Dillingham is a launch point for fishermen, hunters and other outdoor enthusiasts, it comes up short on other forms of entertainment. For my mother, bushwhacking the Nushagak outback was out of the question. Trivia at the bar would be too raunchy and kill only a couple of hours. The city of Dillingham contains only a handful of restaurants (most open sporadically), and a driving tour of town would be short-lived. Kanakanak Beach would be cold and inhospitable to my elderly mom.

Back in the 1970s, she used to enjoy watching high school basketball because she knew so many people in Soldotna and Kenai, but watching a bunch of strangers' kids play at the Dillingham school just wouldn't be the same. I think Mom would have enjoyed the festivities during Beaver Roundup in February, and she'd have liked meeting many of the great people who live in Dillingham. But I had to admit that it was less problematic for me to fly to Soldotna to see her.

Then everything changed. We've been in Homer for two Thanksgivings so far, and Mom has come here for both of them. My son has visited once, my daughter a number of times. Stephanie has driven down often, as have friends from as far north as Willow. We have two guest rooms and have filled them both on occasion.
And no one gripes about having nothing to do.

Restaurants and good food are plentiful. Visitors can shop along Pioneer Street or out on the Spit. Some folks charter fishing trips. We've taken water taxis to go hiking in Kachemak Bay State Park and a ferry to Seldovia for the Fourth of July. We've taken people tidepooling and beachcombing at Bishops Beach, played trivia at Alice's Champagne Palace, and cross-country skied out at McNeil Canyon.

Frankly, after growing up on the central peninsula, I was relieved while living in Dillingham not to be plagued by motor homes and busy campgrounds —Dillingham has no campgrounds — and many folks there enjoy being untethered to the road system. But people over here seem to enjoy the tether and have no problem riding the asphalt ribbon right to our door.

If we owned — rather than rented — our house, we might have to consider adding on.

Clark Fair of Homer has been an Alaska resident for more than 50 years.