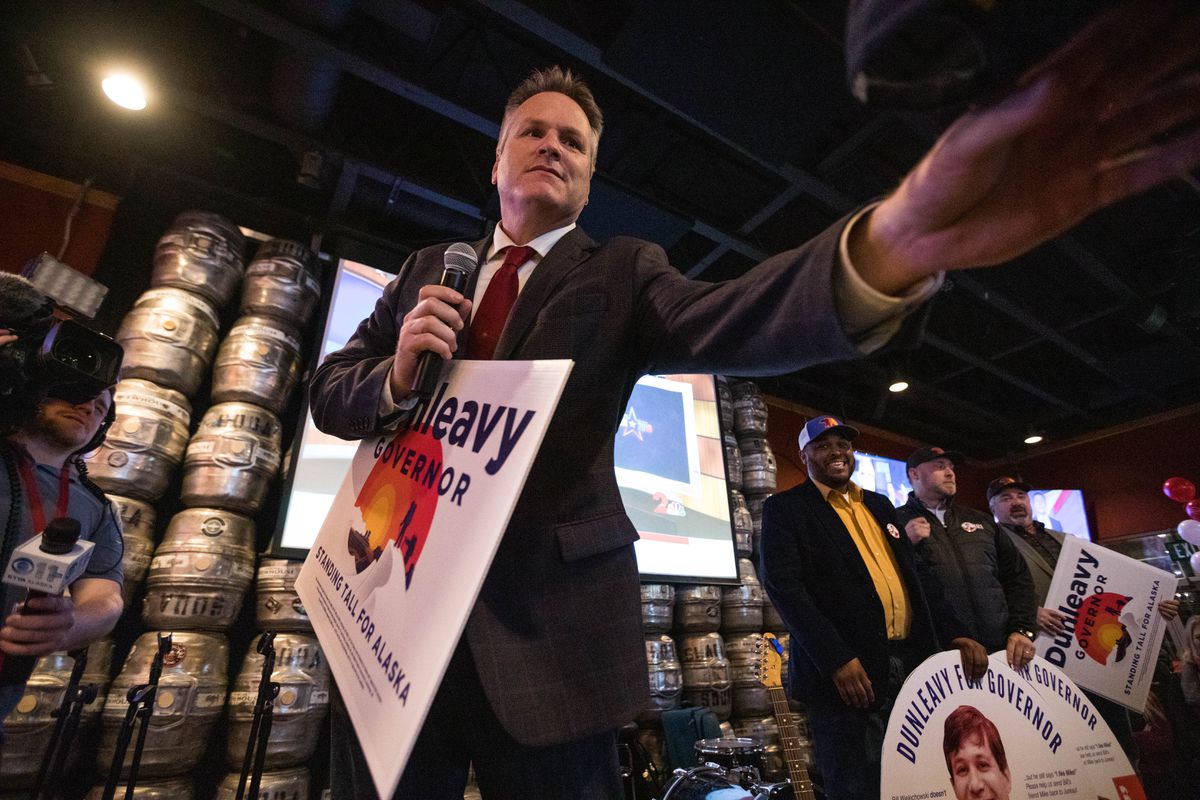 Mike Dunleavy reaches for a campaign hat during a speech thanking an independent expenditure group that supported his gubernatorial candidacy, at a Republican Party celebration Tuesday, Nov. 6, 2018 at the Anchorage Alehouse. (Loren Holmes / ADN)

Mike Dunleavy reaches for a campaign hat during a speech thanking an independent expenditure group that supported his gubernatorial candidacy, at a Republican Party celebration Tuesday, Nov. 6, 2018 at the Anchorage Alehouse. (Loren Holmes / ADN)

Sometimes the choice in an election is clear. The two candidates look different and present different visions. The campaign noise can't obscure that.

At those times, the results tell you what the voters really want.

In Alaska's choice of Mike Dunleavy for governor, voters told us they want their full Alaska Permanent Fund dividends back.

And that's a problem.

Republicans will be running things. But their mandate has taken away the tools they need to govern. Alaska still has a substantial deficit, and increasing dividends will make it bigger. Dunleavy ruled out the other options to raise money.

[Dunleavy on track to become next Alaska governor]

Republicans took control of the Alaska state House, and the Senate is in play. With the loss of two independents who caucused with the Democrats, Rep. Paul Seaton of Homer and Rep. Jason Grenn of West Anchorage, the House coalition died.

Both had supported a fiscal plan including lower dividends.

Two years ago, the coalition came into power after primary and general elections that punished legislators who wouldn't take chances on dealing with the fiscal crisis. Democrats and progressive independents took office committed to a balanced fiscal plan, with taxes and dividend cuts.

The Republican Senate refused to consider taxes. The solution the Legislature achieved, with the support of both parties and Gov. Bill Walker, contained a dividend cut. They also cut the budget and reduced oil tax credits. But no taxes.

But the oil tax credits were too complicated for most people to pay attention to. And the budget cuts contributed to a crime wave, as Alaska State Troopers and prosecutors were laid off. I could put the Senate Bill 91 justice reform law in that category, too, as it was intended to save money and was blamed for everything bad under the sun.

As much damage as they did, however, the cuts were not enough. For some people, no budget cut is ever enough. If you don't want to pay taxes, you can always say you prefer more cuts.

On a great night for Republicans, even Republican candidates who voted to cut dividends lost some support, said Tuckerman Babcock (then party chair and now Dunleavy's chief of staff)— although those he cited still won.

"Solving it by just taking the dividend is a no," Babcock said.

But would the fiscal plan have been more popular if it came with broad-based taxes, increased oil taxes and drastic budget cuts? I doubt adding more unpopular policies to a dividend cut would have made it any more popular.

Dunleavy said the voters were concerned about the dividend, public safety and, "What is the future of Alaska."

I asked if his vision of the future was optimistic — for more resource wealth — because I can't see a bright future based on just doing less of what we've been doing, but with bigger dividends.

Dunleavy instead said the future was about the state doing a better job with what it has before asking for more money.

I know too much about all this, so I can't really enjoy what's going on, even if I do get a bigger dividend. The future I see is one of further austerity for teachers, cops and the state mental hospital, while we continue to spend down savings. It's a dim future.

But my point of view lost Tuesday. Alaska has chosen a direction.

And that got me thinking about how we make these choices. As I said, I know too much. But most of us don't study the budget for a living. How do we choose?

I think we vote for people who we believe are like us. That's the other part of Dunleavy's victory.

Mark Begich also promised a bigger dividend. Signs all over Anchorage tried to throw doubt on Dunleavy as the true dividend savior.

Alyse Galvin ran an amazing campaign for U.S. House, the likes of which Alaska has rarely seen. Rep. Don Young seemed uninterested and his campaign moribund.

Young won handily. He didn't have a party, as far as I know. But more Alaskans identify with him. They know who he is. He's conservative and that's enough.

I visited celebrations for the Republicans and for Begich, too. If you didn't know the political party of these gatherings, you wouldn't have any trouble figuring it out just by the haircuts, the clothes and the ages of the people present.

Americans nationally voted their identities. The red and blue maps have became even more clearly divided. Now we've gotten to the point that Democrats and Republicans live different lives — urban or rural, young or old, white or minority. They have their own music and their own news.

In polls, folks say they wouldn't want their kid to date a member of the other party.

Begich may have made a similar dividend promise as Dunleavy, but Dunleavy looks like someone who wants a big dividend and a small budget. And he has an R after his name.

I expect the Republicans to do what they said. Holding all the reins of power, and having run on such a clear and simple platform, they would have a hard time doing otherwise and going back to the voters.

So voters will get what they wanted. Bigger dividends.

I don't believe cuts will cover much of that, if any at all. Instead, we will use more state savings. Maybe the Permanent Fund earnings will run dry.

Other than the dividend, I think a lot of things could get worse.