Anchorage’s ornery, anti-government history and the earthquakes that don’t care 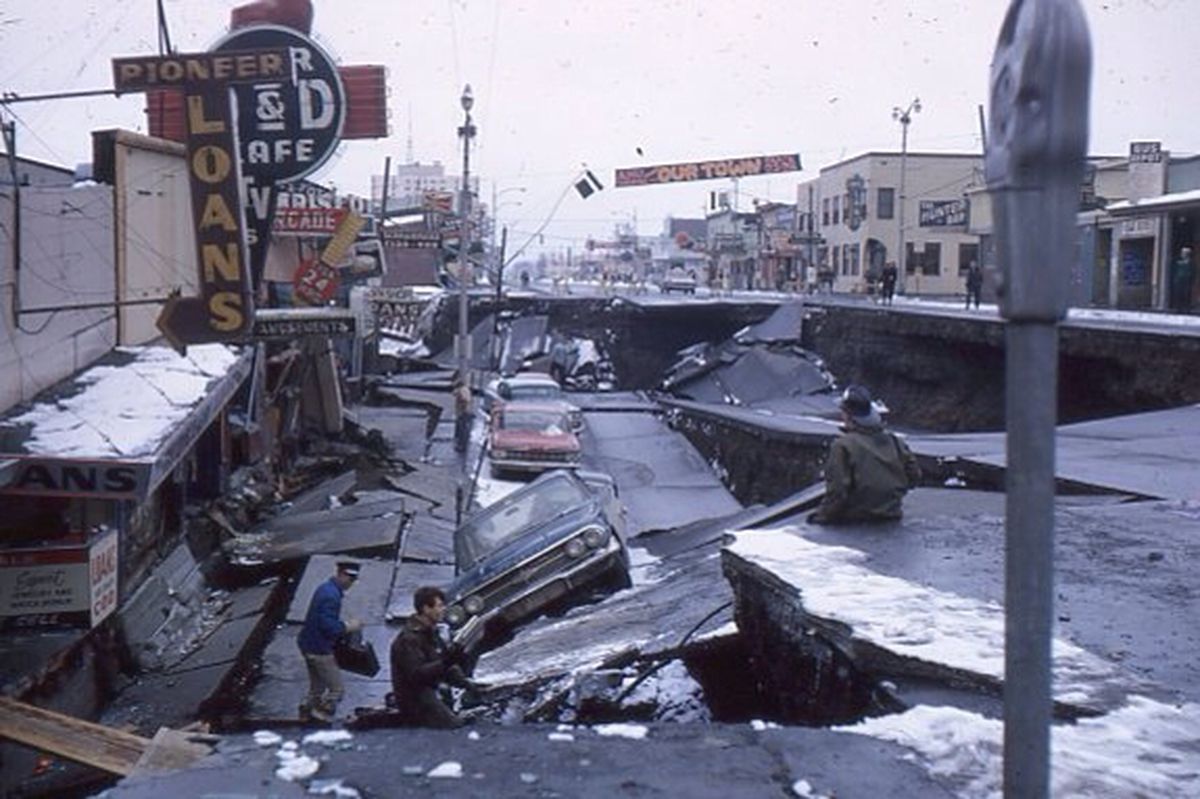 The 1964 earthquake heavily damaged much of Anchorage, Alaska. (Harvey Chafitz)

The 1964 earthquake heavily damaged much of Anchorage, Alaska. (Harvey Chafitz)

Lucy Whitehead ran out of the Empress movie theater during Anchorage’s first big earthquake, in September 1932.

Fourth Avenue moved like ocean waves. Chimneys cracked. A display case collapsed in the Loussac drug store. In one of the many aftershocks, a jar fell off a shelf and hit Whitehead’s mother.

A scary quake hit in 1940 as well. A huge quake in October 1954 damaged many buildings, including the airport. The March 1964 earthquake was among the largest ever measured. Whitehead keeps some broken dishes and newspapers from that one in her room at the Anchorage Pioneer Home.

On the morning of Nov. 30, Whitehead had just gotten in the elevator, alone, when it began violently shaking. She grabbed a railing.

Two days later, her muscles still hurt from the strain of holding on. Two weeks later, she cried while telling the story.

“I was in darkness,” she said. “To tell you the truth, I thought I had had it. I started praying.”

But the earthquake stopped. The elevator went down and the doors opened. Staff cleaned up her room before she went back upstairs. Heat was back on that evening.

Anchorage still has residents, like the charming Lucy Whitehead, who have lived here all but a few years of the city’s existence. In her case, she remembers that history and saved wonderful records. I looked up that 1932 earthquake — her memory was off by one hour.

We live in a good spot for a city in most ways. We’re here because we have flat ground for runways, access to the ocean, and mountain passes leading to the north and south. Anchorage is a transportation and service hub.

But the city was built on shaky ground with an ornery population resistant to government. We’re still learning the value of working together and listening to experts to live safely on this uncertain soil.

Anchorage dates its birth to 1915, when a railroad construction camp sprung up on Ship Creek. But city government didn’t start until 1920.

The federal government built and ran Anchorage during Alaska Railroad construction. Residents liked it that way: no taxes. Only when federal officials threatened to shut down the fire department did voters relent and form a city.

Whitehead was born here in 1923. When the quake hit, in 1932, the town was just a few unpaved streets of wood buildings.

Anchorage became a real city with federal spending in World War II and the Cold War. Seeing that growth, the U.S. Geological Survey dispatched scientists to study the soils in the 1950s.

What they found worried them. Much of Anchorage rested on a layer the geologists called Bootlegger Cove clay. Lab tests showed the clay was weak and in field observations it sloughed on slopes.

In the 1954 quake, the clay let go under a stretch of Alaska Railroad track 9 miles south of Anchorage, leaving rails 20 feet in the air. Officials speculated repairs could run as high as “a few thousand dollars.”

A 1959 USGS report mapped the city’s most dangerous areas (the online version excludes the maps). But local government ignored the report and building continued without regard to the warning. In March 1964, slopes collapsed where the geologists had predicted, taking down homes and killing residents.

After that quake, geologists called for evacuating and abandoning Turnagain and the L Street area. Residents wondered if Congress would relocate Anchorage, as it did Valdez.

But business leaders defended their investments. The city formed a business-oriented Reconstruction Commission that ignored most of the experts’ advice. Anchorage ultimately refused some federal assistance that would have come with safety requirements costly to wealthy land owners.

The Anchorage Times did its part. Its owner, Bob Atwood, was married into the Rasmuson family, owners of the state’s largest bank. The Times changed its reporting three days after the quake, switching from disaster coverage to cheerleading for investment and rebuilding.

The city’s most dynamic developer, Walter Hickel, had consolidated land downtown for a big new hotel, including Lucy Whitehead’s house. She hadn’t wanted to sell, but finally relented. Then the earthquake sliced Hickel’s property with a huge crevice.

He decided to build anyway. He often said his decision to build the Hotel Captain Cook in 1964 was intended to restore confidence in the city’s future. But he also had been planning the hotel for years and had sunk a lot of money in the project.

Outside the city limits — on the south, Northern Lights Boulevard — local government arrived only three months before the 1964 quake hit.

Residents hadn’t wanted to tax themselves for a borough or obey new rules. When someone had a problem with a neighbor or wanted their child to switch schools, they called Gov. Bill Egan.

He got tired of those calls and in 1963 signed a law to force creation of boroughs. Later that year, Anchorage voters turned down a borough by a 3-1 margin. In January, 1964, the new law created the Greater Anchorage Area Borough anyway.

Still, the fight went on. The Eagle River-Chugiak Area seceded from the borough in the 1970s. During a fight to unify the borough and the city, a judge forced the area back in. At a meeting to discuss unification plans in 1975, Eagle River residents showed up with guns and lawsuits.

Unification finally passed, after a decade of conflict, only with a promise that less-developed areas could opt out of some services, such as police patrols or parks. Eagle River still remains outside the Building Safety Service Area, exempting the area from enforcement of codes.

These old fights seem weird today. As weird as the incident, in 1970, at a hotel on the south side of Northern Lights, a fire trap built in an area without codes. When the hotel burned, Anchorage city fire trucks stopped on the north side of the road. It was outside the fire service area. Five people died.

It is time to finish with that history. Earthquakes don’t care where these lines are. We are one city and we should have one set of codes and services.