They receive a profound gift from those who have nothing 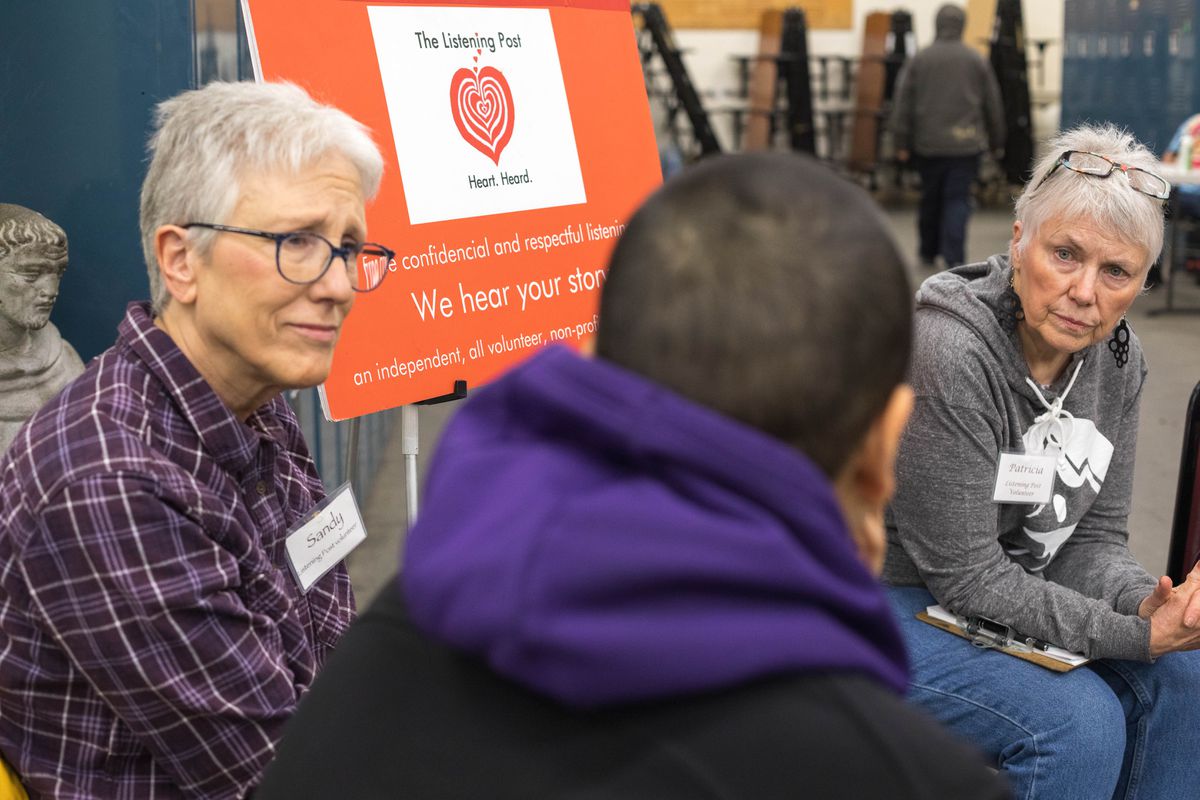 Volunteers Sandy Morris, left, and Patricia Kennish listen to a client at the listening post at Brother Francis Shelter on Tuesday. The volunteers, who are not counselors, sit and listen to people who need to talk. (Loren Holmes / ADN)

Volunteers Sandy Morris, left, and Patricia Kennish listen to a client at the listening post at Brother Francis Shelter on Tuesday. The volunteers, who are not counselors, sit and listen to people who need to talk. (Loren Holmes / ADN)

What can you get from homeless people loitering at the Brother Francis Shelter? Maybe something you can’t get anywhere else.

“What we see is inebriation and mental illness,” said Sandy Morris, a retired school nurse, sitting in the shelter lobby. She was waiting for someone to sit down and talk to her, a volunteer with the Listening Post, a group that simply listens to others’ problems and stories.

“I think I do it for myself,” Morris said. “I learn from folks here. A lot of people believe in God and feel like God is with them.”

The streets of an Alaska winter can inflict unimaginable suffering. The homeless typically don’t survive many years there. Every month some die on the ground of the cold or their addictions, get hit by cars or killed in assaults.

But Morris and her Listening Post friends said the hardcore homeless tell them stories of God directly intervening to help them.

“I struggle with believing things like that, so to hear them, in these circumstances, have faith in miracles helps me,” Morris said. “If I ever did believe in a traditional God, it would be because of what I hear here.”

Patricia Kennish, sitting at Morris’ side, said a woman told of nearly freezing to death in the woods when Jesus came to her and guided her. He stayed three days, the woman said, until he told her someone else needed him more.

“You come to realize how much God has blessed you, and you can talk about it, but the experience these folks have, they know God has been with them. They know they would not have made it,” said Kennish, a retired children’s librarian and committed Catholic.

“It has sustained them through a lot of tragedy and sadness. They’ll quote Scripture and have a knowledge of God that I have never had, because I have never had that need. I’ve never been that low,” she said.

[How strangers rescued an elderly homeless woman and sent her home]

It’s easy to hate the homeless. I’ve been disgusted by the filth and immorality I’ve seen. But in the last three years of writing this column, I’ve talked to enough street people to understand their helplessness.

Many are seriously mentally ill. Most live under the burden of terrible trauma. Some who started out cognitively whole never will be again after years of substance abuse. For such broken people, Anchorage sidewalks and greenbelts are a maze without an exit.

I don’t meet their eyes when they ask me for money. Hardly anyone does.

Being homeless is lonely, even when surrounded by people. The folks standing around the shelter often stand in silence. It takes attitude to stay safe on the streets. If you linger with them, you hear disjointed bravado and senseless redundancy, but not much connection.

On Tuesday afternoon, a drunken woman waved her arms and shouted obscenities a few feet from Morris and Kennish. They ignored her and concentrated on their conversations.

The elder ladies with short haircuts stuck out, but shelter guests are used to them.

Some sit down and pour out their troubles. Their losses of children, of home, of health. Some have lost connection to reality and spin delusional tales. Others just share their days, as you might tell a spouse in the evening what you did while apart.

Les Haskins, trying to find his footing after getting out of prison in April, wanted to talk about the Nov. 30 earthquake. Early in a conversation, he worked in his time sober and his reliance on the Lord’s Prayer.

Haskins said he checks in with the Listening Post ladies because its hard to have a social life sober on the streets. Like a lot of former addicts and convicts I’ve met, he talked frankly about his failures.

“It’s painful to me — it’s humbling — when they apologize to me,” Kennish said. “I wish they would value themselves.”

After years of afternoons at the shelter, she recognizes people she knows on the side of the road. She smiles and sometimes gives food and clothing. She checks for their names when the newspaper reports the dead in camps, on the road, or the murdered bodies that turn up.

Marcia Wakeland, who co-founded Anchorage’s all-volunteer Listening Post a decade ago, said the population at the shelter has changed as the city offers “housing first” apartments to the homeless. Those who remain tend to be the most troubled.

The Listening Post started at the Anchorage’s downtown transit center after Wakeland and a friend learned about the concept at a conference in Vancouver, B.C.

[Listening Post is ‘here to be present and loving’]

Wakeland was pastor of Central Lutheran Church, which had for many years served the homeless by sharing its building, bathrooms and a phone. Those guests affected her.

“What they taught me about church was amazing,” she said. “What I was really interested in is the church beyond how we have traditionally defined it.”

The transit center has closed, but 35 Listening Post volunteers continued with quiet, non-judgmental listening at sites around the city. Wakeland has passed on the idea on to 13 other communities around the world.

“It’s been interesting to me about how the idea, it’s rising. It’s something rising up,” Wakeland said.

I said that reminded me of the early Christian church, with these volunteers, without money or support, rapidly spreading a simple idea — to serve, with mere presence and listening, those poor in spirit, those who mourn, the meek.

“It’s part of the real relationship, really relating to other people, that keeps the volunteers there. It’s that contact and connection that keeps them coming, just like the early church,” she agreed.

Something happens out on the streets, in the hardship, that doesn’t touch us in our warm homes. Those who have nothing come to possess a gift, which the volunteers accept gratefully.

“I guess I would have assumed that people would lose faith in their position, but it’s just the opposite,” Morris said.

Kennish agreed, “It makes me see the power of faith.”