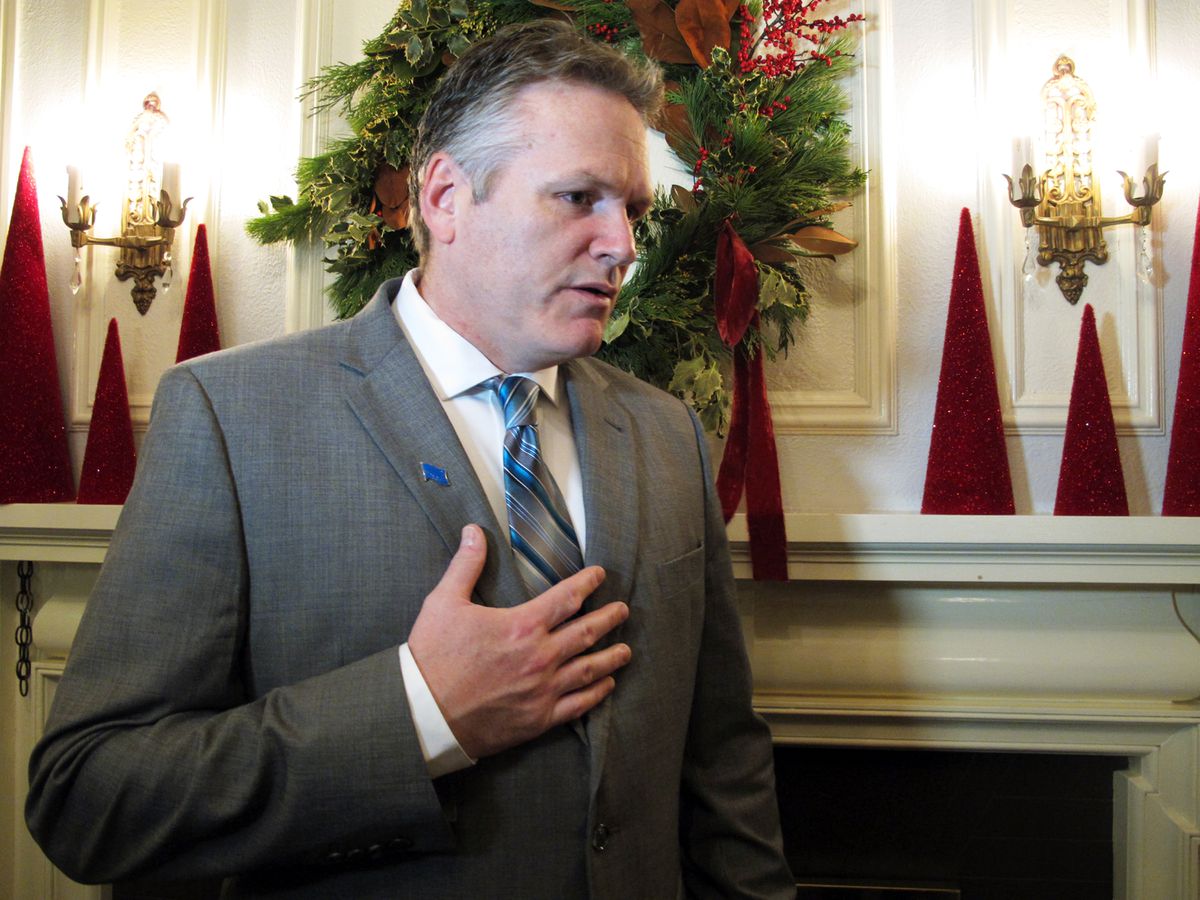 Alaska Gov. Mike Dunleavy answers a reporter's question before the start of a holiday open house at the governor's mansion on Tuesday, Dec. 11, 2018, in Juneau. (AP Photo/Becky Bohrer)

Alaska Gov. Mike Dunleavy answers a reporter's question before the start of a holiday open house at the governor's mansion on Tuesday, Dec. 11, 2018, in Juneau. (AP Photo/Becky Bohrer)

When former Gov. Bill Walker swooped into the weekly Anchorage Chamber of Commerce luncheon on Nov. 26 the only thing he forgot was a “Mission Accomplished” banner.

A week before leaving office, Walker revealed the budget he planned to hand off to incoming Gov. Michael J. Dunleavy (who has traded Mike for Michael J. on official communications since taking office).

Walker and his budget director Pat Pitney, since replaced by Donna Arduin, declared the budget for the next fiscal year “balanced” and former Revenue Commissioner Sheldon Fisher promised a “surplus” for the current fiscal year.

That’s a stark change from the picture legislators faced last session when the projected deficit for the current year would be about $700 million at a price of $63 per barrel.

To be sure, for the first three months of the fiscal year Alaska appeared to be heading that direction as prices rose to steadily hold at more than $70 per barrel and better — peaking at $85.36 on Oct. 3 — to hit what would be the break-even point for the $700 million deficit.

But prices have been on a rapid decent since, dropping more than $5 per barrel in the week after the Nov. 6 election and hitting a new low for the year of less than $60 on Dec. 17.

On Nov. 21, just days before Walker would present his “balanced” budget using $75 per barrel, Alaska North Slope crude was selling for $64.82.

OPEC has announced plans to cut production by 1.2 million barrels per day in January; and Saudi Arabia has told U.S. refiners to expect fewer cargoes as well as the petro kingdom attempts to force down stockpiles and raise prices that way.

Those actions may well force the price back up, but U.S. shale drillers have adapted since prices crashed in 2014-15 and won’t have to shut in nearly as many high-cost wells as they did last time.

There is also some evidence of softening global demand that may also offset whatever moves OPEC attempts to raise prices.

In any case, after four years of being overly conservative on price and production forecasts — which in turn widened projected deficits as Walker and allies in the Legislature from both parties pushed to use Permanent Fund earnings or institute an income tax or raise oil taxes — it seems a bit fishy that the former governor would declare a budget balanced based on a price per barrel that few believe is realistic.

There isn’t a lot an incoming administration can do to alter a budget inherited from the prior administration, but a simple calculation is changing the expected price per barrel.

The other simple change a new administration can make is the size of the Permanent Fund Dividend, which Dunleavy also did in accordance with his campaign promise to follow the statutory formula that has been disregarded for the past three years through Walker’s veto in 2016 and the Legislature’s ad hoc setting of amounts in 2017 and 2018.

The more realistic price per barrel and the statutory-funded dividend combined to shift Walker’s “balanced” budget to one with a $1.6 billion deficit.

Setting aside Dunleavy’s pledge to pay back the shorted amount from the past three years, or roughly $3,300 per person, his first budget is a cold dose of reality for the incoming Legislature that, unlike Walker’s claims, we are far from out of the woods fiscally.

The fact is prices are dropping and could very well bump along at $60 or less for the next couple years. It is also a fact that the statutory formula remains on the books and the PFD debate is not going away as long as there is a governor who is committed to following the law regardless of the Supreme Court decision that he or the Legislature can set it at any number they wish.

After ducking the issue for years, it is long past time for the Legislature to either follow the formula or change it. If its members don’t believe that $3,000 PFDs are sustainable while the state is in the red, then adopt a formula that is.

Hoping that oil prices go up or ignoring the law and hoping people forget is not a sustainable solution, either.