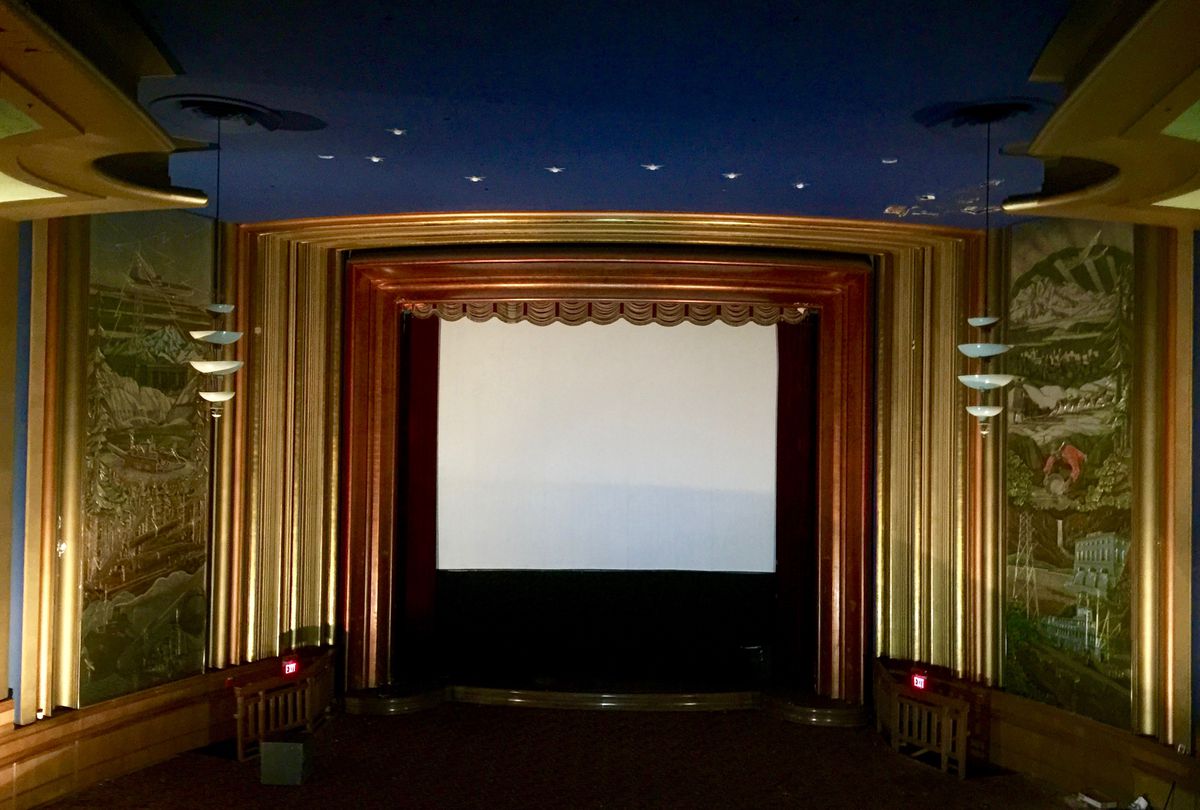 The interior of the 4th Avenue Theatre appears to be in fairly good shape in May, 2015. (Ira Perman)

The interior of the 4th Avenue Theatre appears to be in fairly good shape in May, 2015. (Ira Perman)

Captain A.E. Lathrop built the 4th Avenue Theatre as a symbol of pride in Alaska and hope for the future. At this moment in our history, its survival will test whether we still hold that pride and hope.

In the 1940s, Anchorage was a dusty little town of small wood houses and unpaved streets. As a business proposition, it was nuts to spend $1 million on a concrete movie palace, using the nation’s best designers and artists to pack the building with dark paneling, bas relief murals and golden trim.

Experts say the theater is the most important historic structure in Southcentral Alaska. The extraordinary built-in artwork of the interior — not individual pieces, but the unified whole — is the most aesthetically interesting and impressive in the state. (The exterior is comparatively boring.)

Lathrop didn’t do it to make money. He had compiled a fortune in mining and industry. The theater was a statement.

The permanence of the city was seriously in doubt before the construction, using concrete, of the theater and the 1941 federal building across the street, as The Anchorage Times editorialized at the time.

Many other Alaska boomtowns had come and gone. Some residents believed Anchorage would be one more. But after these investments, the paper said, people started putting concrete foundations under their homes.

On Memorial Day weekend of 1947, thousands of residents toured the new theater, agog at its splendor. The Times editorialized that the moment would always be regarded as one of the most important in the city’s history.

“Captain Lathrop by investing his money in the 4th Avenue theater, has shown his conviction that Anchorage has a brilliant future and his business is more than a ‘boom’ proposition,” the Times wrote.

The theater closed 40 years later, along with single-screen movie houses all over the U.S. Malls and strip development killed downtowns in cities large and small. Anchorage’s downtown declined, becoming mostly a tourist area, but without much for tourists to look at.

In 1991, a nostalgic businessman restored the building and operated it as an event space and tourist attraction, which he claimed made money, but he lost it to foreclosure after another investment went bad.

A real estate company called Peach Investments bought the building in 2009 and worked on consolidating other properties on the block. In 2015, Peach announced plans for a development on the land, expecting to save only a few pieces of artwork from inside. But that project stalled.

Peach renewed a demolition permit on the building this month, telling a reporter it needs inspection due to the Nov. 30 earthquake and remediation of hazardous materials in the walls, floors and ceilings.

Terence Chang, a member of the family that owns Peach Investments, renewed the concept of saving individual pieces of art from inside the building. History experts say the entire public area of the interior is integral to the building’s historic value, not just pieces.

I worried the building would be gutted, and Chang wouldn’t answer my questions. Instead, architect Larry Cash issued a statement saying, “The owners have no immediate plans to destroy the historic fabric of the 4th Avenue Theatre Building.”

Cash said he was speaking for the family as a friend. He isn’t working for Peach. He has also been involved with a preservation group, Friends of the 4th Avenue Theatre

It’s easy to vilify Peach Investments, but unproductive. The situation says much more about where Alaska is today compared to 1947.

The community had two good chances to save the building 12 years ago. The voters turned down a small bond issue and the Anchorage Assembly turned down a plan that would have cost the city nothing.

Meanwhile, other cities around the country pitched in to save historic buildings and renew downtown areas. Historic downtowns work. That’s old news. You can see them many places, where decay is long forgotten and residents walk old sidewalks to trendy shops and brewpubs.

The 4th Avenue could be the heart of such an area. Why can’t we seem to manage what other cities have done?

The theater comes from a time when newcomers arrived in Alaska with intense optimism. The government didn’t send out checks to everyone. Communities contributed taxes and donations for the improvements they wanted to build.

Today, we build things when oil prices are high. The rest of the time, the government hunkers down like a pensioner watching investments. The main political debate of the moment is whether to cash out part of our Alaska Permanent Fund for dividends or to pay bills.

Saving the theater would be a statement to renew Alaska. The steps are not hard to see.

First, we must recognize this as a community responsibility. The building will not be saved without compensating the owner. Cash pointed out that Peach Investments has held the property for almost 10 years and kept it intact, at great cost. The family cannot be expected to wait forever.

Next, a person with weight in the community must take a solid idea directly to the owners. I talked to plenty of potential leaders over the last week. They all called for someone else to step forward. Who will be the hero?

If a total development plan isn’t ready, as seems likely, the owner could sell a historic easement covering the theater and lobby space, receiving compensation in exchange for a legal duty to preserve that area within whatever project finally is constructed.

Or Peach could sell the building but keep air rights overhead, constructing its project around the theater.

Finally, the community must contribute. This will cost money. And it should.

The building represents belief in Anchorage. Being part of saving it will do us good, for ourselves even more than for our history. We need that optimism again.