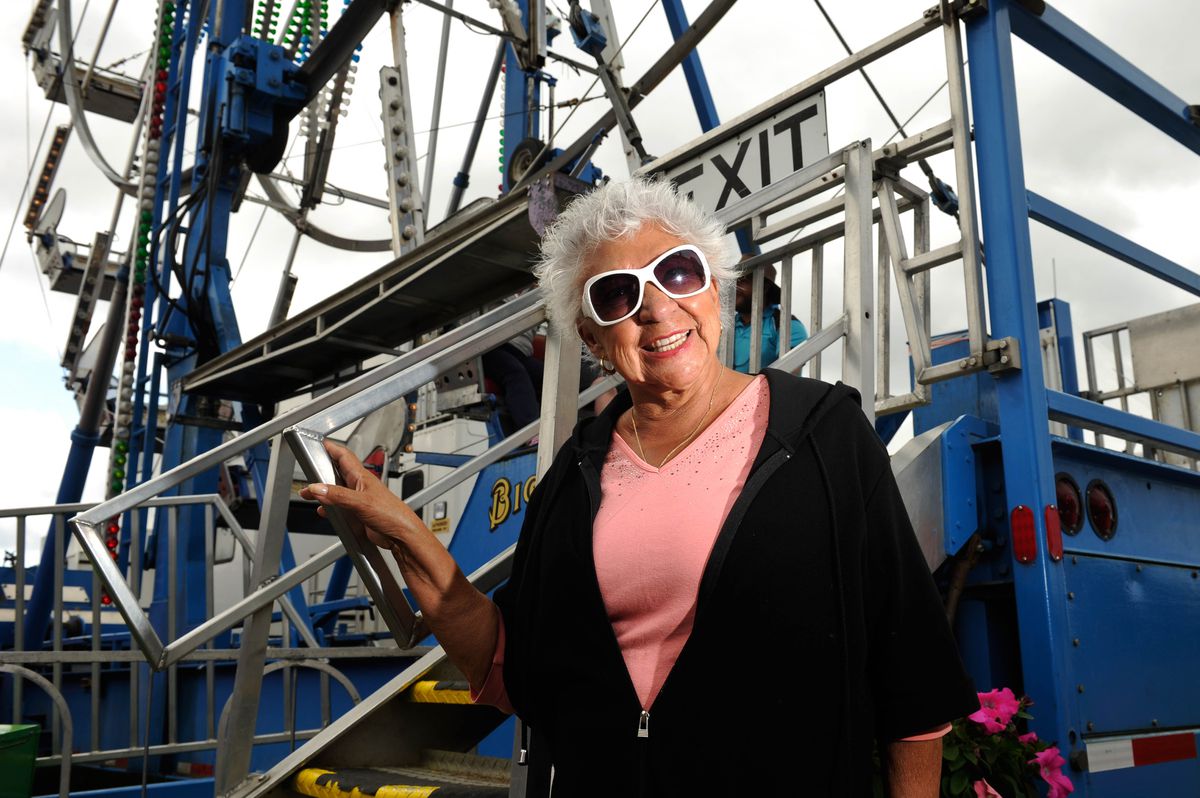 Running off with a carnival turned out to be a good decision for Claire Morton, despite what her family said.

“You can’t be serious. No young, respectable girl goes running off with the carnival,” she recalled them saying, in a 1987 interview. “They didn’t think too highly of them, those respectable citizens who lived in town.”

But even as a young woman in the 1950s, Morton always made her own decisions. And carnival life turned out better than anyone could have expected.

Her perseverance and hard work made her Alaska’s carnival queen. She built Golden Wheel Amusements, with rides anchoring the Alaska State Fair, Anchorage’s Fur Rendezvous festival, the Kodiak Crab Festival and other celebrations, starting in 1967.

In one of the many articles written about her over the years, she supposed her carnival was the only one in America to have operated at temperatures well below zero.

Mike Szymanski called to tell me about her death. He said her determination and decisiveness lasted to the end.

“She was tough to the point where I wonder if I will ever have the courage to do what she did,” Szymanski said. “She insisted at the end she didn’t want chemo or radiation. It came on pretty quick, getting the cancer, but she told the doctors, the family and me, that I’ve lived a good life, I’ve had a lot of fun, and I’m not going out the door with chemo and a lot puking and everything.”

You don’t make it as a woman carnival operator in 1970s Alaska without being tough. But Morton was also known for hiring anyone who needed help — any ex-con except sex offenders — and would reach out to a sad kid on the midway.

“She could tell they were a little short on money,” Szymanski said. “She would just reach over there and hand them some cotton candy, or put them on a ride. Because she always said, ‘I don’t ever want to see a kid not having fun at a carnival.’”

Morton came from extreme poverty, a family of nine children with a mother who was often sick, in Saskatchewan of the Great Depression. She began working at 9 scrubbing floors and left home at 16.

She joined a carnival at 21, after meeting a guy making enough money at one to own a convertible.

She first visited Alaska with her husband years later to bring back a piece of carnival equipment she had bought. The local carnival operator had gone bankrupt. Fur Rondy organizers begged the couple to stay to put on that year’s show.

They agreed. And after seeing the attendance, they decided to stay. If that many people came on cold February days, what would summer be like?

Morton’s daughter, Cathy Morton, remembers how the business grew. She and her sister, Jacqueline Leavitt, who now owns the company, started making cotton candy and popcorn before they could see over the counter.

Claire kept at it after her marriage broke up, avoiding debt and rolling profits back into the business. She lived in a camper with the girls. Cathy said they didn’t have a house until she was in middle school.

Morton knew how every ride worked and, Szymanski said, stealing from her was very hard to do.

“She knew if someone was skimming,” he said. “I’d watch her and say, ‘How the hell did you know that?’ And she said, ‘I’ve been watching this since the first dime was thrown in the dime pitch. I know what it should be.'”

Rosie Szymanski, Mike’s sister, said Morton was a good judge of people. You learn to be one as a carney. She knows, because she ran away to the carnival too.

In 1968, Rosie had just graduated from East High School when she met a guy at Morton’s carnival and decided to take off with him.

The Szymanskis grew up in tough circumstances. As a teen, Rosie had been working, paying rent on a Fairview apartment, and taking care of her father, an alcoholic since his service in the Pacific in World War II.

“My dad had just passed away, and I said, ‘There’s got to be more to this life than Anchorage,’ ” she said.

Listening to Rosie Szymanski’s stories, I could imagine how Morton developed her business skills. Szymanski had a five-year education behind the plank of a carnival balloon and dart game, learning to pull in people, work them and take their money.

She married Dick Spellman, a friend and business associate of Morton’s, who owned carnival games, called a joint. But she finally quit the carney life, with its special language, intense hard work and the family feeling among the workers, because she didn’t like seeing people as marks.

Later, Rosie Szymanski worked a couple of years for Morton’s joint at the fair. She enjoyed Morton and her family, but at 40 the work was too hard.

“As a person, she was absolutely a lovely lady, and would take care of you as long as you’d take care of her,” Szymanski said. “Boy, did she bring a lot to Alaska. A lot of kids, that was their first job. And boy, you had to work, if you worked for Claire.”

Morton’s story is uniquely Alaskan. It’s about grit and brains.

It starts with that first ride she bought with her husband, the Octopus. The price was low, but the cost of shipping it out of Alaska would be high.

That issue made the business.

By learning to move a carnival on ferries, over icy roads and in all kinds of weather, and doing it well, Morton had an unbeatable advantage over potential competition.

Fifteen years ago, the state fair tried to bargain her down by offering the carnival concession to other companies from outside the state. But the strategy failed. The cost of coming here was too expensive.

As unlikely as it may have seemed, running away with the carnival — all the way to Alaska — was a very smart move.