Dunleavy means to keep his promise to liquidate Alaska’s government 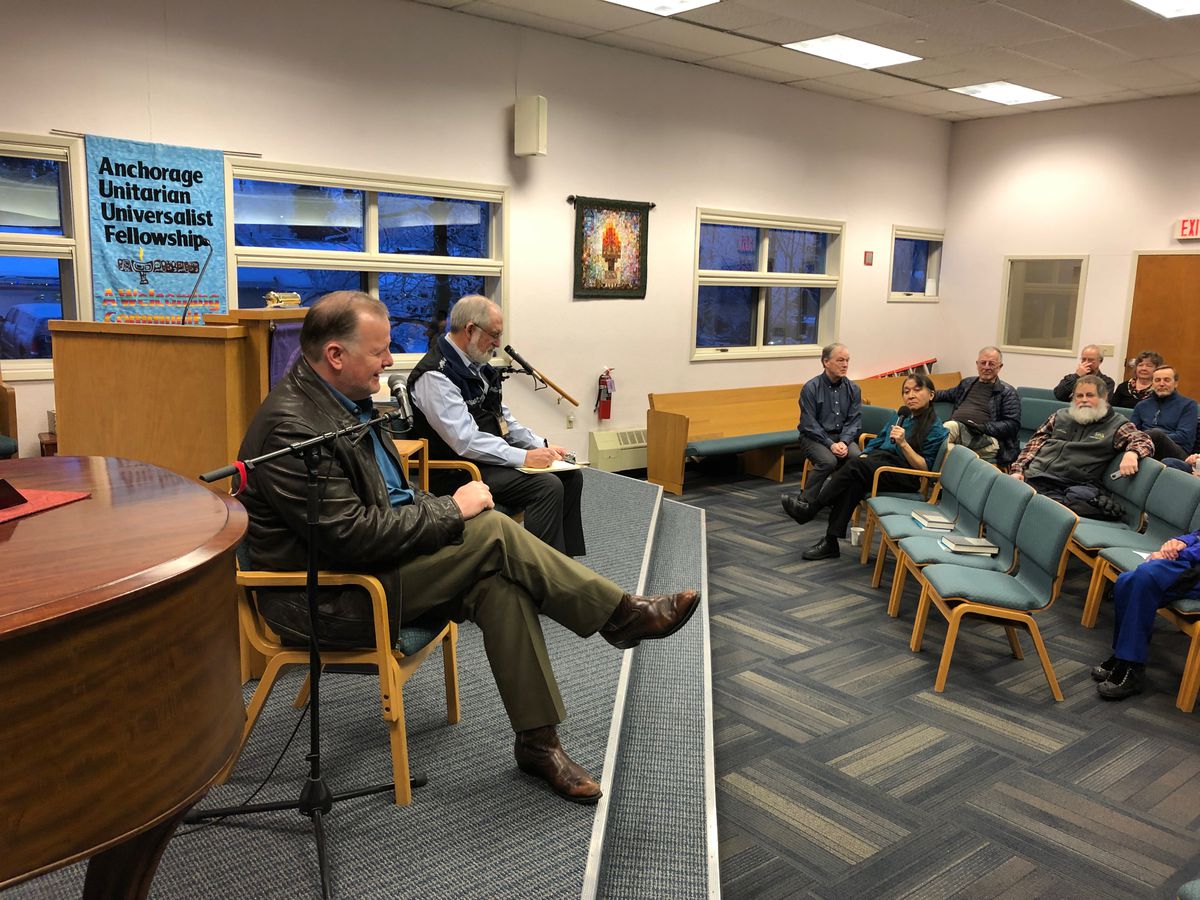 Gov. Mike Dunleavy plans to keep all his campaign promises, and that is a terrifying prospect for anyone who cares about Alaskans’ health, education or economy.

The new administration has been opaque so far, by design. Dunleavy will make few public appearances as governor, said his chief of staff, Tuckerman Babcock, who spoke to the Anchorage Unitarian Universalist Fellowship Sunday morning.

But Babcock himself gave the clearest read yet on what the administration will do, including cutting $1.5 billion from the state’s budget.

“He wants to do exactly what he said he would do in the campaign,” Babcock said. “There are a lot of people in Alaska who aren’t going to like what he promised to do.”

That’s putting it mildly. Cutting the state’s undesignated general fund budget from $4.7 billion to $3.2 billion, as Babcock said the governor intends, would transform life in Alaska.

Babcock made several substantive policy statements. Dunleavy will make violence against women and sexual abuse of children his highest priority. He will not try to overrule Anchorage’s transgender equal rights ordinance.

And he will try to cut the way out of Alaska’s fiscal crisis. Experts have said that was impossible. What they meant is it would destroy the state. The entire payroll from the undesignated general fund is about $1.2 billion, so you could fire every state worker and not cut enough.

Look at the numbers and see what you think.

I’ll leave aside federal money that flows through the state government, because cutting that saves Alaska nothing. For the same reason, I’ll also leave aside spending from the designated funds, such as university tuitions and user fees.

And Babcock said public safety will be excluded from cuts. Assuming he means troopers, prisons, juvenile justice, lawyers and the courts, that takes off the table another $667 million.

Those exclusions leave $3.5 billion in spending from which to cut $1.5 billion, or 42 percent.

Aside from public safety functions, the state spends only $539 million on its 11 smallest departments, covering everything it does but health and education.

Education is the biggie. Alaska spends $1.2 billion to support schools and $327 million for the University of Alaska. Eliminating both would just reach Dunleavy’s goal.

But the constitution requires state support of education. The courts have interpreted that to mean village students have a right to k-12 schooling at home. A 42 percent cut could close schools.

The state pays 59 percent of Anchorage’s school operating budget. State law also limits the local taxes cities can raise for schools. The formula is complicated, but it works out that a 42 percent cut by the state would produce almost the same percentage cut for ASD’s budget.

The state’s other big department is Health and Social Services, which draws $1.1 billion from the undesignated general fund.

That money may do more to keep us safe than the courts and prisons, as most crime in Alaska relates to alcohol and drug abuse. Imagine for a moment the streets of Anchorage without drug and alcohol treatment (much of it through Medicaid), mental health services or shelters.

The department also runs the Pioneer Homes, public health nurses, the medical examiner, and much else, and brings in approximately $1.9 billion in federal spending, which must be matched by state money.

Which brings us to the economic cost of these changes. The university’s Institute of Social and Economic Research studied how previous rounds of cuts contributed to our ongoing three-year recession. ISER economist Mouhcine Guettabi estimated these new cuts would extend the recession by one or two years.

Of course, Dunleavy’s super-sized Alaska Permanent Fund dividend would simultaneously juice the economy. Last year the state spent $1 billion on dividends. To keep his campaign promises, Dunleavy would have to hand out $4.3 billion in dividends in 2019, a one-time shot from savings.

In his talk Sunday, Babcock floated the idea that the legislature would roll back Dunleavy’s proposed cuts and find new revenue (remember, Dunleavy promised not to do that).

After that happens, he suggested, Dunleavy would not be rigid about accepting changes the legislature wants.

Reading between the lines, a nightmare budget might be the first step of a Nixon-goes-to-China move by Dunleavy to sign tax legislation. He’s a smart man and, having won office, probably doesn’t want to follow through on the destructive proposals he promised.

If so, he’d better hope the Democrats organize the House. Republicans won’t want to defy him.

“Dunleavy got elected, and he got elected fair and square, so the people have spoken,” said Sen. Natasha Von Imhof, R-Anchorage, co-chair of the Senate Finance Committee.

She praised Dunleavy’s budget director, Donna Arduin, and is looking forward to seeing what cuts she comes up with. Von Imhof noted that as budget director in California, Arduin cut children’s health care and in Florida cut eyeglasses and dentures for poor seniors.

When the budget comes to her committee, Von Imhof hopes people who testify offer alternatives, such as having non-profits provide services.

But we’ve been through that. During the Walker administration, seven departments were each cut by 30 percent or more. According to an ISER study, Alaska spending per citizen is already below other similar states, when you leave out the dividend. Alaska today spends less than in 1992, when the population was 25 percent smaller.

It’s time to recognize the Alaska pathology of greed and selfishness. We average $514 a year in all taxes (a fifth the national average), we receive dividends of $1,600 a person, and the federal government gives Alaska grants averaging more than $4,000 per person (double the national average).

But it’s not enough for most voters. They backed Dunleavy to take these policies to a logical conclusion, liquidating the legacy of Alaska’s founders and discarding our future.

I never thought it would end up that way.