Meet the gifted writer who inspired me to write this column 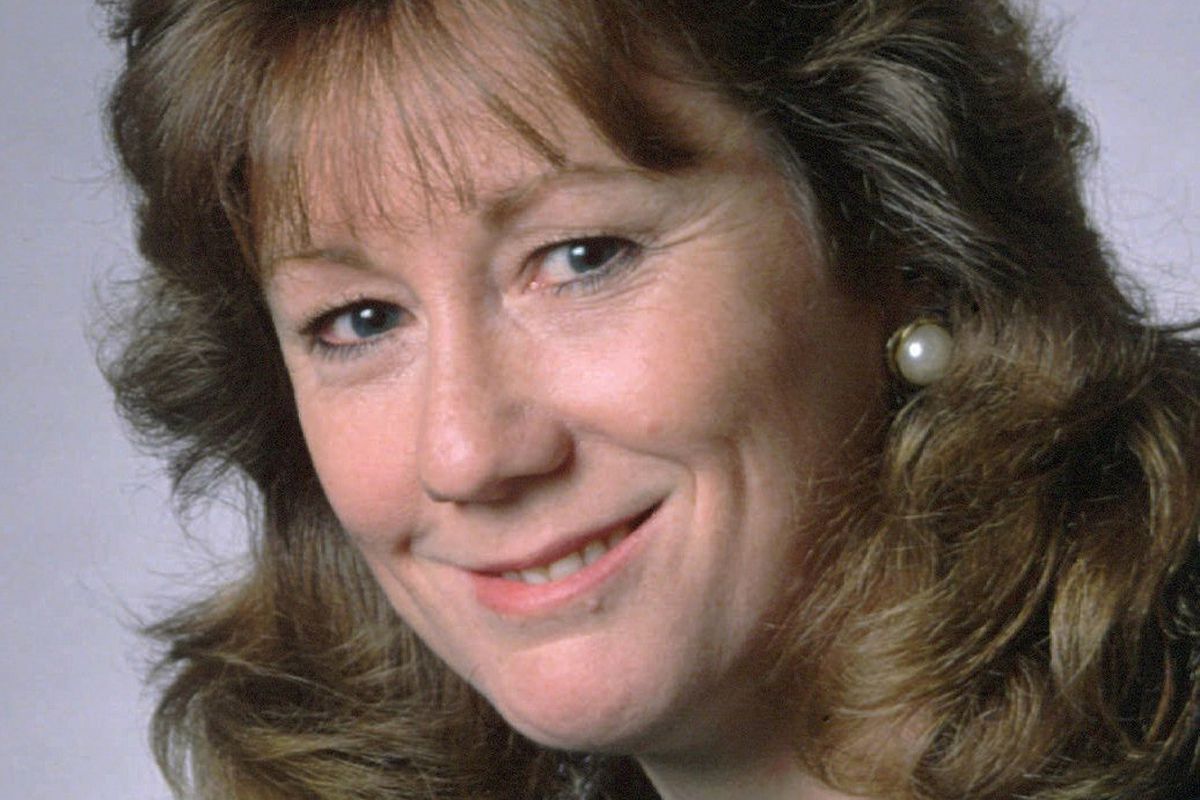 Suzan Nightingale wrote a frequent column for the Anchorage Daily News from 1982 to 1988 and continued writing for the paper and writing and editing books in the 1990s. This is the photograph that ran with her columns. (Bill Roth / ADN)

Suzan Nightingale wrote a frequent column for the Anchorage Daily News from 1982 to 1988 and continued writing for the paper and writing and editing books in the 1990s. This is the photograph that ran with her columns. (Bill Roth / ADN)

There’s ever more need to care about others and see their points of view, as Suzan Nightingale did in her newspaper column.

I read Nightingale as a newspaper-obsessed teenager growing up in Anchorage. Some kids follow baseball players. I checked Anchorage Daily News bylines.

Those papers of the 1970s and ‘80s, Alaska’s most tumultuous and formative period, contain harshness that no longer occurs in politics — we’re much politer now. Old guys I’ve known as mutual friends called each other horrible names back then.

I was 9 when I read a quote in the ADN from Speaker of the House Tom Fink, R-Anchorage, saying he wouldn’t mind giving Gov. Bill Egan “the purple shaft” over oil pipeline legislation. I asked my Dad what that meant. He suggested I write a letter to ask Fink.

[This isn’t the first time ADN nearly went broke, and there are lessons in that history]

The News barely survived, but working there sounds like it was a heck of a lot of fun. As Alaska rapidly grew, young people poured north, taking over power and the chance to build a new society.

Mike Doogan met Nightingale as soon as she arrived, in 1975, and remembered her for her self-conscious care as a journalist as well as her warmth.

“Even though she was not the oldest of our group, she was, from the start, the most mature. It must have been hard for her to put up with people whose idea of a good time was to play 'Risk' all night, or drink beer and belch ‘Louie, Louie,’” Doogan later wrote.

She had big-time talent. For a couple of years she left Anchorage to write a popular column at a newspaper in Los Angeles. But in 1982, as money from the McClatchy chain escalated the newspaper war, Weaver lured her back to write a column here.

That was the column that inspired me.

Nightingale figured out how to give a column a personality. You would make a date with that piece of the newspaper and your morning coffee. She realized sharp elbows alone wouldn’t win a newspaper war. Instead, she humanized the paper and made it ours.

Nightingale’s tiny profiles in 800 words each brought love to an ordinary person in the community. She also wrote about herself, hilariously, always self-deprecatingly. They were Alaska columns, to be cut out and mailed home or stuck on the refrigerator door.

She also wrote powerful political commentary, but always remembering the politician she was criticizing was a human being with a mom. Her wry sense of human frailty and absurdity fell much harder on error than a typical commentator’s high-horse fury and arm-waving.

That was the kind of columnist I wanted to be. My proposal for this column, written to ADN editor David Hulen in 2014, sounds like a description of Nightingale’s.

“The column is generally positive, people-oriented, offers solutions and explanations more than problems,” I wrote. “One story at a time, it bridges cultures, races, ages, and political perspectives.”

I don’t know if I achieved that, but I tried. I’m not Suzan Nightingale.

In fact, I barely knew her. Although she was only 13 years older, at my young age she seemed of another generation. She was a celebrity.

I knew her husband much better, media attorney John McKay. We met at my first reporting job, at KSKA public radio, in 1981, before I left for college.

McKay is my contemporary now, but he had already lived a lifetime when I was a teen. His first wife had died very young, of leukemia, before he came to Alaska in 1977 and fell in with the journalism crowd.

In 1978, while working for then-Gov. Jay Hammond’s re-election campaign, he noticed Nightingale and began pursuing her, getting a date only four years later.

In 1984, she wrote a funny Valentine’s Day column about him. And left him a clue about making the next move. He paid her back the next month, persuading editor Weaver to swap out her morning column and insert his own, unsigned, in which he revealed his intent to propose.

It would run the morning after he popped the question at Josephine’s, the restaurant that was on the top floor of the Sheraton Hotel. The column said, “I don’t know the answer as I write."

Waking together in one of the hotel’s rooms, the paper was delivered. But she wasn’t interested in reading it. When she finally did, she thought it was a fake.

But when she called work to say she would be late, a secretary demanded to know what her answer had been — the newsroom was being flooded with calls.

That was her relationship with readers. She was our sister.

Her death at 46 was a shock for the entire community. We named a park for her (I was on the Anchorage Assembly by then). At the dedication, her son, Martin McKay, then 12, sang with perfect poise the plaintive folksong of loss, “Red River Valley.” He’s 31 now.

Three years ago, John McKay wrote a play that described his nighttime visits to her grave in the Anchorage Cemetery — climbing the wrought-iron fence, under the Sheraton Hotel sign, glowing above like the moon, talking in the dark about their boys.

At the year anniversary, the play says, he left his wedding ring on her gravestone, “the unfamiliar groove on his ring finger deep enough to swallow him whole.”

I still see John McKay all the time. Certain people, like certain buildings or places, live here in the present, but have many shadows of the past that I can see just behind them.

He stays current, but Alaska has changed a lot. I doubt any teens think of local media figures as major leaguers anymore. Anchorage is no longer an island. The major leagues are national.

But now, more than ever, we need voices to help see the community as Suzan Nightingale did.