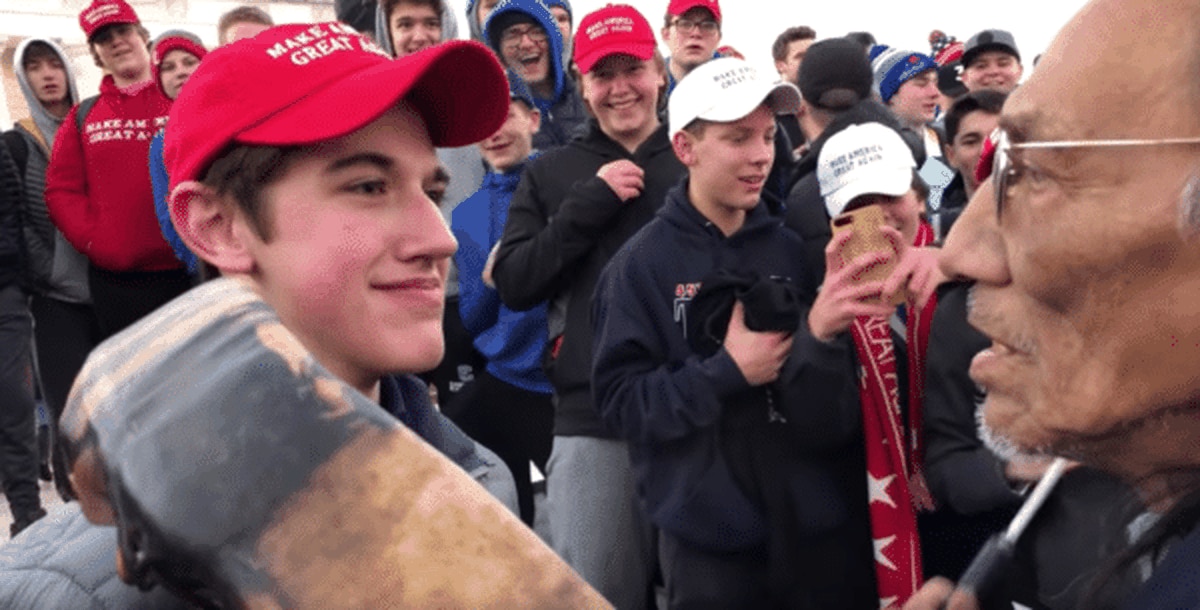 Nick Sandmann, the Kentucky high school student whose face became widely known after he stood in front of drum-banging Native American elder Nathan Phillips on the Mall in Washington. (YouTube)

Nick Sandmann, the Kentucky high school student whose face became widely known after he stood in front of drum-banging Native American elder Nathan Phillips on the Mall in Washington. (YouTube)

The thought has crossed my mind that maybe it was some sort of karmic payback that compelled my son to take his life. A young white man born into a Native community, he was well aware of his inheritance. It was one of many burdens he carried. I spent months on my knees after his passing, turning over every stone, trying to answer the “Why?” that wailed inside of me. Different thought-forms slithered in and out of my mind, which was clouded with grief. It was hard to distinguish truth from the lies that were whispering.

I saw an internet meme several months ago that showed a photo of a group of young, good-looking, Native American lads. The caption read something like: “Native youth, making white kids nervous since 1776." I felt sad and angry as I remembered the times my son was bullied, mostly by adults. There wasn’t much he could say to defend the skin that God put him in. The truth of history weighed on him, heavily. I have often wanted to ask if anything was made better by beating him down. By taking the blame and internalizing hate, did it really help anybody? If his death truly made things better, it would be a bearable offering.

When I first saw the photo of the young man staring down a Native American, I had a strong, visceral reaction, like many. It brought back memories of interactions with a smug young Christian, who had one time preached to me about my path of spirituality. He said I would be better off following Jesus, rather than “chasing Native Americans." At that time in my life, I was committed to understanding Native ways and the place I was raised.

I saw the destruction that was brought upon the Native people, largely by the missionaries. I saw a depth of love, and something humble and real, at various Native gatherings. I also saw the tendencies of white people to latch on to the first Native person who was willing to entertain them and tell them stories, without discernment. I cringed when that would happen, because I knew the true Native ways were often misrepresented, much like the teachings of Jesus can be skewed by individual people. But, that’s what we are as humans. Individuals.

The Bible is confusing to me. In some places, it suggests that the sins of the father go to the sons, but other texts suggest that we each are responsible for our own. Maybe the answer is somewhere in the middle. We absolutely have to do our part to starve racist entities by not feeding the beast. White people have inherited the legacy of the oppressor, whether we want it or not. I’m never quite sure, though, just how much responsibility to take for the ills of our nation. And how? It’s impossible to turn back the clock. Sending everyone back to Europe, or Africa, or Asia is never going to happen. We’re all in this together now. But how can we live together on this sacred land of America? How do we stop the cycles of aggression and abuse? This is something I’ve been contemplating lately, as I’ve had to confront my own abusive tendencies.

Going through deep grief has given me a depth of empathy that I didn’t have before. But it also tilled the soil for seeds of bitterness to grow. My heart was broken so completely, yet time was marching on without me. My world was shattered, but people around me were still laughing, living and going on as if a great destruction hadn’t just happened. There was a part of me that felt completely invisible, and I wanted to be seen. I wanted to be understood. When family and friends interacted with me as if nothing was wrong, I became angry at their insensitivity. “Can’t you see?!” I wanted to shout at them. But I held it down and held it together — until the pain busted out, splashing all over others. When outbursts happened, instead of the intimate understanding I was longing for, I just appeared foolish and unhinged to onlookers. My outbursts didn’t do anything to ease my suffering. It just further alienated me.

One of my teachers says that we can’t compare suffering, that pain is pain no matter how it came. I am not pretending that my experience with losing a son, tragically, is the same as losing an entire nation. But I do know that I’m constantly having to work on my own healing, or the bitterness gets the best of me. I saw it reflected in a loved one’s eyes one time, when I was trying to solicit a modicum of understanding. She wasn’t hearing my truest truth because it was encased in frustration. For a moment, I saw myself as she must have been seeing me: nonsensical and angry. It was a difficult position for both of us to be in as we each tried to find the path to connection. For human beings, connection is everything.

In seeking connection and reconciliation, we don’t get anywhere by blaming. But if space is not created for truth-telling and empathy, then it turns into finger-pointing and projecting. All humans are born from the same great source; it’s a force that I don’t fully understand. I know, though, that children come innocent, and they inherit the world we leave for them. I think of my youngest son, who is now 16, and his group of friends who are all shades of skin. That we, as an American society, once dehumanized children simply because of the color of their skin, is a great shame on our nation. It’s a shame and a pain that’s still held in the belly of our citizens, like pockets of poison. It’s our highest responsibility to transform it and turn it into medicine, lest we dump it onto the next generation.

Chantelle Pence is the author of “Homestead Girl: The View From Here,” a book that examines human relations in rural Alaska.