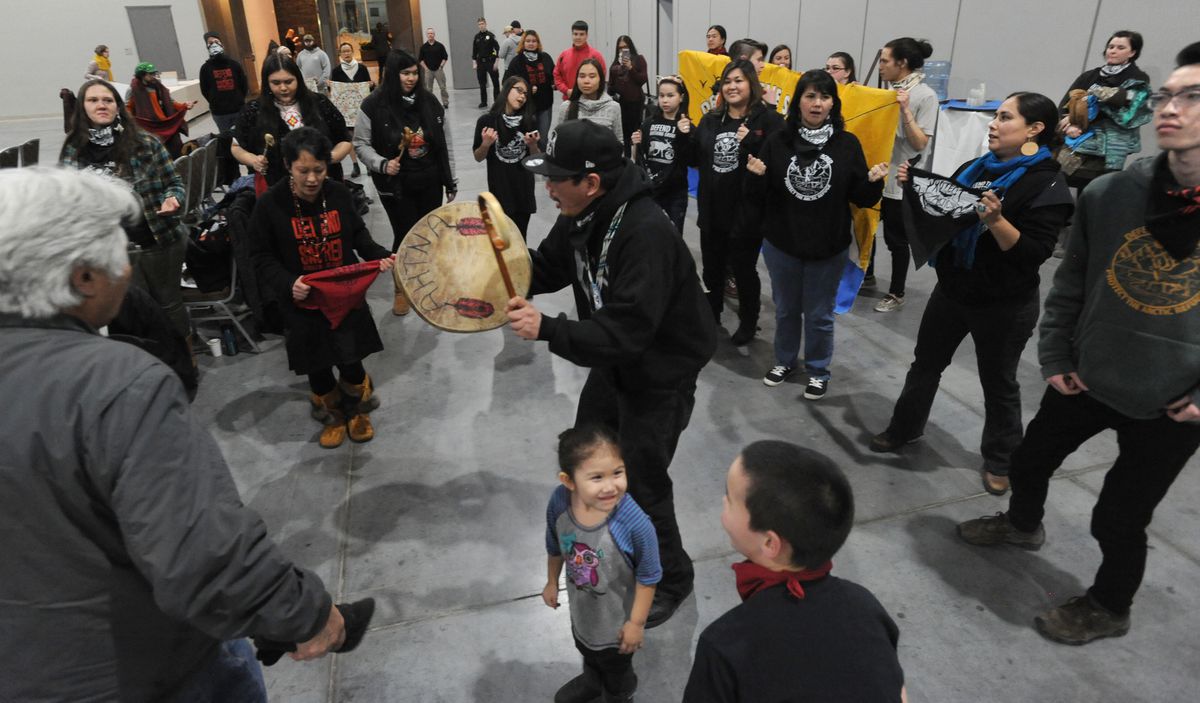 Samuel Johns plays a moose hide drum to end the public testimony in a traditional way with song and prayer at the Dena'ina Center on Monday, Feb. 11, 2019. (Bill Roth / ADN)

Samuel Johns plays a moose hide drum to end the public testimony in a traditional way with song and prayer at the Dena'ina Center on Monday, Feb. 11, 2019. (Bill Roth / ADN)

Proposed seismic exploration on the coastal plain of the Arctic National Wildlife Refuge is on hold, but the Department of the Interior has nevertheless resumed its public process to expand oil development into the Arctic National Wildlife Refuge. The only chance for the American public outside of Alaska to comment on this plan — a plan to hand the coastal plain of the Arctic Refuge over to oil companies — comes on Wednesday in Washington, D.C.

That I will find myself in the nation’s capital on that day is not a surprise to me. I have been here more times than I can count, sometimes alone, sometimes with my Gwich’in family, most recently with indigenous leaders from across the country — representatives not only from the Gwich’in Nation, but also the Standing Rock Sioux Tribe, Navajo Nation, Lummi Nation and others. I travel this time with Gwich’in brothers and sisters from Arctic Village, Fort Yukon, Venetie and elsewhere. It is an honor to stand together and say “We matter. We are real people. We are mothers, fathers. We have jobs. We are not asking for anything but to hold on to our identity. We want to keep our environment healthy for future generations.”

Beyond Washington, D.C., I traveled thousands and thousands of miles to share the story of the Gwich’in and our fight to protect the coastal plain of ANWR from oil and gas development. I have been to New Mexico, California, New York, city after city, month after month to share the voices of my people. The Gwich’in have had a cultural and spiritual connection to the Porcupine caribou for more than 40,000 years.

Others joined me, and we learned many lessons along the way.

I learned that people too far removed from the land and water, and from their obligation to our children and grandchildren, would rather ignore the Gwich’in people than stand up for human rights and our ways of life.

I learned that our own Alaska delegation would rather promote development in a region my people consider sacred than protect our way of life.

I learned that the work of protecting our homes and future generations would take me far away from my own home and community, and that it would exhaust me and test my spirit like nothing has before.

Yet our determination remains strong to follow the direction of our elders. I learned that people thousands and thousands of miles away from the Arctic stand with us. I have witnessed organizations, tribes, activists, political leaders and business people who want to protect the sacred place where life begins. I have accepted that we are stronger together and that standing in solidarity is important.

In the first month of 2019, members of the House Natural Resources Committee helped stop the Interior Department from rushing its drilling agenda during the shutdown. Indigenous leaders from Texas and nearby areas joined me in Houston in delivering 100,000 letters urging SAExploration to stay out of the calving grounds of the Porcupine caribou herd.

The Arctic National Wildlife Refuge is not just a piece of land with oil underneath. It is the heart of our people, our food and our way of life. Our very survival depends on its protection.

Reps. Jared Huffman (CA-02) and Brian Fitzpatrick (PA-01) — a Democrat and a Republican — recently introduced the Arctic Cultural and Coastal Plain Protection Act to restore protections to the coastal plain. I urge all members of Congress to support this bill. Together we can protect what we have left.

Bernadette Demientieff, a Gwich’in Athabascan from Fort Yukon, is the executive director of the Gwich’in Steering Committee.