Fight over North Slope revenues is a leadership crisis 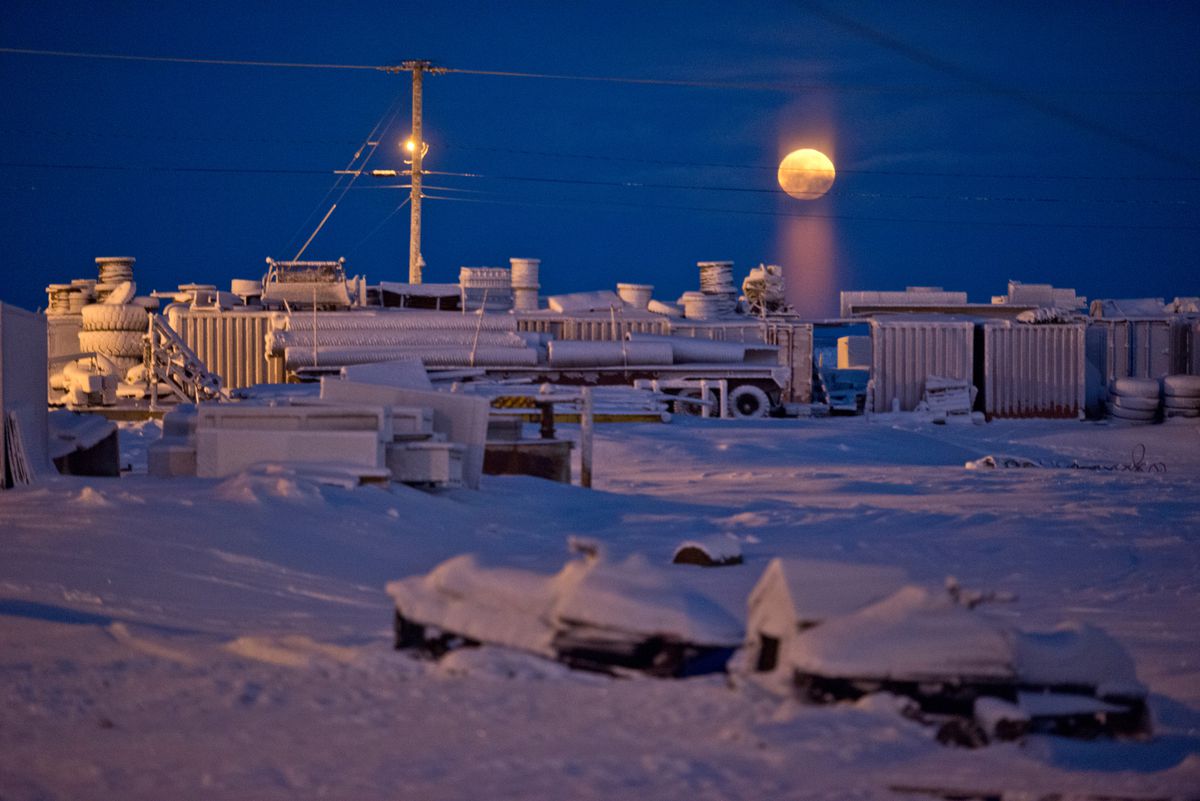 The full moon rises into view from Utqiagvik, the North Slope city that was known as Barrow until its name changed earlier this month, on Tuesday, December 13, 2016. Sometimes known as a moon pillar, the orange light pillar under the moon is the light (reflected from the sun, bounced off the surface of the moon) is again reflected and refracted through ice crystals in the earth's atmosphere, according to National Weather Service's David Snider. Because the ice crystals are flat, they channel the light vertically. (Marc Lester / ADN)

The full moon rises into view from Utqiagvik, the North Slope city that was known as Barrow until its name changed earlier this month, on Tuesday, December 13, 2016. Sometimes known as a moon pillar, the orange light pillar under the moon is the light (reflected from the sun, bounced off the surface of the moon) is again reflected and refracted through ice crystals in the earth's atmosphere, according to National Weather Service's David Snider. Because the ice crystals are flat, they channel the light vertically. (Marc Lester / ADN)

In light of media reports about the state’s attempt to take away revenue from the North Slope Borough, there are a number of statements worth correcting. First and foremost, it isn’t correct to call North Slope revenues “oil money.” The North Slope has a property tax — property taxes are the primary source of revenue for local governments in Alaska.

There are 35 municipalities with property taxes, with that tax applied to property of different value. In the North Slope, the property with value is that of oil and gas infrastructure. The state’s refusal to implement a broad-based tax has required it instead to look at where there is a current tax base and to pre-empt local governments from collecting what is rightfully local revenue. This approach is being taken on high-value North Slope infrastructure, and also on high-value fisheries taxes. Local taxpayers – residents and businesses – will have to ask what or who is next.

This isn’t a fight over oil revenue and who should or shouldn’t benefit from resources within their boundaries. The argument that the borough benefits disproportionately is like the federal government arguing that a state’s resource wealth should be shared with other states. This is a leadership crisis in a state afraid of its own shadow.

States are understood to have sovereignty within their boundaries, with taxation one of their three generally recognized sovereign powers. Alaska’s Constitution provides for the sharing of its sovereignty to its political subdivisions, delegating additional powers of taxation to local governments. This is what makes a local government a political subdivision of the state. A state unwilling to tax will cannibalize those who are required by law to do so on its behalf.

The other point to be made about North Slope governance is less about the revenue side and more to their fulfillment of local government obligations. Namely, as a political subdivision, they carry out public services on behalf of the state. The extent of this is missing in the article and revenue isn’t relative to anything more than a certain amount of spending.

Mayor Harry Brower Jr. noted that revenue is used for a long list of services, from schools to public safety, subsistence and search and rescue. What he didn’t say is that the borough exceeds every other local government in the scale and scope of these services, even bearing in mind the smaller population of the region. We’re talking about a borough that is the largest county-equivalent in the nation, the size of California.

The North Slope Borough prioritizes public safety for residents and an active oil and gas industry. It has more search-and-rescue assets in the region than the entire federal government – will they get picked up if the budget is cut? The borough provides police and fire services in each of its communities – will the state move and pay for Alaska State Troopers to provide the same level of services? The borough invests twice as much as the state does in its school district. Who will pick up those costs if the borough’s tax base is eliminated? It’s the only local government that is actively researching and protecting subsistence resources. The North Slope Borough is an incredible asset for Alaska, to be celebrated, not sold out.

It is not enough for the media or state to point to a certain level of spending of any one local government. And “too much” doesn’t mean anything if you don’t evaluate it relative to what is being accomplished, or what would have to be replaced. Local governments are there to provide services to complement or in place of the state’s provision of services. For a state willing only to do less with less, Alaska’s residents and industry will be less open for business, less safe and less sustainable.

Nils Andreassen is the executive director of the Alaska Municipal League. AML is comprised of 165 incorporated cities and boroughs, and offers best practices, support services, and advocacy to its members.