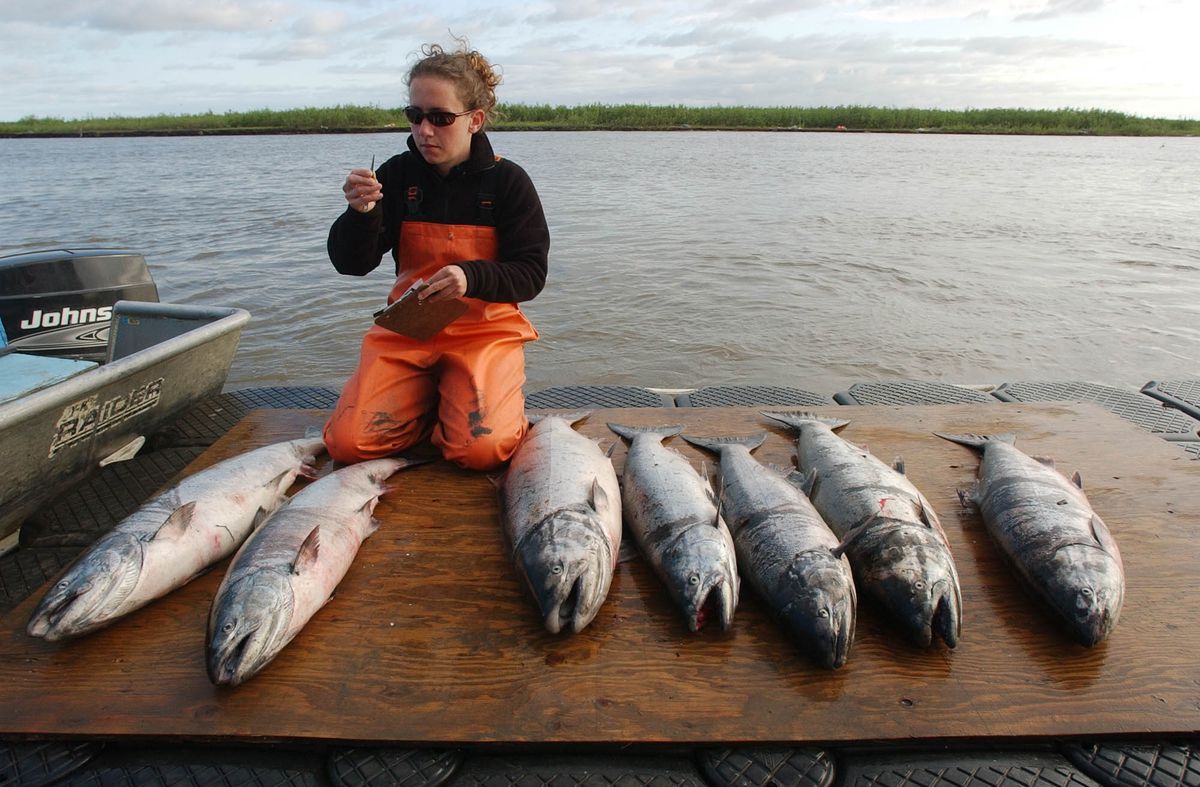 Maureen Horne-Brine collects fish scales from king salmon caught in an Alaska Department of Fish and Game test fishery near Emmonak on June 20, 2005. The scales will be used to determine the age of the fish. She was helping fishery biologist Larry DuBois conduct a study of Ichthyophonus, a disease first noticed in some Yukon River fish in the late 1980s.

Maureen Horne-Brine collects fish scales from king salmon caught in an Alaska Department of Fish and Game test fishery near Emmonak on June 20, 2005. The scales will be used to determine the age of the fish. She was helping fishery biologist Larry DuBois conduct a study of Ichthyophonus, a disease first noticed in some Yukon River fish in the late 1980s.

Times are tight for state budgets these days. It’s easy to forget the crucial role government agencies play in sustaining our economy. Fisheries are a prime example. Most Alaskans don’t know that Alaska is world-famous for its management of fisheries through a system based on science.

Even those of us familiar with highly political “fish wars” over allocations of salmon between sport and commercial fishers sometimes forget that.

To be able to fight over fish we need healthy fisheries, however. Thanks to the commitment of Alaskans over the years to science-based fisheries management — in fact, since we became a state in 1959 — we’ve been blessed with a huge natural resource that employs thousands and feeds millions.

The sustainability of that depends on science-based management. For that, Alaskans can give themselves a pat on the back.

Interestingly, Alaska was the first place where the scientific principles of sustained-yield fisheries management were put in place on a broad scale, first with salmon and now with all the fisheries we manage in both state and federal waters, including cod, crab, herring and pollock.

Before Alaska became a state, our salmon fisheries were overfished and depleted. There had been decades of mismanagement by the federal government.

When Alaska’s Constitution was written in 1956, the delegates to the constitutional convention wisely put in a requirement that natural resources be managed for sustained yield. They had our then-depleted salmon fisheries in mind.

Based on that, when Alaska actually became a state, the new Department of Fish and Game adopted an innovative plan for managing salmon. It had been developed several years earlier by scientists at the University of Washington and recommended to federal fisheries managers, who largely ignored it.

But backed by our new constitutional mandate for sustained-yield management, Alaska’s Legislature and our first governor, Bill Egan, adopted it. Give them credit. The system wasn’t cheap, and Alaska’s treasury was basically empty at the time.

The Alaska management approach is labor and technology-intensive because it depends on field work, with biologists counting fish and estimating sustainable populations. That allows managers to ensure that a portion of a salmon run is not harvested, and survives to reach the spawning grounds.

Local fisheries managers assess the salmon runs throughout the season and are given the authority to open and close fisheries to achieve the escapement goals, while also providing for a fishery.

The local fisheries managers’ decisions are largely respected by harvesters and fish processors, as painful as they sometimes are.

For other state fisheries, such as cod, herring and crab, biologists do population assessments using test-fishing surveys, with boats out on water, to see if the population is healthy enough to support harvesting. This usually requires hiring a vessel. That’s $4,000 to $5,000 per day, not including crew. Aircraft are sometimes used for aerial surveys.

We shouldn’t forget game management, because the same principles of sustained yield backed by science apply there, too. This requires field work to estimate sustainable populations, data used by Fish and Game managers and the Board of Game to set hunting seasons and bag limits.

Some of the science is now pretty sophisticated. For example, state Fish and Game scientists operate a genetics laboratory in Anchorage which can determine the origin, or stock composition, of salmon harvested in a fishery.

It’s important to know about to improve management of “mixed-stock” fisheries where harvesters take salmon in areas where the salmon are migrating to other regions.

When boats are in the water fishing managers have to know quickly which streams the salmon being harvested are from so they can adjust the fishing closures and openers to ensure the escapement goals are being met.

Using tissue samples, scientists in Anchorage can tell, for example, if sockeye salmon being fished in Cook Inlet are from the Susitna or Kenai rivers, or other streams, all which can have different needs for escapement.

Our state treasury is again under stress. But like those early leaders, who had foresight, let’s credit our Legislature and governor with giving state fisheries managers the money they need to do their jobs.

What happens if we don’t spend the money to get the field data? Quite simply, fewer fish will be caught by all users – commercial, recreational, subsistence and personal use.

That’s because of the constitutional requirement to manage for sustainability.

It would mean fewer fish caught and sold, less income for commercial fishermen and fewer dollars entering the economy.

This is a big deal. Commercial fishing and processing employ about 60,000 people, which includes more than 26,000 Alaska residents. Harvesters and processors also pay about $146 million a year in state and local taxes and fees.

To manage and sustain this, the Fish and Game department depends on state general funds for about $60 million a year, which is supplemented by user fees and federal funds, to support fisheries and game management.

Approximately one-third of the department’s total staffing of about 700 are employees tasked with ensuring that there’s enough science and data to make good decisions.

Based on that, one could assume that a third of the state general fund dollars, or about $20 million, goes to the science that supports industries that employ thousands of Alaskans.

Gov. Mike Dunleavy did order a reduction for the department this year, along with cuts to other state departments, but the Fish and Game agency fared better than most.

The governor is getting a lot of bricks thrown at him because of his budgets, but he has tried to support agencies that directly support the economy.

So let’s give him a little credit for that, and to legislators who continue to support sustained-yield, one of the bedrock principles in our constitution.