Is Gov. Dunleavy an accidental genius? 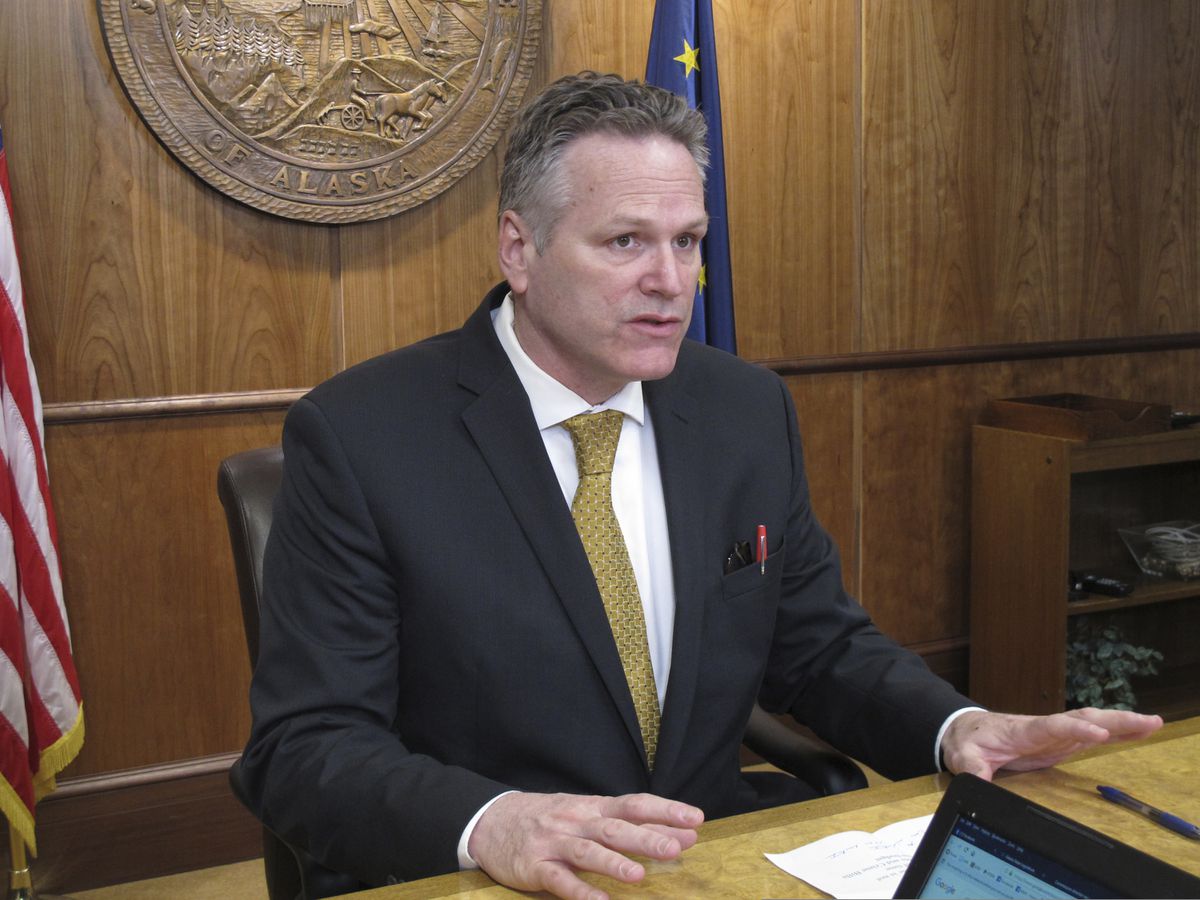 Alaska Gov. Mike Dunleavy speaks to reporters during a news conference on Tuesday, April 9, 2019, in Juneau, Alaska, that focused on the state budget. Dunleavy questioned the potential for any deal with lawmakers if they failed to act on his proposed constitutional amendments and crime bills. (AP Photo/Becky Bohrer)

Alaska Gov. Mike Dunleavy speaks to reporters during a news conference on Tuesday, April 9, 2019, in Juneau, Alaska, that focused on the state budget. Dunleavy questioned the potential for any deal with lawmakers if they failed to act on his proposed constitutional amendments and crime bills. (AP Photo/Becky Bohrer)

Eating lunch the other day, a friend turned and asked: “So, do you think Dunleavy is crazy or an accidental genius?”

A good question, considering the maelstrom swirling around Gov. Mike Dunleavy’s controversial bid to bridge Alaska’s $1.6 billion budget shortfall without taxes, while providing full Permanent Fund dividends. His approach would mean taking a meat ax to the most sacred of cows - state government.

The mere thought of it renders our friends on the Left apoplectic. Letter writers to newspapers are spitting mad. Umbrageous pundits whine and moan about this transgression and that. Dunleavy is misguided, they say, a fibber, a mean man, a bully. Worse, he hates kids and education and he hates poor people, sick people and the Marine Highway System - and everybody else, too. Oh, and rural Alaskans.

Dunleavy is demented, a certified wack job, his detractors want Alaskans to believe.

His sin? He wants to balance spending and revenues - rather a novel idea in Alaska. His audacious promise to sop up the red ink without imposing taxes or stripping Alaskans of their full dividend has the gobsmacked Left baying in full throat. It cannot be done, they tell anyone who will listen; Alaska will be destroyed, we will all die.

As if that were not enough, there are Dunleavy’s three proposed constitutional amendments that stick it to the Legislature’s spending and taxing authority. One would constitutionally enshrine the dividend’s traditional payout formula. The second sets a spending limit. The third would require voter approval for new taxes. The three would make ordinary Alaskans responsible for Alaska’s fiscal future, something that gives the Left palpitations.

Rather than pussyfoot around, Dunleavy unabashedly tells the Legislature to pass those amendments or there will be no budget deal of any kind. Nada. Zip.

Is our embattled governor as crazy as an outhouse rat, or an accidental genius? Or is he simply the last guy in line, the guy left holding the very short end of a very long stick?

The ugly truth? In recent years, Alaska’s lawmakers and governors have been grossly irresponsible, cleaning up billions in deficits by siphoning off the state’s once respectable savings accounts to appease special interests, the very same interests now loudly adverse to any Dunleavy plan. Legions of Alaskans were complicit accomplices.

Legislatures and governors simply kicked the can down the road. No fiscal plan. No forward-funding. No spending initiatives. No restraint. Oh, there have been, in recent years, anemic House attempts to adopt an income tax - as the state floundered in a recession, no less - but not much else.

Our spendthrift state long has been the poster child for fiscal goofiness. The $184 million railroad extension to Point MacKenzie. Dairies. A $50 million fish plant. Multi-millions here; mega-millions there. In 2008, former Gov. Sarah Palin, in an explosion of populist nitwittery, even handed out a “resource rebate” of $1,200 to each Alaskan. That tab? About $1 billion. Not much has changed. Got a buck? Spend two. Since fiscal 2013, Alaska has spent $16 billion more than it has taken in.

That was then; this is now. Dunleavy’s in-your-face budget proposal and demands for spending controls changed everything.

Yes, there have been missteps. Trying to peddle his plan at meetings sponsored by Americans for Prosperity? Not such a great idea. It made the meetings the focus, not the message. Hiring an Outside budget lady to bring the bad news? With Alaskans’ parochial view of outsiders? Really?

With the almost daily blather from the Left that Alaskans really, truly want the state’s spending to continue unchecked, it is easy to forget 145,631 Alaskans voted to put Dunleavy in office - and his smaller-government agenda certainly was no secret. Nobody who cast a vote for him should be surprised he is trying to rightsize government. Nobody who listened should pretend surprise at his proposed cuts.

Will he be able to pull it off? It is difficult to believe lawmakers will go along completely, but he has indicated there could be a deal if his constitutional amendments are passed. In the end, Dunleavy has his veto pen; the Legislature has its override.

A rational person might ask, “Hey, there is $16 billion in the Permanent Fund’s Earnings Reserve Account, money earmarked for government and dividends, why not a compromise? Why not stretch the cutting process for a year or two or three to soften the blow?

That is a conversation we finally can have because Dunleavy dropped a cherry bomb in the sugar bowl and we are running out of can-kicking room. For the first time in years, we are at least talking - or yelling - about what must be done.

In stirring up the tempest to get here, Dunleavy, indeed, may be an accidental genius - or crazy like a fox.