An AR-15 ban would be asinine 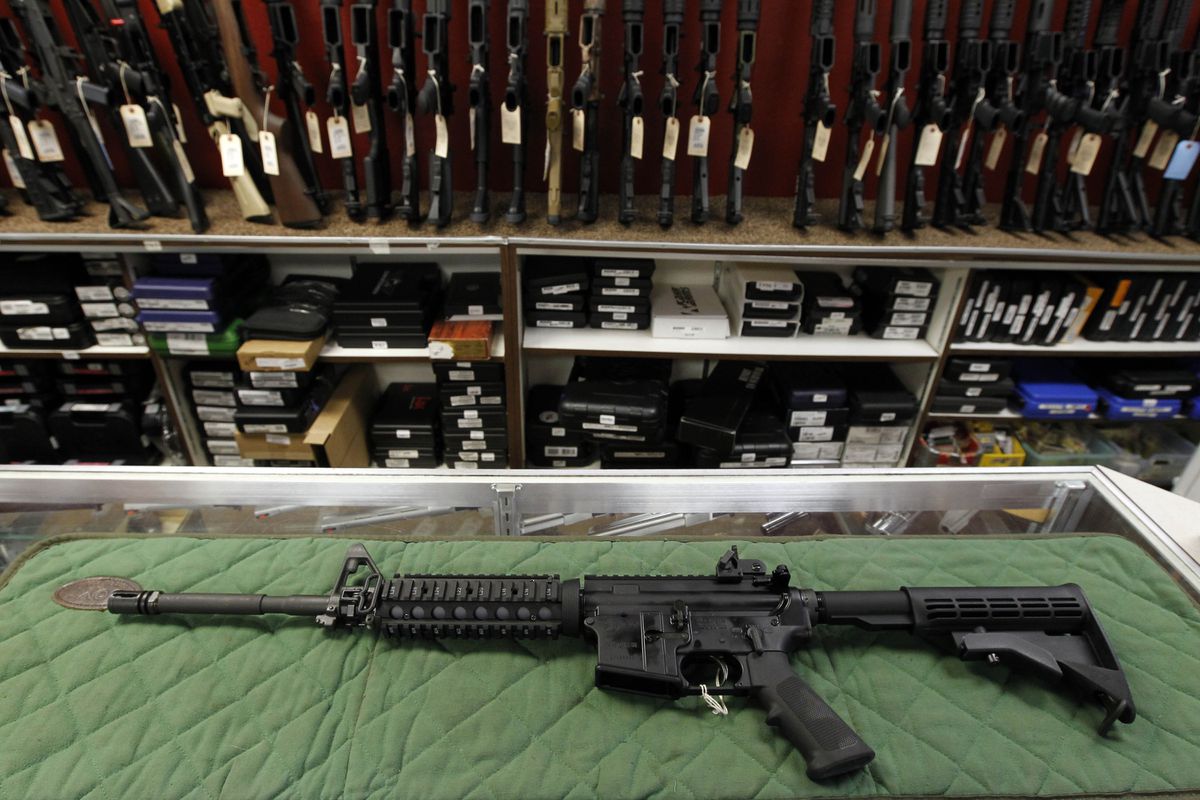 FILE - In this Thursday, July 26, 2012 file photo, an AR-15 style rifle is displayed at the Firing-Line indoor range and gun shop, in Aurora, Colo. A new poll shows a majority of Americans favor stricter gun laws, and most believe schools and places of worship have become less safe over the last two decades, according to a poll conducted by The Associated Press-NORC Center for Public Affairs Research both before and after last week’s mass shooting at two mosques in New Zealand. (AP Photo/Alex Brandon, File)

FILE - In this Thursday, July 26, 2012 file photo, an AR-15 style rifle is displayed at the Firing-Line indoor range and gun shop, in Aurora, Colo. A new poll shows a majority of Americans favor stricter gun laws, and most believe schools and places of worship have become less safe over the last two decades, according to a poll conducted by The Associated Press-NORC Center for Public Affairs Research both before and after last week’s mass shooting at two mosques in New Zealand. (AP Photo/Alex Brandon, File)

Understanding the political Left is a mind-boggling exercise for normal Americans.

One need only take a peek at its clown car - now a Greyhound bus, actually - of hopefuls vying for the Democratic nod in next year’s presidential election to see why. While the front-runners are wrong on every issue, they are completely off the hook when it comes to the one that warms the cockles of their hearts, and the one they seemingly know least about - guns, and AR-15s in particular.

On that issue, they are foaming-at-the-mouth nuts.

Democrats recently have veered hard left on guns. While most of the presidential field spouts the usual gun control babble, their proposals pale compared to those offered by New Jersey Sen. Cory Booker and California Rep. Eric Swalwell. These guys are taking it to a new level, one-upping their way into the headlines.

Booker is offering a 14-point plan The New York Times breathlessly describes as “the most progressive gun control measures suggested by a candidate seeking the Democratic nomination for president ...”

Indeed. His brainchild would dry up private gun sales and ban AR-15s and high-capacity magazines, even as property and violent crimes trend downward nationally. More troubling? It would enact a gun-licensing scheme setting minimum standards – established by the government, of course – for gun ownership.

As a law-abiding American, you would need to apply for a license, and be fingerprinted and interviewed. There would be a a gun safety course and a federal background check. If you received the license – likely a big if – it would be valid for five years. There would be fees, of course.

And Swalwell? He’s for gun licensing and banning AR-15s, too - and a $15 billion federal mandatory buyback (read: confiscation).

Whether any of these folks or The Times have bothered to read the Bill of Rights beyond the First Amendment is unclear.

The Second Amendment, for instance, contains nothing about having to ask permission to exercise the right to keep and bear arms. Nothing about safety courses or interviews. Nothing about FBI investigations or fees. Certainly nothing about minimum government-set standards for gun ownership.

These guys would ban the most popular sporting rifle in America, with perhaps more than 10 million circulation, simply because it looks like M16 or M4 service rifles used by the military. The hypocrisy of such a ban? The rifle has the same action as tens of millions of other sporting rifles and handguns — which, inexplicably, would remain unaffected.

Have AR-15s been involved in mass shootings? Tragically, yes. But although FBI statistics show an average of about 13,000 homicides per year between 2007-2017, only about one-tenth of 1% of those were in mass shootings involving AR-15s. You have better odds of being beaten to death than being killed by an AR-15 - or any other rifle, for that matter.

What was the weapon used in most of those homicides? Handguns. They were the Left’s bugaboo du jour until it decided military-style rifles offered more potential for advancing its agenda by fear. Weapons of war, it calls them, although they most certainly are not. You can bet handguns would be in the crosshairs if AR-15s were banned.

It should be noted that in that same 10-year period, 2007-2017, more than 300,000 people died in vehicle accidents, the National Highway Traffic Safety Administration says, yet there is no call from the Left to ban cars and trucks - or the alcohol and that played a role in a significant percentage of those traffic deaths.

The reality is that a ban would be asinine. The sheer number of extant AR-15s in this country makes it impossible to round them up. There almost certainly would be massive resistance. We do not have enough prisons for what likely would follow a national mandatory confiscation order. My guess is that it would be nigh on to impossible to find anybody stupid enough to go door-to-door to collect them. Certainly, the Bookers and Swalwells would not volunteer their kin for the job.

What is so confusing about the Left is that its “solutions” never work, but it remains determined and undeterred. Banning AR-15s will not stop crime or killing any more than 1994’s ill-fated, ineffective “assault” weapons ban - and certainly no more than banning alcohol curtailed drinking during Prohibition.

The promises to unilaterally ban AR-15s - strip them from law-abiding citizens under the threat of prison - illustrate what most of us already know: The Left takes to totalitarianism like children to candy.

There is just no understanding that.