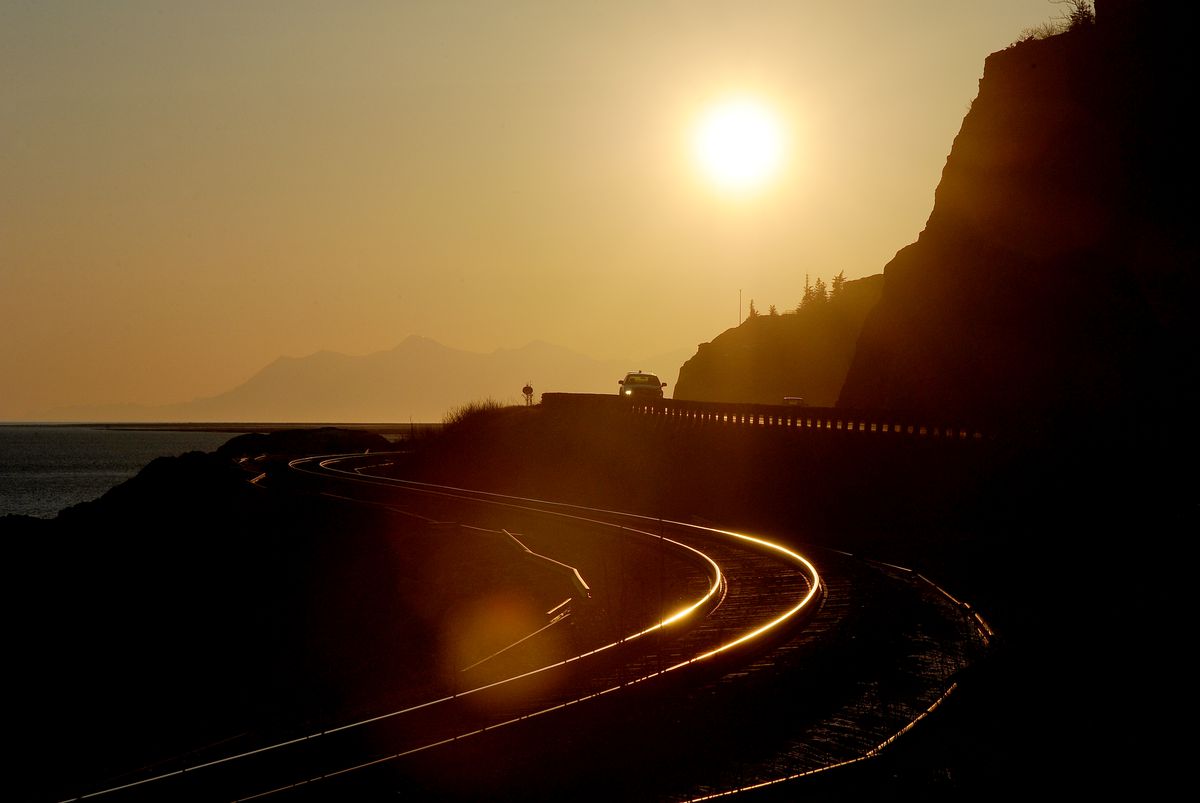 BOB HALLINEN / Anchorage Daily News Traffic moves along the Seward Highway next to Turnagain Arm on Wednesday, April 17, 2013. The setting sun lights up the Alaska Railroad tracks including the old rails that have been replaced by the railroad in a major upgrade of the tracks along the arm. 130417

BOB HALLINEN / Anchorage Daily News Traffic moves along the Seward Highway next to Turnagain Arm on Wednesday, April 17, 2013. The setting sun lights up the Alaska Railroad tracks including the old rails that have been replaced by the railroad in a major upgrade of the tracks along the arm. 130417

“Railroad expansion hopefuls have oversize dreams,” headlined an op-ed by Larry Persily published in the ADN May 17. As one who is helping to make a rail connection from Alaska to the North American rail system happen, I disagree with Larry’s claim that the Alaska to Alberta (A2A) Railway is a “dead-end.”

For the past four years, as both a financial adviser and strategic consultant, I have worked alongside A2A to make real an idea that has long been sought in Alaska and Yukon — that of building a rail connection to the Lower 48.

Compared to several previous attempts we can trace back to the 19th century, I believe there has never been a better time to accomplish this in the private sector. Ports bringing goods in and out of the Pacific coasts of North America are congested, and with a rail link in place, Alaska’s ports can bring cargo in or out of this continent three to five days faster. Commodity producers in Alaska, Yukon and Alberta need transportation options, and proposed tonnages are likely enough to pay for the multibillion-dollar cost of rail construction and annual operation.

For that reason, Sean McCoshen and David Sharpe, the Canadian founders of A2A, have invested more than $60 million to date to get the project ready to attract world-class investors. Here’s what’s been done:

- Top-flight rail engineering firms are involved to design more than 1,500 miles of rail and improvements to the existing Alaska Railroad. A corridor suitable for an economically competitive railroad linking North Pole to three rail interchange points in Canada has been identified by A2A, building on work at the University of Alaska Fairbanks and the Van Horne Institute in Alberta.

- Alaska Native landowners and First Nations in Canada have been contacted, and some have even agreed to be equity holders in the venture.

- Two governors of Alaska, Mike Dunleavy and Bill Walker, have signaled their support to the federal government, which must make some preliminary decisions to allow a border crossing.

- A more comprehensive federal and state review has been outlined, along with a parallel process involving First Nations and agencies in Canada. Those permitting efforts will invite significant public input before construction begins.

- An agreement with the Alaska Railroad to obtain right-of-way is pending.

- A proposal to the Matanuska-Susitna Borough to complete the rail link to Port Mackenzie is also pending, and funds have been set aside for that construction, which has already been permitted.

- Preliminary discussions with shippers will continue as economics are better known from the corridor design.

Alaska’s Legislature, which passed Senate Joint Resolution 11 last week, welcomed the idea. We all know big projects are not easy. We all know that bringing huge sums of capital to Alaska is difficult. But we continue to welcome pioneering projects and ideas, and that’s what we should do.

I have respect for Larry Persily and his knowledge of this corridor, especially as he oversaw permitting attempts for a more expensive, ill-fated natural gas pipeline from Alaska across Canada through this same region. But I disagree with the premise of his recent op-ed, suggesting an attempt to build a rail link is unwelcome and uneconomic. This attempt is being made with private capital. On its own merits, it will ultimately sink or swim in the global capital and transportation marketplace. So, in contrast to Larry’s article, I urge Alaskans to welcome these risk-takers, and assist the permitting process to be sure it is done right for people, stakeholders and the environment.

Much more is to be learned before jumping to conclusions, and I can only hope A2A’s efforts pay off. A rail connection will bring additional reliable transportation to our state, and help bring revenue to our ports, our resource projects, and our tourism industry. I am glad Gov. Dunleavy and our Legislature have signaled that Alaska is open for business. Together, we have shown that dreaming big and thinking smart do not have to be at odds.

Mead Treadwell served as lieutenant governor of Alaska from 2010-2014, and has led investment teams throughout his career which have created significant technology, service and infrastructure firms, in Alaska and elsewhere, serving global markets. He is an adviser to the developers of the proposed Alberta to Alaska Railway.