Operation Colony Glacier: A feel-good story or something greater? 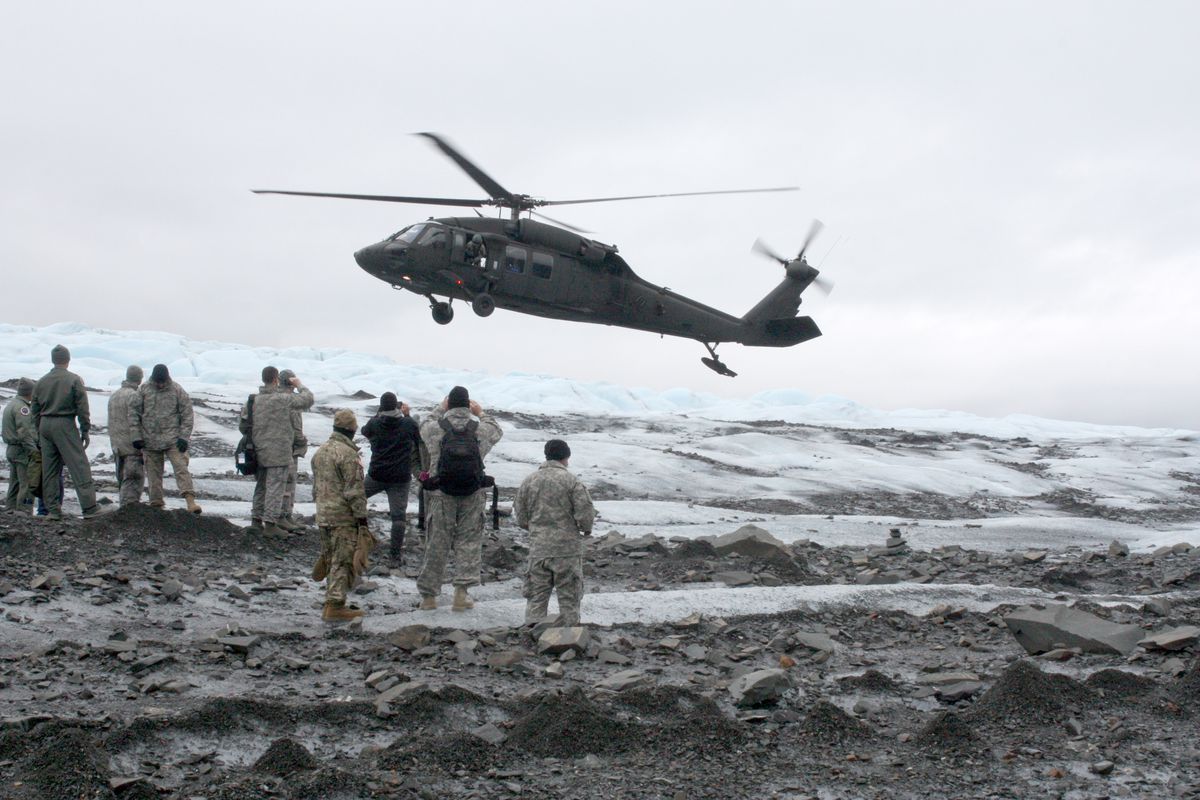 It’s a moment service members know well: Ever wrestle with the right answer to a civilian who says, “Thank you for your service?” We will get to that answer in a moment.

In November 1952, a military plane was flying from McChord Air Base in Washington to Elmendorf Air Force Base here in Anchorage. Unfortunately, the C-124 Globemaster II lost its way and crashed into the side of Mount Gannett, approximately 45 minutes from its intended destination. A search and rescue team discovered the crash site, finding the aircraft had crashed into the side of the mountain and that most of the debris had fallen onto Colony Glacier. There were no survivors. Fifty-two service members from the Air Force, Army, Navy and Marines lost their lives in the crash. Because of heavy snowfall and dangerous terrain, efforts to return the personnel from the crash site were discontinued in the winter of 1952.

In 2012, the remains of the C-124 were rediscovered by an Alaska National Guard crew. The crash site had traveled nearly 14 miles, riding the flow of Colony Glacier. Shortly after the discovery, it was confirmed that the debris was, in fact, from the 1952 crash. Since 2012, recovery of the remains has been ongoing. Thanks to the efforts of a joint recovery team, 40 of the 52 members’ remains have been identified, ensuring both dignity, honor and respect to the fallen, as well as care, service and support to their families.

Standing on the glacier — walking the debris field, watching the recovery team — is a surreal experience. Tall mountain peaks with wildlife and waterfalls surround Colony Glacier and the debris field. It is a beautiful, awe-inspiring setting that can only be found in Alaska. In the middle of the natural beauty, a somber tone takes hold of you when you walk around and see personal items and parts of the aircraft. Reality sets in when you think about the 52 lost service members who were probably excited about starting a new chapter of their lives in a mysterious place called Alaska.

It is important to understand that the U.S. is unique in how it values military service to our country. During World War II, the U.S. was the only country to give family members the option to return their loved ones who lost their lives fighting overseas. Two of the 10 federal holidays are designated for the single purpose of honoring military service. Among U.S. citizens, the approval rating for the U.S. military is more than 70% — second to only nurses. Americans have asked our congressional leaders to mandate continued efforts and funding to return fallen service members to their families.

Knowing how much trust and value is bestowed upon our American military, what does that mean for those of us who serve? For starters, we must continue to jealously guard our apolitical stance as an American military that is under civilian control. We must not be seen as an organization that shows favoritism to a race, gender or political leaning. The civilians who celebrate and honor our service come from a rainbow background of political thoughts and diverse upbringing. We equally protect and value the lives of all of our American citizens. Our continued humble and grateful service with no political leanings will protect our country and keep us out of the turbulence that takes place in other parts of our society. Being seen as an apolitical organization removes unnecessary distractions to our service and enables a connection between citizens and those serving that permeates all levels of society.

Working in the Department of Defense — an extremely large bureaucracy — can feel like working for an impersonal leader who sometimes lacks a clear vision or fails to show an interest in you, your family or your service to the country. But the “big boss” — the American citizen — cares deeply about service to our country. Operations like Colony Glacier and the continued funding of rescue and repatriation missions are proof that uniformed service members are valued. So when the civilian walks up to the service member and thanks him or her for their service, I believe the proper response should be one of humility and gratitude. The response should be: “You are worth it.”

Col. Mark Schmidt serves as director of operations for the U.S. Air Force’s Alaskan Command. He is based at Joint Base Elmendorf-Richardson.