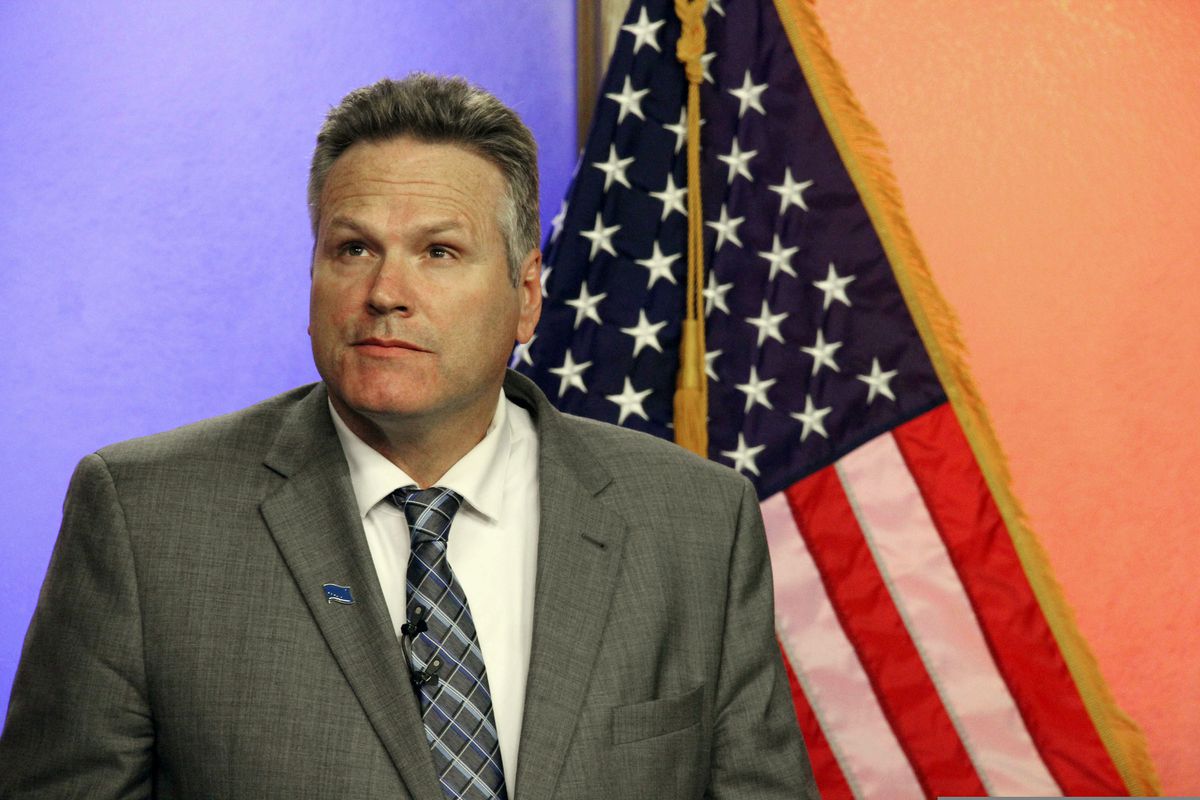 FILE - Then-candidate Mike Dunleavy prior to a debate with his Democratic opponent, Mark Begich, in Anchorage\ at KTVA, Nov. 1, 2018. (AP Photo/Mark Thiessen, File)

FILE - Then-candidate Mike Dunleavy prior to a debate with his Democratic opponent, Mark Begich, in Anchorage\ at KTVA, Nov. 1, 2018. (AP Photo/Mark Thiessen, File)

He promised an easy approach during his campaign. He said the state could cut vacant positions, make Medicaid more efficient, consolidate heath insurance and produce $400 million or $500 million in savings. An increase in oil production would take care of everything and the state would be paying $1 billion more in Permanent Fund dividends.

His imaginary budget plans received little media scrutiny and he got away with it. It was only after the election that he invented the story that as a candidate he was all about tough choices.

As he announced his vetoes of $444 million, Dunleavy claimed that he never promised easy fixes.

“We ran on a platform of trying to close this budget,” he said. “We’re focused on doing that. We’re using an approach in which we are reducing the size of government. We believe we can get there. It won’t be easy. But the other options were not going to be easy as well.”

In fact, Dunleavy, promised nothing but easy fixes, though most of the news coverage of the state budget debacle has skipped this key point. Amnesia is Dunleavy’s strongest ally.

As a reminder, here is my guide to details of Dunleavy promises to not cut the ferry system, public schools, the University of Alaska, the Pioneers Home, the court system, the prison system, state Troopers and Power Cost Equalization. It also includes his promises to increase spending on education, the courts, Troopers and prosecutors.

KTUU debate, Oct. 25: Dunleavy said efficiencies would get the budget to $4 billion and it could grow at 2 percent a year. Asked to name specific cuts, he said: “$ 4.5 million fast rail study from Mat-Su to Anchorage, I would eliminate that. I would look at eliminating climatologists. We have over 2,000 funded but unfilled positions in state government. I would look at those positions to see what positions and what funding we could move to other parts of government to reduce the size of government.”

AFN debate, Oct. 19: “Does your plan for leading Alaska out of this fiscal crisis include additional cuts to state departments? If so, which departments? And specifically, which programs and how much do you intend to further cut?”

“I also would be looking at potentially consolidating, on a volunteer basis, the insurances, for example, for school districts and cities and municipalities, to bring them into the state Alaska Care to drive down the cost. There have been estimates that if we do that we could save anywhere from $100 to $150 million going forward. I would start with these efficiencies first in order to realize some cost savings.”

“We also have, for example, a fast rail study from Palmer to Anchorage, where I live, in the valley. We don’t need to be paying $4.5 million for a fast rail study at this point when we need money for Troopers. We need money for prosecuting attorneys. So I’ll be looking at those items first before we really get into talking about any reductions in terms of cuts in programs first.”

He also said he would increase spending on rural education and would not close small schools. “What I want to do is beef up what we have in the regional areas like Kotzebue, Nome, Barrow, Bethel, so that kids can go to school there, potentially take some college classes,” Dunleavy told AFN.

KTVA debate, Aug. 17: At the 36-minute mark, Dunleavy said he would not cut public education spending, the Pioneer Homes, the court system, prisons, Troopers, Power Cost Equalization, the prison system or the University of Alaska. He would not answer “yes or no” if he would cut Medicaid, but said “Yes, make it more efficient.”

Dunleavy said he wanted to limit the operating budget to $4.1 billion to $4.3 billion and allow it to grow at 2 percent a year. “If we’re able to do this we can grow ourselves out of this predicament with the new oil finds that are close to the pipeline,” he said.

He said he would cut the fast rail study and “climatologists.”

Alaska Public Media, Sept. 4: Dunleavy said he has plans to cut $450 million from the state budget in ways that will make government more efficient and not lead to any reduction in services.

Just before the 26-minute mark, he said he would cut 2,000 funded but unfilled positions to save $200 million, save $100 million with a voluntary school district health insurance consolidation plan, and save $150 million by making Medicaid more efficient.

"That could get our budget down to about $4.1 billion without cuts. If we get our budget down to about $4, $4.1 billion, somewhere in that neighborhood, and then let it grow—the operating aspect of the budget, the operating side of the budget—at about 2 percent a year, we can maintain, we can keep up with some inflationary costs at 2 percent a year. But it also gives us some breathing room to get these other resources on line, to get this other oil in the pipeline and increase our revenue stream,” he said.

Anchorage Chamber of Commerce, Sept. 10: Just before the 16-minute mark, he said a budget of $4 billion a year that would grow at 2 percent a year would buy the state time to get 300,000 more barrels of oil in the pipeline.

Alaska Chamber of Commerce, Oct. 24: He said he would use funds from the Constitutional Budget Reserve if necessary to fill the deficit. After the 23-minute mark he said the state had 2,000 funded but unfilled positions that he would take money from to fight crime. He said he would not fund the fast-rail study or climatologists.

Anchorage Daily News, Aug. 16: “If we can contain this operating budget at about 2 percent growth per year with a baseline ideally of $4.3 billion, we have a chance to grow this economy and be able to pay for the budgets going forward. So at an operating budget of about 4.3, you’re looking at about $80 some million growth per year at 2 percent. We can pay for this through the CBR’s (Constitutional Budget Reserve’s) fees and settlements that it receives on average every year, about $100 million. We wouldn’t have to go to the corpus of the CBR to do this.”

“But it’s crucial,” he said. “You can’t eliminate the ferry system in Southeast Alaska, that’s how we get around.”

Originally published on the author’s site, Reporting From Alaska.