It’s time to end the myth of support for Dunleavy’s agenda and turn toward a better future for Alaska. 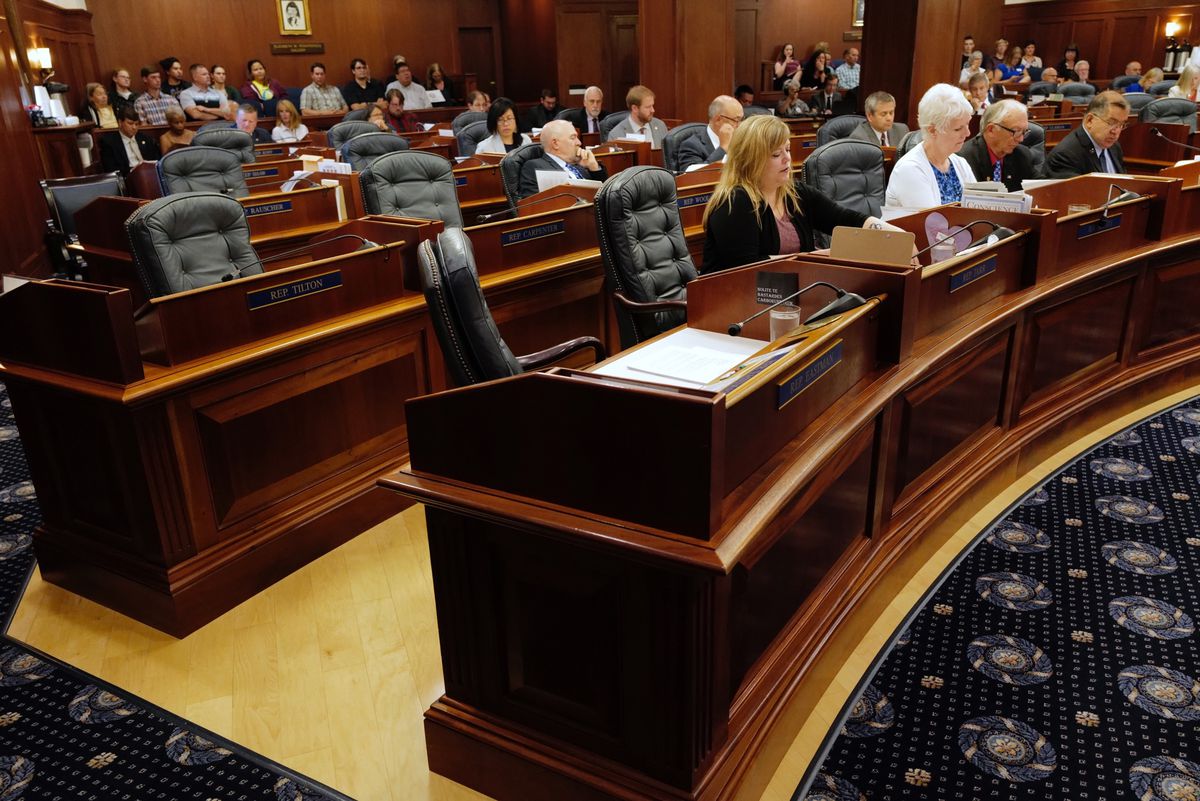 Empty seats are seen at a joint session of the Alaska Legislature, called to consider overriding Gov.Mike Dunleavy's budget vetoes Wednesday, July 10, 2019, Juneau, Alaska. Nearly a third of lawmakers were absent from the session at the Capitol, opting to meet in Wasilla instead, leaving only 38 members meeting in Juneau. It would take 45 votes to override the vetoes. (Michael Penn/Juneau Empire via AP)

Empty seats are seen at a joint session of the Alaska Legislature, called to consider overriding Gov.Mike Dunleavy's budget vetoes Wednesday, July 10, 2019, Juneau, Alaska. Nearly a third of lawmakers were absent from the session at the Capitol, opting to meet in Wasilla instead, leaving only 38 members meeting in Juneau. It would take 45 votes to override the vetoes. (Michael Penn/Juneau Empire via AP)

On paper, the two of us could not be more different: One, a village girl from Bethel, born and raised in Alaska. The other a farm boy from Washington, who followed opportunity, and his love of an Alaska woman, north. However, we both share an abiding affection for this beautiful, boundless place we call home.

Our fellow Alaskans are united like never before. Rallies and protests involving literally thousands of Alaskans, as well as recent polls, show clear disapproval from every corner of the state. Gov. Mike Dunleavy’s agenda and priorities — as expressed through his budget vetoes — have been utterly rejected.

Despite promises of painless "efficiencies” made on the campaign trail, Gov. Dunleavy has taken a hatchet to the state’s budget and services like none before him. The sheer size of these cuts is alarming. What’s more disturbing is that these unprecedented cuts are targeted at students, children, the poor, the homeless, the elderly and victims of domestic violence — essentially, anyone who can’t afford a lobbyist or a seat at the political table.

Under a very different governor, the two of us confronted choices like these. We know firsthand how difficult and heartbreaking these budget decisions are, or at least how hard they should be. Under our former governor, the key was thinking about these dollars in terms of people we could help and problems we could solve. How many kids can we keep in Head Start? How many cancer screenings or treatment beds can these dollars provide? Above all, how can we best use Alaska’s limited resources to provide shelter, protection and opportunities for those who most need them?

Gov. Dunleavy says he’s making the tough decisions for Alaska, but his decisions are really only tough on those in need. In his quest to fulfill his empty campaign promises, he is crushing our children and our elders. Yet, at the same time, cronies and political supporters are rewarded with irresponsible contracts paid for with public funds. This is beyond unacceptable.

Whatever this governor’s interests are, he doesn’t have Alaskans’ interests at heart. He’s not standing tall for Alaska, he’s falling short of basic decency. If he has a guiding principle, it seems to be that “government doesn’t work," and he’s perfectly willing to incapacitate our government to prove himself correct. Although Alaskans have united in opposition to this agenda, the governor has several years left in his term.

But there is hope. There is hope in our separate but equal branches of government. There is hope in a judiciary that has made clear to this governor — in no uncertain terms — that they will not back down to a bully who threatens their funding. There is hope in a Legislature that has shown the ability to work across the aisle and stand up to the governor, even when that governor is from their own party. Legislators as diverse as Bryce Edgmon, Cathy Giessel, Chuck Kopp, Matt Claman, Steve Thompson, Tiffany Zulkosky and many others have all shown tremendous courage to put the interests of Alaska above their own and those of their political parties. Despite coming up short in the monumental task of a three-quarters vote to override the governor’s destructive vetoes, we know they will continue to fight.

And the fight isn’t over because most of all, there is hope in the vast majority of Alaskans who are here to stay — who love their state, and their fellow Alaskans, with their whole hearts. Like those many Alaskans the two of us are ready to work with those who share that belief — to protect, and continue to build, everything that makes Alaska great. True Alaskans have always taken care of each other, and we always will. Alaska first, Alaska always.

Valerie Nurr’araaluk Davidson served as lieutenant governor and the Commissioner of the Alaska Department of Health and Social Services under Gov. Bill Walker.

Scott Kendall served as chief of staff under Gov. Bill Walker. He is now an attorney in private practice.

Valerie Davidson is Yupik, born and raised in Bethel and Aniak. She has spent the last 15 years working in the Alaska Tribal Health System and advocates on both statewide and national levels to improve access and the quality of rural and Alaska Native health care.

Scott Kendall served as chief of staff under Gov. Bill Walker. He is now an attorney in private practice.