Alaskans should vote on the future of the PFD 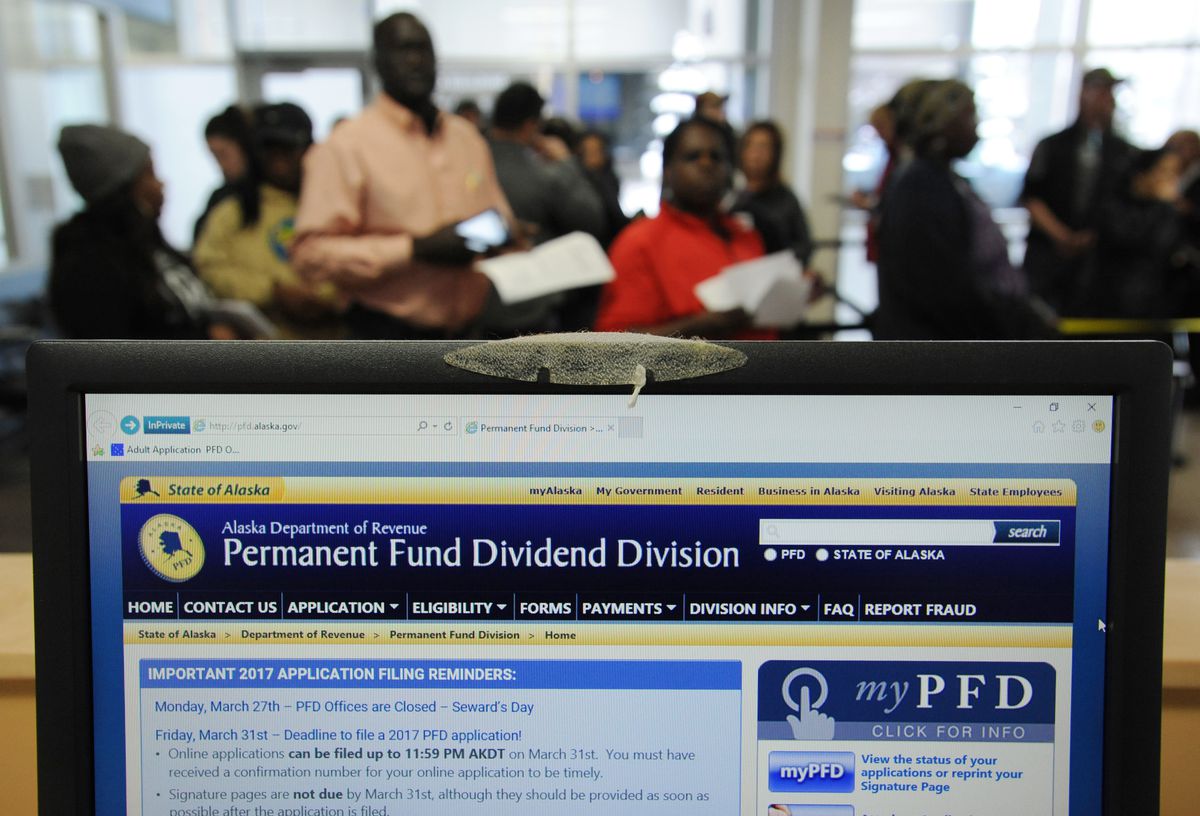 Alaska residents wait in line to file in-person for Alaska Permanent Fund Dividend on Thursday, March 30, 2017, at the PFD office in downtown Anchorage before the filing deadline on Friday. (Bill Roth / ADN)

Alaska residents wait in line to file in-person for Alaska Permanent Fund Dividend on Thursday, March 30, 2017, at the PFD office in downtown Anchorage before the filing deadline on Friday. (Bill Roth / ADN)

The Alaska Permanent Fund dividend is, was and will be in the future a genuinely lousy idea.

In the 39 years since the payout was hatched to buy undying love, support and citizen protection for the fund itself, it has evolved from being the tail wagging the dog to the tail beating the dog to death.

The sad, painful truth: We cannot afford a dividend and all the government services far too many Alaskans seem to want or tolerate, and still balance the budget. Many others could not care less about government or budgets. Balance, schmalance. They want their dough. It is rightly their share of Alaska’s mineral wealth, they will tell you.

To the Legislature, messing around with Permanent Fund dividends is akin to juggling a ticking bomb while committing political suicide. There is only kaboom or ouch! There is no good news. Lawmakers are not going to, in our lifetimes, do what is necessary. It is time for the people — from the single mother in Kwethluk to the UA professor in Anchorage — to vote once and for all on whether to keep the dividend or dump it, whether to protect it in the constitution, with all that entails, or allow it to wither.

[Jenkins: The Permanent Fund dividend was a bad idea. Enshrining it in the Alaska Constitution would be harebrained.]

Many, including myself, are not — and never have been — fans of the dividend. It was bad public policy in 1980 when it was the seed for what grew into a huge, new multibillion-dollar entitlement program. It is bad public policy now, affecting every nook and cranny of Alaska government. Oh, and make no mistake, I unabashedly spend mine with glee and abandon. Conflicted, I just allow myself to feel dirty about it.

The annual payout so beloved by so many of us was center stage in the heated and emotional political falderol of the past few weeks. It triggered dueling legislative sessions, raucous protests by hundreds and blaring headlines promising Armageddon from $444 million in budget cuts made largely to pay full dividends. University cuts. Medicaid cuts. Education cuts. Oh, my. Cities wailed, businesses howled, the horrors seemingly endless and dire, accompanied by predictions of recession and heaven knows what else.

The divisive dividend issue hamstrung this year’s Legislature through its regular and special sessions. It threatens to cost Alaska even more of its savings and promises only more of the same next year.

Enough with the annual celebration of angst. Gov. Mike Dunleavy, at the beginning of the Legislature’s regular session, offered a constitutional amendment that, if adopted, would enshrine in the Alaska Constitution the 1982 law defining how the dividend is calculated. It would promise an annual full dividend. He hoped to have it on the 2020 ballot.

Senate Joint Resolution 5, his dividend amendment, cleared the Senate State Affairs and Judiciary committees and has been awaiting action in the Senate Finance Committee since April 17. House Joint Resolution 6, the companion bill, has been stalled in the House State Affairs Committee since Feb. 20. The amendment would require two-thirds majority in the House and the Senate and then voter approval to become the law of the land.

Dunleavy has made it clear he is determined to have the $65 billion fund’s annual dividend calculated under that 1982 law, one way or another. The formula in that statute has half of the annual earnings, based on a five-year average, going to dividends; the rest stays in the Permanent Fund earnings reserve for another use, another day. This year it would hand each Alaskan about $3,000. He threatened the Legislature he would veto any lesser amount.

Many lawmakers want to ignore — not repeal, ignore — that pesky law, as has been done for the past three years, and shrink this year’s dividend to $1,600 to address the state’s chronic budget gap. They rely on Senate Bill 26, passed just last year, to allow them freedom to reduce setting the dividend amount to political whimsy. The law leaves the “whether” and “how much” of each fall’s dividend to political whimsy. That should give dividend advocates palpitations and promises annual fireworks.

In the long run, the question is: Which is more important, money for government or for Alaskans’ bank accounts? A vote on whether to enshrine the dividend in the constitution would give the definitive answer. Alaskans could opt for smaller government and larger dividends by voting to constitutionally protect the dividends. Or, they could reject the idea of constitutional protection, and, in essence, free lawmakers to do what they need to do with the dividends to make ends meet — which was, after all, the fund’s original purpose.

It is a decision that affects us all. It should be ours to make.