To the moon, Alaska! 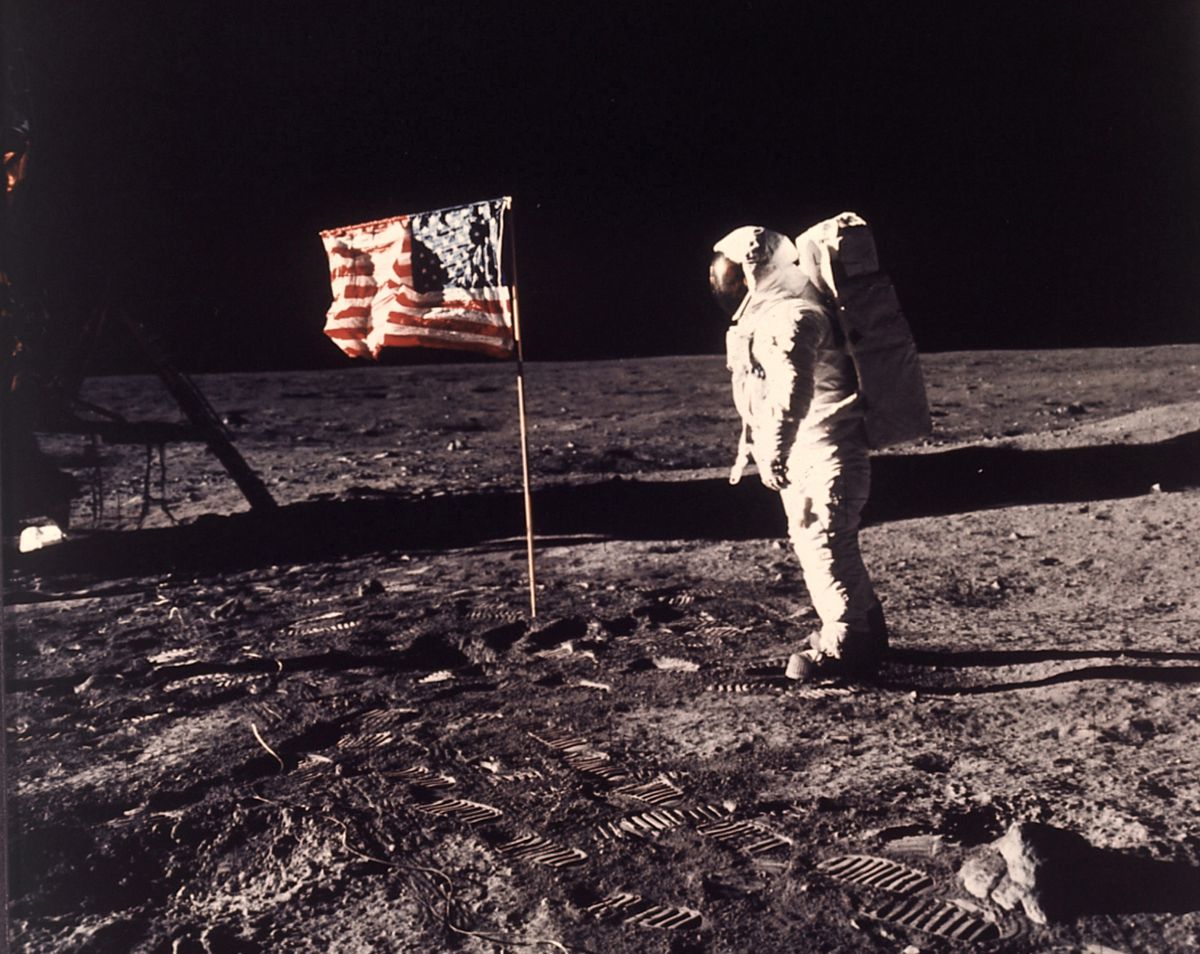 FILE - In this image provided by NASA, astronaut Buzz Aldrin poses for a photograph beside the U.S. flag deployed on the moon during the Apollo 11 mission on July 20, 1969. Television is marking the 50th anniversary of the July 20, 1969, moon landing with a variety of specials about NASA's Apollo 11 mission. (Neil A. Armstrong/NASA via AP, File)

FILE - In this image provided by NASA, astronaut Buzz Aldrin poses for a photograph beside the U.S. flag deployed on the moon during the Apollo 11 mission on July 20, 1969. Television is marking the 50th anniversary of the July 20, 1969, moon landing with a variety of specials about NASA's Apollo 11 mission. (Neil A. Armstrong/NASA via AP, File)

I met two of the Apollo 11 astronauts — Buzz Aldrin and Michael Collins — on their inaugural trip to Alaska in July 2001, a thrilling and meaningful encounter.

Their primary mission was to fish for king salmon on the Kenai River. But the astronauts were also here as VIP guests to commemorate the first anniversary of the Challenger Learning Center of Alaska, our state’s only space science education center for children. Alaska’s U.S. Sen. Ted Stevens, himself a former World War II pilot and a tireless advocate for Alaska aviation, secured the bulk of the necessary construction funds via a special one-time federal appropriation.

This month marks the 50th anniversary of one of humankind’s most miraculous, awe-inspiring feats of history — Apollo 11. Under massive constraints of time, money and risk on every level, we developed the ingenuity, technology and teamwork to safely launch Neil Armstrong, Buzz Aldrin and Michael Collins to the moon and back.

The cosmic endeavor cost billions of dollars and took hundreds of thousands of people from all across the country working in sync to make the epic journey happen. And yes, it was rocket science — the best and brightest rocket scientists. And the ranks included the top engineers, computer technicians, metallurgists, test pilots, satellite inventors and MIT graduates.

But the people working behind the scenes at NASA — excellent administrators, data entry clerks, secretaries, accountants — also exemplified the kind of resolve and dedication that the star test pilots oozed in their DNA.

Apollo 11 is a great example of how politics, economics and imagined realities sometimes align to reach what seems like an impossible common goal. Looking back on it now, it really is a marvel it ever happened. We didn’t always solve everything by filing lawsuit after lawsuit and pointing fingers. Or by being so rigid and inflexible that there was no willpower for compromise.

If we pause to take an evolutionary look back, our species, Homo sapiens, has survived thanks to superb capacities for cooperation between groups, as the Israeli anthropologist, Yuval Noah Harrari points out in his bestseller, “Sapiens.”

Historically, something else has bound Homo sapiens together, Harrari says, while paradoxically, also tearing us apart: our fictions. The whole array of communal beliefs, myths, stories and imagined realities we choose to believe in have also led us to undertake monumental, risky explorations into the unknown.

These astounding moments of convergence and alignment, such as the Apollo program, are something to think about as we face the most vexing and monumental issues of our day, i.e., global climate change, how to repair the Earth’s biosystems, how to save the oceans, how to feed the world’s population.

Michael Collins, who was also a member of the Gemini 10 crew, told reporters it wasn’t circling the moon that dramatically changed him, it was seeing the Earth from 239,000 miles away. “It’s not just a rock. It’s a fragile place,” he said, “and we need to do a better job of protecting it.”

What’s troubling in our current political atmosphere, though, and what can cause a sense of despair to sink in, is that due to the modern breakdown in community values, in family and in our unifying myths, we have forgotten how to bridge the gulf of differences that separate us. Alaska right now is the perfect example of rancor and splintering.

As a society, we have become more scientifically polarized and less likely to read in-depth. We resort to emotionalism, stereotyping and name-calling. Fostering real dialogue between opposing groups is an ideal often promoted by elected officials, voters and party members. In reality, however, there isn’t much evidence to prove that fostering real dialogue as a way to get from A to Z has been implemented in practice. Cooperation goes up in smoke.

In the volatile decade of the 1960s, not everyone believed America should prove its superiority against the USSR by spending astronomical amounts of taxpayer dollars on space program stunts. Many critics viewed space travel as a total waste of precious resources while important social programs languished.

Yet the naysayers at the time were a real part of authentic public dialogue. They kept NASA sharply focused on goals and objectives. NASA had to be truthful. They had to answer the controversy in the language of numbers, cost overrides, balance sheets and budgets.

NASA also spoke to the public and Congress in inspiring terms, not only in dollars and cents. They used brilliant public relations tactics, no doubt, by using various members of the astronaut corps to ignite passion and imaginations, to appeal to humanity’s sense of awe and wonder.

Instead of concentrating on whatever commercial products might result from Apollo 11, NASA appealed to a belief in something far greater to rally Americans. To probe the universe. To answer an insatiable hunger to gain more knowledge. To foster a “can-do” problem-solving spirit. To push forward into the future against insurmountable odds (which also produces uncharted consequences).

Most importantly, instead of continuously bashing and humiliating the opposition — those evil Soviets — through hateful Cold War rhetoric, NASA actually mentioned future cooperation as a possibility. After Apollo 11, Neil Armstrong traveled on a kind of diplomatic mission to the Soviet Union. Armstrong was warmly received as a hero by our “enemy.” Both superpowers extended a hand to one another through the International Space Station and other shared scientific efforts.

Neil Armstrong and Buzz Aldrin left their indelible footprints on the moon’s bleak surface, in its “magnificent desolation,” as Aldrin described it. Col. Michael Collins, the lunar command module pilot, is the least well-known of the three elite astronauts. Humble and self-effacing, he’s the astronaut I most closely follow. Collins, age 88, has remained 100% satisfied to be, metaphorically speaking, in the moon’s shadow. A member of a distinguished military family, he has always viewed himself as an equal member of the Apollo 11 team. He hasn’t cared in the least that no action figures were ever created in his image.

Once he left NASA, Collins, a United States Military Academy graduate, became the founding director of the Smithsonian’s Air and Space Museum in Washington, D.C., and later, a trustee for the National Geographic Society. He’s been inducted into many halls of fame. He still enjoys fishing and has become a visual artist.

We all know that Alaska and the country have greatly changed since Apollo 11 and joy was shared on everyone’s faces at the ticker-tape parades.

At a South Anchorage park recently, I struck up a conversation with a retired military man who was having fun flying his expensive Maverick Air drone in the skies above me. The high-tech drone supports his photography hobby. There are probably more aircraft flying around Alaska today than ever before, he said. More than 50 new F-35 fighter jets will be based at Eielson AFB in Fairbanks, as Alaska has not lost its strategic importance. We are now living in an era of unmanned aerial vehicles. Drones are here to stay. Rovers send back mind-boggling images from the surface of Mars. Nobody knows whether Homo sapiens will ever make it to Mars. I’m not sure if the Red Planet, 140 million miles away, really generates any excitement in the public’s eye.

The souvenir snapshots of Buzz Aldrin and Michael Collins I took 18 years ago in Kenai will now be passed on to my four-year old grandson. One of his bedroom walls is decorated with painted renditions of the planets. Together, we often dash outside to count the numbers of airplanes we hear soaring over his house. He doesn’t yet understand who Michael Collins is, but soon enough, he will.

Kathleen Tarr serves on the board of the Alaska Humanities Forum and is the author of “We Are All Poets Here.”