The lunacy of the PFD fight 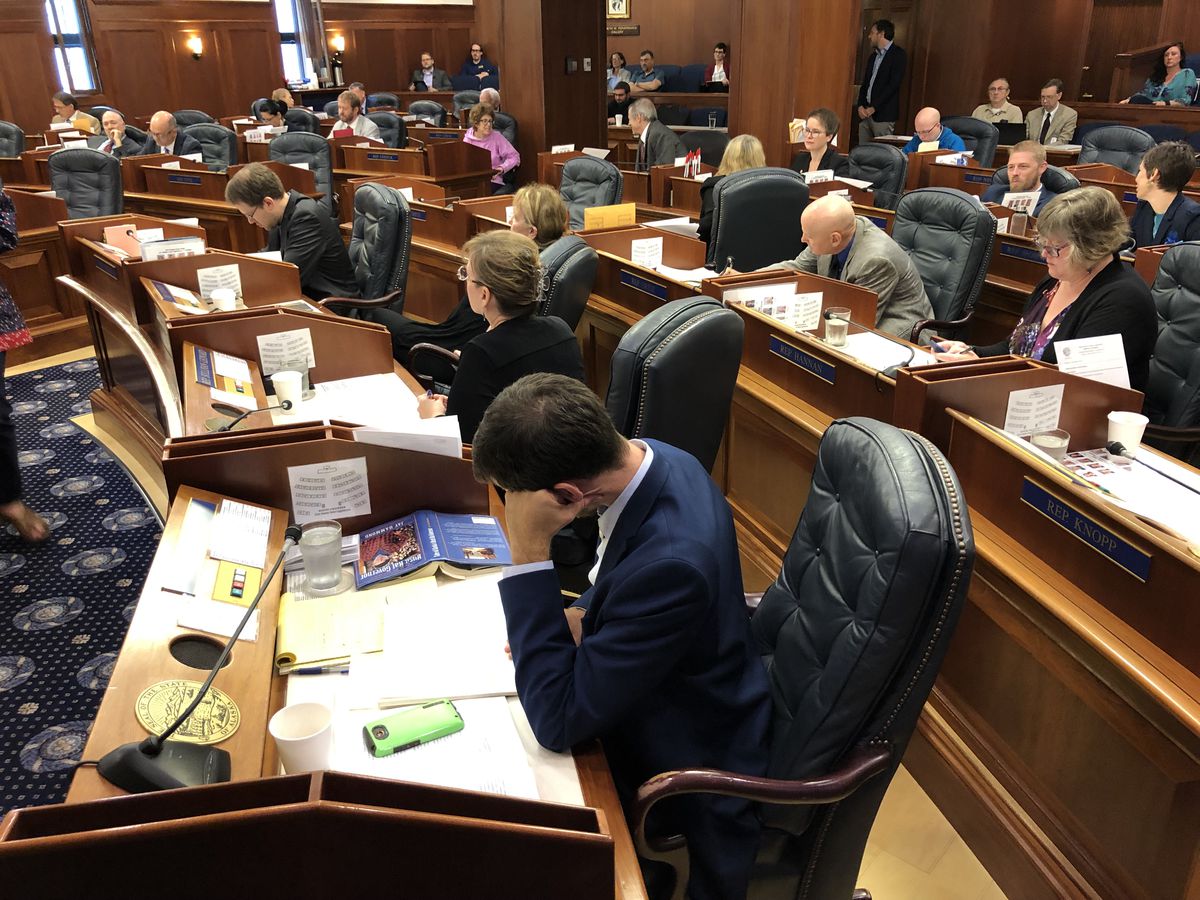 Rep. Zack Fields, D-Anchorage, studies paperwork as he and the rest of the Alaska House of Representatives prepares to vote on House Bill 2003 on Friday, July 26, 2019. If approved by the Senate and governor, HB 2003 would pay a $1,600 Permanent Fund dividend this year. (James Brooks / ADN)

Rep. Zack Fields, D-Anchorage, studies paperwork as he and the rest of the Alaska House of Representatives prepares to vote on House Bill 2003 on Friday, July 26, 2019. If approved by the Senate and governor, HB 2003 would pay a $1,600 Permanent Fund dividend this year. (James Brooks / ADN)

Like many Alaskans, I’m dismayed at how the debate over the size of the Permanent Fund dividend has degenerated into cutthroat politics, pitting Alaskans against each other.

I’ve always felt the small-town character of our state, where many people know each other, would allow us to work out our disagreements in a more reasoned manner.

No more, it seems.

Former Gov. Jay Hammond, who passed away in 2005, would be dismayed at how the PFD has divided Alaskans and corrupted our politics. Civil debate is no longer how to improve schools or solve homelessness, but about the size of the annual dividend check.

It’s obvious, too, that many Alaskans, a lot of legislators and possibly our governor, have little knowledge of the history of the Permanent Fund and the dividend, and how they work.

I forgive ordinary people who are busy earning a living for this, but I’m not so forgiving to elected officials who should know better.

You wouldn’t know it now listening to those who see the PFD as an entitlement, but the dividend was actually quite controversial when it was created, and almost didn’t pass the Legislature. Many Alaskans were true conservatives in those days and were dubious about the state handing out checks.

Gov. Hammond and a group in the state House pushed the dividends, but there was a lot of opposition from other legislators, particularly in the Senate, where there were worries about the dividend diverting money from sorely-needed public infrastructure. Hammond had to strong-arm senators with threats to veto the state capital budget to get the votes, and even then the margin was narrow.

When the Permanent Fund was created in 1976, there was no discussion about a dividend. The idea was mentioned once during a legislative hearing by a consultant, but there was no public discussion.

I served on an advisory board to Hammond and in a long series of public forums we held in the late 1970s on how Alaska should handle policy issues, including our new oil wealth, I don’t recall any mention of a PFD.

All that was years ago, however. Memories fade and myths develop. One myth I heard a lot of during public meetings on the PFD this spring and early summer was that the dividend is the “people’s share” of state oil wealth. In a symbolic sense, that can be true – people are free to believe it because the PFD does represent a public sharing of some of the Permanent Fund’s income, but there is no legal basis of a private right to this public resource or that the PFD is guaranteed.

In fact, when Congress passed the Alaska Statehood Act in 1959, our new state was given a generous land endowment, including mineral rights (the basis of future oil wealth), but the state was forbidden to sell or privatize its mineral rights. Leasing of extraction rights was allowed, however. which we do.

This prohibition in the statehood act cuts against any notion of a private right, through the PFD, to an individual’s direct share of oil ownership.

Congress’s reasoning for this is buried in the committee records, but the common belief was that congressmen were worried about the young state’s ability to support itself and wanted to encourage natural resource development to provide revenue for public services.

The prohibition was inserted to forestall any temptation by Alaskans to sell off resources, other than through orderly leasing programs, to get quick bucks. In its wisdom, Congress was protecting us from ourselves.

But while the state can’t legally grant a private right to oil income the Legislature, which has the sole authority to appropriate funds, can certainly develop a mechanism to share the wealth, which it did in creating the PFD in statute.

However, our constitution gives the Legislature the flexibility to change any statute any time, including that for the dividend. The PFD also requires an appropriation every year in the budget, and despite the existence of a 1980s-era statute that guides the calculation of the dividend the amount is purely up to the Legislature.

The existing formula was designed at a time when the Permanent Fund consisted mainly of investments in bonds and it worked well at the time. When the Fund diversified into stocks and other equities distortions began to appear but legislators essentially followed the formula over the years because the Permanent Fund was small at the time and the PFDs relatively modest, but most important because state oil revenues were ample. State leaders were preoccupied with other issues that were more important at the time and left the PFD formula alone.

Then came 2016, when state oil revenues dived, and the Permanent Fund, its earnings and the PFDs had grown. The need to use some Fund earnings became apparent. Reducing the PFD was part of that, even though the dividend remained high by historical standards.

We certainly face a political collision over this now. As he campaigned, Gov. Mike Dunleavy promised a “fully-funded” PFD under the old formula, which works out to about $3,000 this year.

There is strong pushback from most legislators and many in the public, however. To pay for the large dividend, the governor has effectively cut the state budget through vetoes. Critics feel huge cuts to the University of Alaska and social services for needy Alaskans, through vetoes, aren’t worth the $3,000 PFD.

Others, however, argue their families need the large dividends to help ends meet. It’s hard not to be sympathetic.

It was interesting to me, however, that in hearings by the House Finance Committee on the PFDs last week, many who argued for the larger checks also said they would be willing to pay modest state taxes to help support public services.

One person said she arrived in Alaska in 1977 and paid a hefty state income tax. If the taxes Alaskans paid then were adjusted for inflation, she said, they would bring $1.4 billion yearly into the state treasury. That’s easily enough to cover the budget deficit and even pay for the PFD. Alaskans now essentially pay no state taxes as individuals. The state is still supported by oil revenues and, now, a portion of Permanent Fund earnings.

Other Americans look at our political fight over the PFDs and think Alaskans are nuts. They’re right.

Tim Bradner is co-publisher of the Alaska Economic Report and Alaska Legislative Digest.