If the university is a house on fire, Gov. Dunleavy is the arsonist 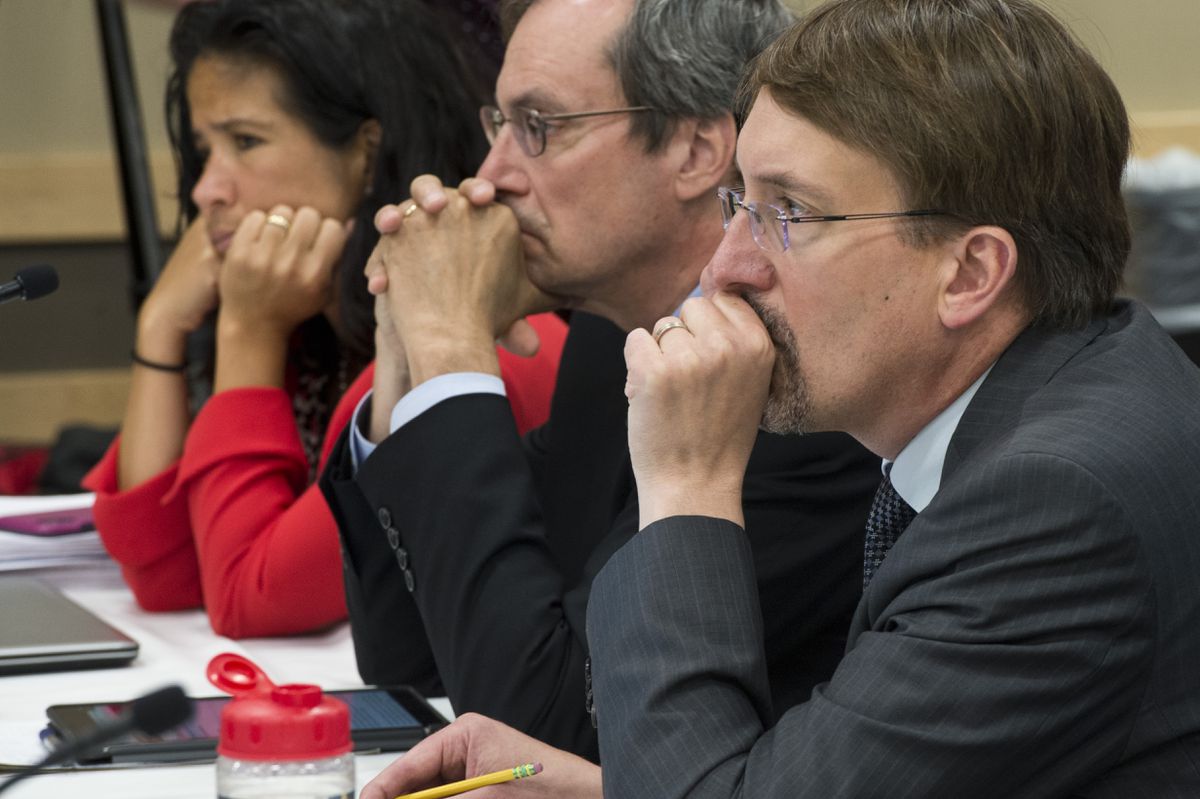 The University of Alaska Board of Regents met in Anchorage last week to discuss the financial “exigency” created by Gov. Mike Dunleavy’s budget cuts. “Exigency” is one of those $10 words, like “eleemosynary” and “prestidigitation,” that pompous professors and overpaid lawyers use to impress the lower orders. I looked around the handsome Gorsuch Commons, located in a leafy woodland setting, and saw no signs reading “Break Glass In Case of Exigency.”

But the university emergency is real, and you could see it in the faces and hear it in the voices of the regents, university administrators, students and faculty who gathered in a conference room holding about about 100 people.

The meeting was schedule for 9 a.m., but I arrived at 8 a.m. to scout the room and see who would show up early. Board Chairman John Davies of Fairbanks was there — no one else. He was sitting at the center of series of tables laid out for regents and ranking university administrators. Davies, a tall man certainly now older than 60 sporting a white beard, is a former legislator, a former member of local government in Fairbanks and a scientist by training. He was scrolling through his laptop, focused. I figured he had plenty to worry about and did not approach him. But he knows me and turning from his work, he waved. I walked over, said hello, and wished him well. He absent-mindedly thanked me, and I returned to the bleachers while he remained in center field.

Administrators began wandering in with laptops and cups of coffee. They knew each other, began talking. Some were from out of town.

I heard a suggestion that Gov. Dunleavy himself would appear before the board. I thought “Really?” The appearance was soon qualified: by videoconferencing technology. He would be in Juneau.

Almost four hours later, just before noon, Chairman Davies confirmed to the packed room that Gov. Dunleavy would drop in via conferencing at noon. He suggested that the regents and university personnel take a few minutes to get their lunch (probably catered by the university) and use the break to listen to the governor.

Gov. Dunleavy arrived from Juneau at noon sharp, sitting in a Capitol conference room. Videoconferencing, in my experience, is a bit strange because the voice or voices are so clear and immediate while the person speaking is a shadow on the wall. I’ve seen this in court where the bailiff tells those in the Anchorage courtroom, “All rise,” and all do rise as the berobed judge in Reno swishes into court on a flat screen overhead.

Dunleavy spoke for six minutes, about the time it takes NFL officials to sort out a contested pass interference call on Monday Night Football. This was gubernatorial interference in the future of the state university.

The governor told the room that he has many ties to the university — he has a degree, studied in different part of the state, his daughters attended — establishing his kinship with the university. But some people believe we are living in the world of oil at $85 or $95 per barrel, he continued. We’re not, he explained — with the obvious implication that cuts must follow.

Dunleavy then turned to the species of verbal evasions used by the boss who can’t bring himself to tell an employee, “You’re fired,” and instead notes in passing, “You’ve been downsized.” The governor said he wants a “conversation,” “a step-down approach,” “a focus on outcomes,” “an understanding.” He finally closed with the importance of “cutting expenditures.”

An hour or more before the governor spoke, university President Jim Johnsen told the regents “Our house is on fire,” a metaphor many in the room repeated throughout the day. Dunleavy never acknowledged the house fire. Nor did he acknowledge that the proposed “conversation,” and the desire for “understanding” were forced on him by statewide, bipartisan rage in response to the cuts.

Dunleavy presented himself as a reasonable man making a reasonable offer. The truth is, expanding Johnsen’s metaphor, Mike Dunleavy is as reasonable as an arsonist coming down your driveway with a blow torch and a five-gallon can of gas.

After Gov. Dunleavy delivered his six-minute evasion, Mike Barnhill of Dunleavy’s Office of Management and Budget took the floor to explain the cuts in more detail. Have you ever stood on the beach at midday and watched the fog come in? That was Barnhill - the fog. Hunched at table provided for him, Barnhill seemed more like a sad supplicant than as ax man as he wandered hazily through his respect for the regents, his desire for a new discussion, his hope for compromise, the role of metrics, his concern about cost drivers, a two year step-down, and new “opportunities” to raise money from alumni and other “stakeholders.” Barnhill knew he was dealing with a hostile, if subdued, audience, and listening to his wan voice, watching his sad body language, I wondered if this was Eeyore telling his troubles to Christopher Robin and friends. A sad salesman is not a successful salesman. But maybe Barnhill knew his mission was not a sale, but to show the Dunleavy flag and return to Juneau with the Dunleavy message intact.

The regents' debate about what to do in response to the cuts was lengthy, befitting modern democratic politics. Many points of view had to be heard, many perspectives entered into the record, occasional foolish arguments endured and acknowledged. The process was slow, with alternative proposals demanding respect. Chairman Davies kept things moving with the self-discipline of someone who has spent hundreds of hours listening to men and women arguing, debating, imploring, demanding and knew what to expect.

Before the meeting ended, the regents voted 8-3 to ask Johnsen to consolidate the university into one accredited university, undoubtedly a smaller, more vulnerable university. This is not putting out the house fire - it is not even constructing a new house. It is building a hovel out of blackened two-by-fours and bronzed bricks that have survived the flames.