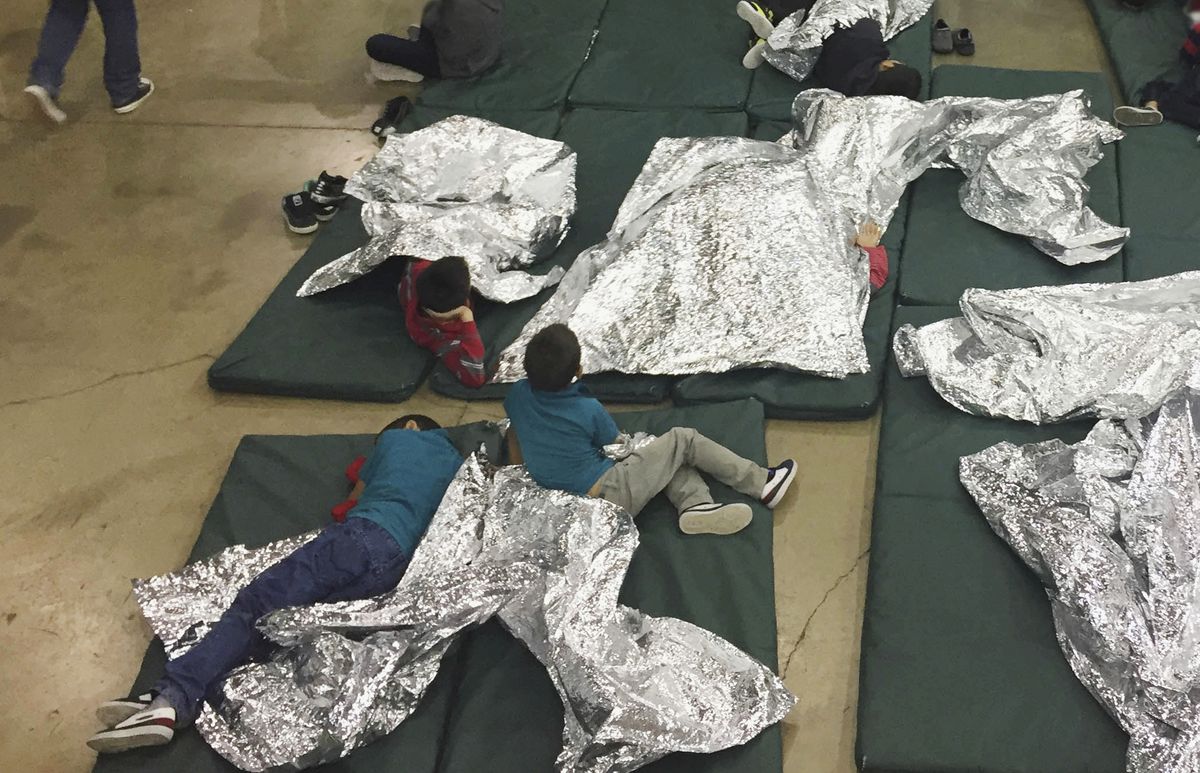 FILE - In this Sunday, June 17, 2018, file photo provided by U.S. Customs and Border Protection, people who've been taken into custody related to cases of illegal entry into the United States rest in one of the cages at a facility in McAllen, Texas. Immigrant children described hunger, cold and fear in a voluminous court filing about the facilities where they were held in the days after crossing the border. Advocates fanned out across the southwest to interview more than 200 immigrant parents and children about conditions in U.S. holding facilities, detention centers and a youth shelter. The accounts form part of a case over whether the government is complying with a longstanding settlement over the treatment of immigrant youth in custody. (U.S. Customs and Border Protection's Rio Grande Valley Sector via AP, File)

FILE - In this Sunday, June 17, 2018, file photo provided by U.S. Customs and Border Protection, people who've been taken into custody related to cases of illegal entry into the United States rest in one of the cages at a facility in McAllen, Texas. Immigrant children described hunger, cold and fear in a voluminous court filing about the facilities where they were held in the days after crossing the border. Advocates fanned out across the southwest to interview more than 200 immigrant parents and children about conditions in U.S. holding facilities, detention centers and a youth shelter. The accounts form part of a case over whether the government is complying with a longstanding settlement over the treatment of immigrant youth in custody. (U.S. Customs and Border Protection's Rio Grande Valley Sector via AP, File)

Alaska state law clearly identifies the duties and responsibilities of what are defined as “mandatory reporters,” or those required by law to report the suspected abuse, neglect or other mistreatment of children. These mandatory reporters include medical personnel, day care providers, and public school teachers. Under Alaska Statute 47.17, mandatory reporters have a responsibility to report if they “have reasonable cause to suspect that a child has suffered harm as a result of child abuse or neglect.” It further clarifies “reasonable cause” to mean “based on all the facts and circumstances known to the person, that would lead a reasonable person to believe that something might be the case.”

As a public school teacher, I am writing today to honor that responsibility and report the abuse and neglect of thousands of children at immigration detention facilities throughout our country. This neglect and abuse cuts to the core of our humanity and must be stopped.

As of May, 2019, more than 13,000 children have been incarcerated in the innocuously named “detention centers” throughout our once welcoming nation and the Department of Health and Human Services has taken custody of more than 40,000 children this year alone with an average length of stay in these camps of 45 days. Thousands of children have been forcefully separated from their families or other caregivers and put into ad-hoc prisons for a month and a half. The only reason? They were not born in the United States. If your feet first hit soil on one side of an artificial boundary, should you be subjected to government sanctioned separation, neglect, abuse, or, as is the case with 22 children in the last two years and six children this year as of May 24, death?

The reports coming from these concentration camp-like conditions include the denial of any education or schooling, removal of recreational activities, lack of access to clean bedding, clothes, or even diapers, spoiled food, non-functioning toilets and sewer facilities, among other deplorable conditions. In some areas, we, the people of the U.S., are literally holding human beings in cages normally used for animals in extreme heat with limited or no access to proper hygiene or sanitation. There are even reports of United States government employees separating nursing children from their mothers and using the withholding of medications as punishment. This is not us. This cannot continue. This cannot be allowed to become us.

As a white, non-Alaska Native speaking from an undoubted place of privilege, I have to be honest with myself and make the obvious connection to our not-so-distant, shameful Alaska history with the separation of Alaska Native children from families and communities to attend regional boarding schools. Schools that were also rife with government sanctioned neglect and abuse. The resulting trauma from this era still resonates throughout Alaska, decades after the practice officially ceased. How many generations of trauma will result from this new forceful separation and abuse of children? When these children do arrive in our communities, will we be prepared to help them recover from this trauma and become the productive United States citizens they dream to be?

Now, before you retort with talk of immigration policy or try to deflect by interjecting that this practice started under President Barack Obama, I don’t care. I don’t care who started it and neither should you. The abuse of any child cannot be argued away with “whataboutism” and false equivalencies. There is no rational connection between immigration policy and the criminal neglect and abuse of children. This is not a binary situation. We can treat all humans with the dignity and basic care they deserve and still debate the best path forward for our country in terms of immigration. We are a country full of resources and powerful ideas. To think that we can’t discuss and shape immigration policy while also treating humans properly, not to mention legally, is selling our country short.

As a mandatory reporter, I am fulfilling my legal duty and reporting this abuse and neglect to you, Alaska. I am calling on all Alaskans to do the same and speak out and pressure Sens. Lisa Murkowski and Dan Sullivan and Rep. Don Young to do the moral thing and immediately call for an end to this practice and the inhumane treatment of all asylum seekers. We can do the morally correct thing and also work on our immigration system at the same time. I am also calling on all Alaska companies, including Alaska Native corporations as Alaska’s largest homegrown corporations, to divest any and all interest in companies and subsidiaries involved in this current practice. No company should make a single dollar off the abuse and neglect of any other human, especially our children.

Alaska companies are making millions of dollars in immigration-related contracts. For example, an Ahtna subsidiary, Ahtna Support and Training Services, LLC, is heavily involved in the operation of the Port Isabel Detention Center near Los Fresnos, Texas. While this facility technically houses only adults, it houses separated adult family members and has been the location of botched reunifications. Regardless of any scores on audit reports, which on paper tell one story, the fact that Alaska companies are making millions of dollars off the separation of families wanting nothing more than a better life should be of grave concern to us all and is certainly against Alaska values.

NANA, through its subsidiary Akima Global Services, currently has tens of millions of dollars coming from the Krome Detention Center in Virginia, and Bering Straits Native Corp. subsidiaries were also involved in detention facilities as recently as 2018 according to the government contract database. They, and any and all other companies involved, should immediately cease any involvement until conditions and processes are improved and children are no longer being separated and denied their rights under the Flores Agreement. History will not look kindly on us on for this, just as it does not look kindly on our internment of Japanese Americans during World War II or our tragic treatment of Alaska Native children. We have a chance to be on the right side of history, but only if we speak up. On an issue as grave as this, we are all mandatory reporters.

Ben Walker is the 2018 Alaska State Teacher of the Year and a member of Teachers Against Child Detention.