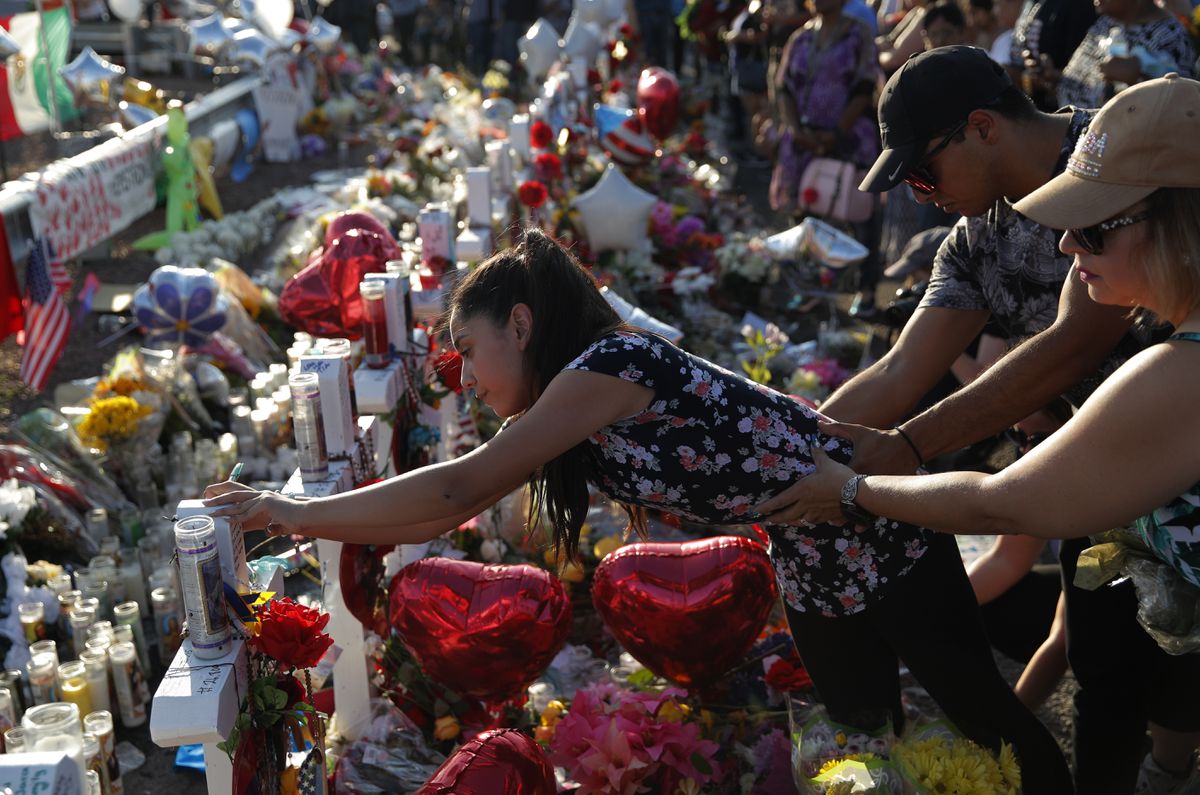 A woman leans over to write a message on a cross at a makeshift memorial at the scene of a mass shooting at a shopping complex, Tuesday, Aug. 6, 2019, in El Paso, Texas. (AP Photo/John Locher)

A woman leans over to write a message on a cross at a makeshift memorial at the scene of a mass shooting at a shopping complex, Tuesday, Aug. 6, 2019, in El Paso, Texas. (AP Photo/John Locher)

Again there are more mass shootings, and again there are calls for banning assault weapons. While both sides passionately plead their cases, there is very little data used to provide for rational decisions.

First, the weapons of concern are semi-automatic rifles that look like the military rifles they are modeled after, can shoot one shot per second, and with detachable magazines, can shoot many bullets in a few minutes. I will refer to these as AR-AK.

Second, it is estimated that there are between 15 million and 30 million AR-AK weapons in private hands. For discussion purposes, I will assume that there are 16 million. These are owned by an estimated 8 million people.

Third, since 2010, there have been between 71 and 160 deaths each year from mass shootings. I will assume 160. In addition, though AR-AK weapons have only been involved in one-half of the shootings, I will assume that they were used in all occasions.

So each possession of 100,000 AR-AK weapons results in one murder in a mass shooting. With a U.S. population of 320 million people, this means your chance of being killed in a mass shooting in any given year is one in two million.

How does this compare to vehicle traffic deaths? There were 36,750 deaths last year from an estimated 276 million privately owned vehicles. Use of 7,500 vehicles results in a traffic death, or 222 deaths for each two million people.

So the driving of privately owned vehicles is 230 times more deadly than the possession of the AR-AK weapons. Each vehicle is 13 times more likely to cause a death than an AR-AK weapon.

One consideration is that possession of arms is a constitutionally protected right. Driving is not a right guaranteed by the Constitution.

About 165 drivers who are 16 years old die each year driving themselves. The number of passengers dying in these accidents is not known. Raising the minimum driving age to seventeen could save as many lives as are lost in the worst year of mass shootings.

Even if all AR-AK weapons could successfully be removed from private ownership, the person determined to indiscriminately kill others could use other ways. In 2017, a van was intentionally driven into an evening crowd in Barcelona, killing 13 people and injuring 130 others. In 2013, the Boston Marathon bombers used homemade devices to kill three people and injure several hundred. In 1995, members of Aum Shinrikyo released sarin gas in the Tokyo subway, killing 13 and injuring a thousand more. Also in 1995, Timothy McVeigh used a van filled with fertilizer explosive to kill 168 people and injure 700. The 1983 bombing of a hotel being used by Marines in Beirut was from an explosive-loaded truck, collapsing the building, which killed 307 people and wounded hundreds more.

The point is that evil people are like water flowing down a hill — both will find ways to their end. Removing the weapons of immediate concern will not make us any safer, but may result in the killers using other means that are even worse.

Edward Leach is the president of the Russian Jack Community Council. This column is his personal opinion and does not represent the views of other people or organizations.