State is trying to undermine workers’ rights, not protect them 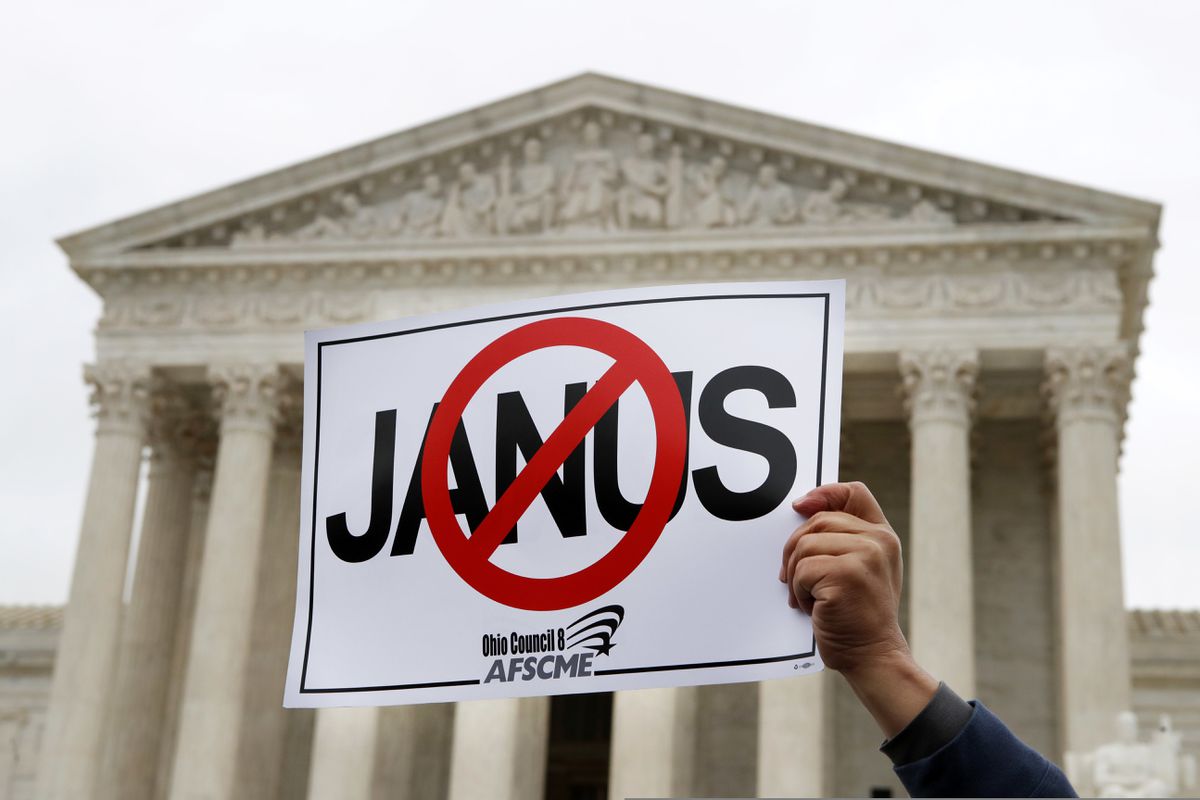 FILE - In this Monday, Feb. 26, 2018, file photo, Stephen Roberts, with the American Federation of State, County and Municipal Employees, holds up a sign against Mark Janus during a rally outside of the Supreme Court, in Washington. Union membership among public employees has fallen only slightly in the nation’s most unionized states since the Supreme Court ruled in 2018 that government workers no longer could be required to pay union fees, according to an analysis of federal data conducted for The Associated Press. (AP Photo/Jacquelyn Martin, File)

FILE - In this Monday, Feb. 26, 2018, file photo, Stephen Roberts, with the American Federation of State, County and Municipal Employees, holds up a sign against Mark Janus during a rally outside of the Supreme Court, in Washington. Union membership among public employees has fallen only slightly in the nation’s most unionized states since the Supreme Court ruled in 2018 that government workers no longer could be required to pay union fees, according to an analysis of federal data conducted for The Associated Press. (AP Photo/Jacquelyn Martin, File)

On Tuesday, Attorney General Kevin Clarkson held a press conference related to a Supreme Court case known as Janus. A lot about the Janus v. AFSCME Supreme Court case really gets into the weeds. But in a nutshell, an anti-union-leaning U.S. Supreme Court overturned decades of precedent established in a case called Abood v. Detroit Board of Education (1977), which stated that if public employees were represented by a union and state law deemed the union the exclusive representative of all employees (members and non-members), the union had the right to collect fair-share fees (dues at a reduced rate) from non-members for the purpose of representing them in collective bargaining. In short, Abood said that you don’t have to join the union, but you can’t be a free-rider on the union’s efforts either. The balance struck by Abood worked well for more than 40 years. Janus, sponsored by team Koch, sought to overturn that in a union-busting effort.

Right-wing pundits and Koch-funded organizations such as Americans for Prosperity and the Alaska Policy Forum claimed a massive victory over the decision. They simply thought people would stop paying dues because the Supreme Court said they didn’t have to. But these extremist organizations lack a fundamental understanding about what it means to be part of a union — to work together to improve the lives of all, not just the individual. They didn’t count on unions educating their members about the numerous benefits of union membership, or the fact that the vast majority of workers would choose to remain union members; in fact, many previous non-members decided to join the union and pay dues to keep their unions strong. So, the initial impacts of the Janus decision landed with a whimper.

Clarkson’s opinion has taken an extremist and inaccurate view of Janus. His interpretation is solidly out of bounds with how every other state is interpreting the decision, and out of sync with court decisions in other states. They assert that the employer, in this case the state of Alaska, has a role in setting the terms of the agreement between a union and its members when the employees choose to join a union. We find this to be preposterous on its face. The Janus decision was about the relationship between the union and the nonmembers the union represents; it simply has nothing to do with the relationship between union members and the state, or the union and its members.

It’s pretty clear to me. Dunleavy knows that Alaska’s unions fight every day to protect the constitutional rights of public employees on the job. By attempting to erode those protections, it makes it easier for him to fire them in retaliation for exercising their First Amendment rights. Pure and simple, this is a textbook example of union busting.

While the governor attempts to gut the rights of public servants, what he doesn’t appear to realize is that unions are more popular with the general public than they have been in 50 years; people who have never been in a union are starting to understand that all this anti-union rhetoric is nothing more than big corporate interests trying to silence the voices of average working folks, all for a profit.

We now face a governor who thought it appropriate to come out with another attack on his employees leading up to Labor Day. Up to this point, he has engaged in cruel and unpopular attacks on the poor, the sick, the elderly and the young, and now he’s topping it off with a slap at his own employees. Of course, he’ll claim it’s for their own good, but the short history of his actions has shown that to be demonstrably false.

Take heart, Alaskans. This Labor Day, the fight continues. Dunleavy’s extremist actions and agenda have demonstrated just how important it is, now more than ever, that Alaska’s workers have collective power through their unions to combat corruption, capriciousness and ineptitude. Thank you to the dedicated men and women who keep our great state running — and to all of Alaska’s working families. We’ll keep fighting for you.

Vince Beltrami is the president of the Alaska AFL-CIO.