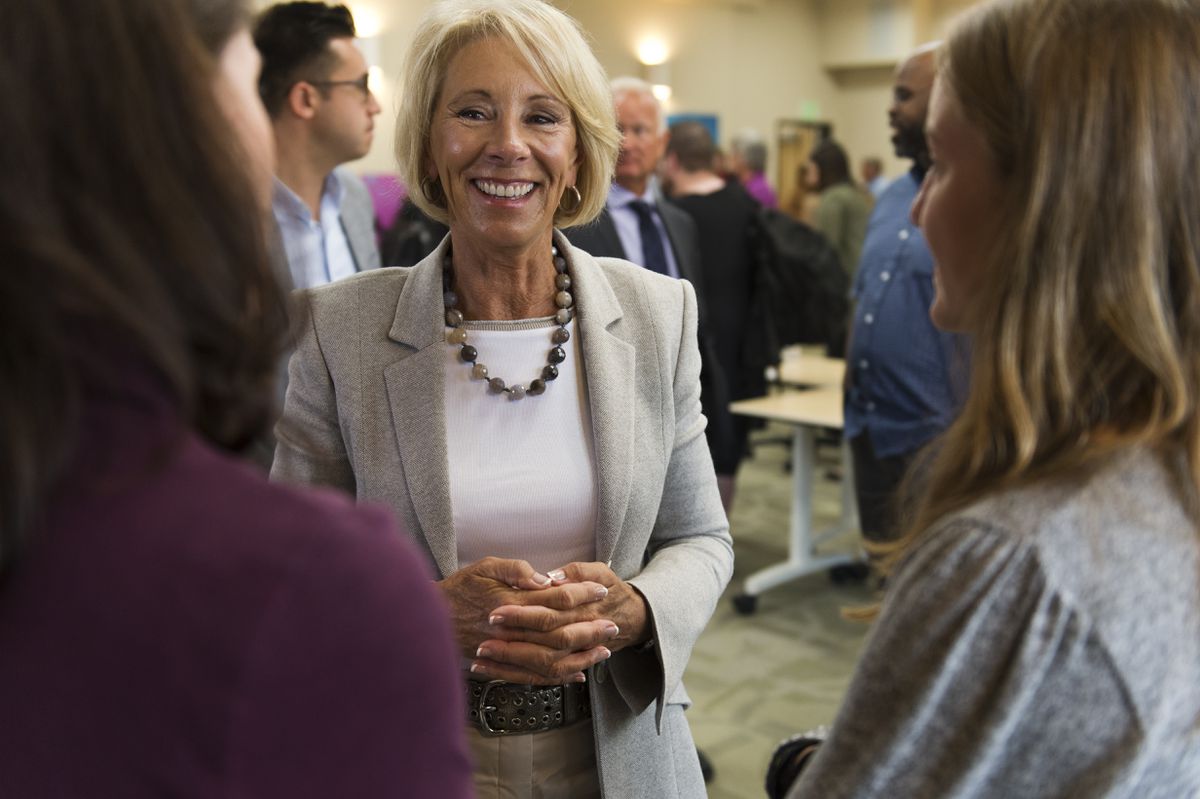 U.S. Secretary of Education Betsy DeVos talks to Anne Zink, left, and her daughter Isabelle, 14, during a visit to Mat-Su Central School on August 26, 2019. Isabelle is a student at the school. (Marc Lester / ADN)

U.S. Secretary of Education Betsy DeVos talks to Anne Zink, left, and her daughter Isabelle, 14, during a visit to Mat-Su Central School on August 26, 2019. Isabelle is a student at the school. (Marc Lester / ADN)

Secretary of Education Betsy DeVos’ recent visit to Alaska has me thinking about bootstraps, but more on that later. To start, I will give Secretary DeVos and Attorney General William Barr credit for visiting our great state, as it is not a common practice among federal officials. However, unlike Barr’s front-line visit to those most affected by his department’s policies, I was disappointed at DeVos’ itinerary. To say this visit was a carefully orchestrated and publicized political parade is an understatement. The choice of schools and words during her visit to one of the most diverse state education systems in the country was red meat for the school choice and privatization movement. Our state administration’s embrace of her radical and immoral ideas is alarming and worrisome and, if implemented, will do untold damage to thousands of Alaska’s youth and set our public schools back decades.

As evident in not only her itinerary, but also her public relations charade, DeVos continues to hawk school choice as a fix to an education system admittedly in need of improvement as the world progresses, but one that is by no means broken. On issues as important and far-reaching as public education, we must separate intent from impact. School choice, like many benignly named radical ideas, sounds great, regardless of its intent. But its impact is exacerbating the very inequities it claims to help close. School choice is just that. It is schools choosing which students have the ability to attend. And those choices most often break along the usual lines drawn by our society’s systemic biases: race, socioeconomic status, learning disabilities and English language learners; the very same groups they claim to be helping.

Unlike places where vouchers and charters have left an educational wasteland taxpayers are left paying for, including DeVos’ home state of Michigan, Alaska is fortunate enough to have our charter schools operating under the public school system which ensures instructional and financial accountability. However, even with that, we see a difference between the schools DeVos publicly visited and our neighborhood schools. School choice, as DeVos wants it, is nothing more than legal neo-segregation, and the impact is not everybody having a choice to go to another school, but rather certain populations choosing to not go to their neighborhood school with “those students.” Those same students, who are continually marginalized in our education system, deserve a doubling-down of investment, not the diversion of public education dollars from neighborhood schools.

Secretary DeVos and the federal administration are also promoting another innocuously named yet detrimental program referred to as the Education Freedom Scholarship. Voucher advocates found a majority of families are happy with their neighborhood schools and reject the idea of public money being funneled to private and religious schools, including here in Alaska. So one of the more devious shell games around was born. With these “scholarships,” any individual or company can give money to a scholarship fund that can be used on a wide variety of unregulated educational needs, including private and religious schools that have limited academic and fiscal accountability and are free to exclude students and families as they wish. The evil twist, however, is that under DeVos’ plan, these donors would get a dollar-for-dollar federal match in the form of a tax credit, taken directly off one’s tax bill.

So while Freedom Scholarship advocates promote the myth that no public money is being used, that is a blatant lie. While it may not come directly from the Department of Education’s budget, it is revenue that is being diverted into the pockets of companies and individuals that could and should otherwise be used on Alaska’s public school children. Public money is being diverted to line the pockets of wealthy donors through tax credits. The $5 billion program technically comes from the Treasury Department; however, DeVos has simultaneously proposed more than $8 billion in cuts to the Department of Education budget, slashing funding for programs that go directly to the most vulnerable among our children for pre-kindergarten, before- and after-school programs, lower class sizes, additional teachers, and so forth. Once again, we must separate intent from impact. The impact of Education Freedom Scholarships is not freedom, it is the continued oppression of the same marginalized groups mentioned above.

If we truly want to provide equitable opportunities for all kids, we need to focus on funding and improving our neighborhood public schools first. We need to invest in attracting and retaining high quality teachers, the No. 1 school-based indicator of student success. (Socioeconomic status is the number one overall indicator of student success, yet beyond the purview of education, even if we are punished for it and asked to fix it.) We need to name systemic bias even if it’s uncomfortable and work to change the system, and ourselves, to better serve a majority population of indigenous and students of color by working to improve our culturally responsive and relevant teaching practices and decolonizing our curriculum and standardized tests. We need to work with our university system to diversify the teacher pipeline so 60% of the students in the Anchorage School District, and 100% of students in many remote districts, don’t have to go the full 13 years without seeing a teacher that looks like them. We have to flood money (such as $5 billion headed for the wealthy through Freedom Scholarships) into pre-K education so all students enter kindergarten ready to learn instead of spending their entire public education trying to catch up while being annually stamped “below proficient” by a testing company in Minnesota at a cost of millions. Every dollar invested in pre-K comes back as much as tenfold in savings and increased production later in life.

Which brings us to bootstraps. You see, there is a fundamental difference between the beliefs of Secretary DeVos and those of us in public classrooms every day. This difference revolves around the central idea of equity and equal access to opportunity. DeVos and those sharing her views firmly believe in the myth of pulling oneself up by their own bootstraps and govern based on a 1950s view of the world. They believe simply offering an opportunity levels the playing field and those that work hard will succeed. They like to believe that if you are suffering in life, it is your own fault and you didn’t work hard enough. As a science teacher, I have to add it isn’t possible from a physics standpoint to pull oneself up by your own bootstraps. Also, it is a harmful phrase that operates on the faulty assumption all students start off at the same point, not only in life, but when they come to public schools. We have to face the fact society has let a significant portion of our own people down and thousands of our kids come to school unprepared and without bootstraps, or even boots, by which they can pull themselves up. We should be investing in those proverbial boots and straps, not widening our inequities with shady tax scholarship programs and biased school-choice initiatives.

Ben Walker is the 2018 Alaska State Teacher of the Year and a proud parent of two children enrolled in their neighborhood school.